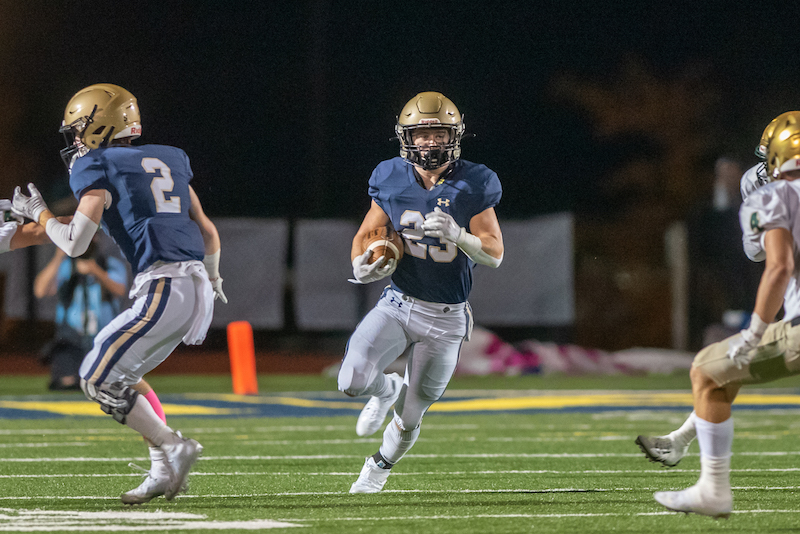 Briarwood’s Luke Reebals will be one of the best returning running backs in the state this year and will look to help a talented team put together a special season in 2021. (File)

The return to the 6A level of play for the Briarwood Lions went about as smoothly as it could in 2020, but 2021 may end up being a year to remember.

Coming off an 8-3 record with a berth in the second round of the playoffs, the Lions enter this season under third-year head coach Matthew Forester as a top-five team in Class 6A and possibly the favorite to win their region championship.

That’s a testament to this coaching staff and the players for not shying away from some of the best teams in the state. The successful season saw them come close to doubling up the team’s previous two-year stint in the 6A classification in just one season.

Heading into this year, that has created new optimism that Briarwood can compete for a state championship at arguably the most difficult and deepest level of football in the state.

The defense will take a hit, but if one side of the ball can afford that, it’s the defensive side thanks to Forester’s presence on that side and his ability to turn seemingly unknown talent into an All-State player each season.

What will help is the return of an exciting offense that will pair well with what the team likes to do defensively.

The Lions will return quarterback Christopher Vizzina and running back Luke Reebals, who accounted for the majority of the team’s offense last year.

Vizzina, who has become one of the state’s hottest recruits in the offseason, threw for 1,969 yards and 13 touchdowns last season with an additional 154 rushing yards.

He stands at 6-foot-4, 200 pounds and has challenged some of the top quarterback recruits in the country at camps this summer due to his ability to thread the needle on any pass.

His success, however, will lean heavily on his comfort level in the pocket and his ability to form a relationship with a receiver.

The latter of those two could make or break the season. As a freshman, there wasn’t a plethora of options at the position for him to throw to, and last year, he and Brooks Donnelly found a good connection, but almost too late in the season.

This year, finding that target early in the season and often throughout the season will be the only unknown for the offense. More importantly, the Lions desperately need one on each side and one in the slot that can make plays.

Senior Nic Dicen will be the top returner with Donnelly’s 537 yards and six touchdowns now gone. Dicen needs to have a big season and can do multiple things on offense due to his speed and shiftiness.

Joining him will be Mathis Tindall, Ethan Anderson, Jay Butler and Luke Gilbert. All are seniors, who have good footwork and will have opportunities to become a standout player for the offense.

Reebals, however, will not only be key as the lead running back with his 1,149 yards returning, but he also added 499 receiving yards last season as the team’s second-leading receiver.

Expect him to continue making similar plays both running the football and in the passing game as the team’s top athlete.

Regardless of what happens with the passing game, the offensive line will make the offense dangerous as it always does.

Normally, the Lions churn out a new group of five seniors seemingly every year. This season, however, two starters are back in Alex Moore and Charlie Heidepreim.

Those two will lead the unit and give Briarwood experience it’s not used to, while seniors Rich Connell, James-Michael Tedesco and Andy Foust will all start as well. In addition to that, Harrison Klumer, Jason Best and Andrew McCadams add to a deep unit.

That shows that the Lions are able to adjust to replacing top talent, and that should be the case once again this season.

The strongest unit on that side of the ball will be the defensive line with the return of two three-year starters. Miller Stubblefield and Holden Patterson are both senior leaders who should highlight the entire defense this season. They’ll be joined by another senior in Clay Dorrill, who is 6-foot-4, 204 pounds with plenty of athleticism.

Preston King and Garrett Harman will also help fill key spots on the line, which will help make it the deepest unit on the defense.

Behind them, the linebackers will take the biggest blow.

They’ll lose 273 combined tackles from last year’s team leader Tyler Waugh as well as Parker Hutson. Throw in Alastair Harris, who played at linebacker and in the secondary, and you collectively lose more than 300 tackles.

Grant Bruce and Haddon Stubbs are two leaders looking to fill that giant hole, and the two are doing a great job leading into the fall with Stubbs returning 78 tackles.

Hardy Thompson, Knox Merry and Riley Margene can also lend a hand, and if those three come along, the unit may end up becoming a two-deep unit that is as feared as ever.

In the secondary, not only will the Lions lose Harris, but Cal Higdon also departs.

Reece Garner and Seth Alford will return as starters to the position as a cornerback and safety, respectively. In addition to those two, Nicholas Frost will handle a cornerback position and has been one of the hardest-working players in the offseason, while Brady Waugh and Grant Dickinson will add depth.

Prediction (8-2): The schedule isn’t easy by any stretch of the imagination this season, but Briarwood is too talented not to flirt with the 7-10 win range this season. The big key will be replacing defensive talent, which never seems to be too big of an issue, and a receiver stepping up, which is possibly the most important aspect if the Lions want to make it to a state championship. The offense should easily put together its best season since 2017 when Michael Hiers led them to the state championship game, while the defense likely won’t give up more than 20 points per game. Briarwood finished runner-up to Briarwood in the region last year, but this season, the Lions look to be the favorite to win it. It all boils down to the unknowns proving themselves, and the returning talent playing even better this season.