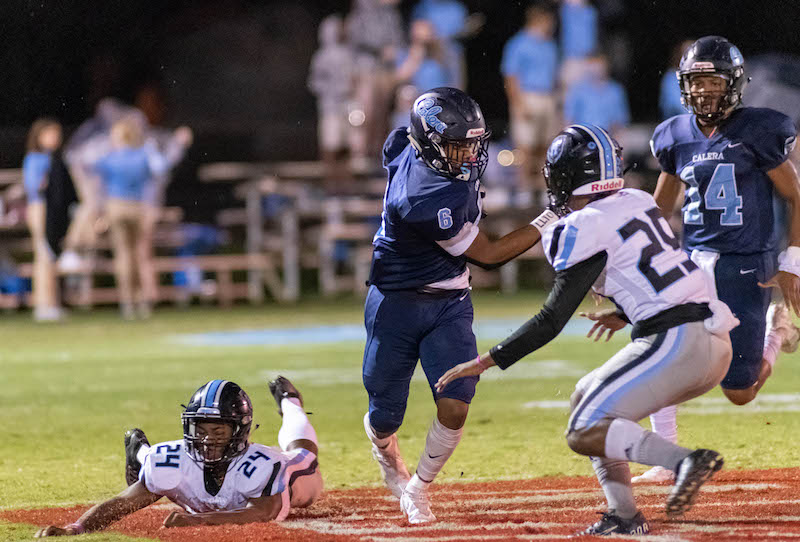 Calera’s Chris Cotton, above, will be one of many exciting offensive players back this year, as the Eagles will look for their best season in the 6A classification under first-year head coach Jason Hamlin. (File)

For the third time in five seasons, the Calera Eagles will have different face leading the program during the upcoming 2021 season thanks to the hire of Jason Hamlin this summer.

But the Eagles aren’t letting the change deter their confidence, as the former assistant at Thompson, Spain Park and McAdory has hit the ground running with an athletic team.

And there is plenty of reason for optimism coming off a 2020 season that was the team’s best since joining the 6A classification.

The Eagles finished 3-7 last season with four of the seven losses coming by eight points or less.

It showed just how close Calera was to finally getting over the hump in the 6A classification, albeit two of those wins were via forfeit.

If they can flip those numbers this year, they’ll be right in the hunt in a difficult Class 6A, Region 3.

Depth and new faces will remain a concern, however, with Calera still adjusting to the numbers needed for 6A competition.

The quarterback position will be one of those spots that needs someone to step up.

With two-year starter Tyler Nelson now at Gardendale, the Eagles are in the midst of a three-way battle between Zymeer Jemison, Jacob Sommers and Preston Stokes.

Jemison is an athletic junior who is developing a passing game but can run the ball extremely well, while Sommers, a senior, and Stokes, a junior, both throw the ball well.

Whoever wins the job will make or break the offense, with Hamlin putting an emphasis on the team being able to trust the quarterback.

They will get the benefit of Alabama commit Kobe Prentice, who has exploded as the state’s top receiver in the offseason.

Prentice totaled 711 yards and nine touchdowns on 41 receptions last year and is one of the state’s fastest players, meaning he can create separation and open up different plays for the offense.

Braylen Farrington and Justin Green will also help out wide, while Sommers and Matthew Windham could get time at a position that will be key to helping a new quarterback gain confidence.

The highlight of the offense, aside from Prentice’s speed, will be the return of two running backs.

Senior Chris Cotton and junior Daniel Carmona may enter the season as two of the most underrated running backs in the county. Each has experience with Cotton being a patient but shifty runner and Carmona a patient downhill runner.

The success of the offense, however, will be determined by the offensive line.

There is still a lot of unknown surrounding that position, but with all of the athleticism on the offensive side of the ball, time to get the ball in their hands will be key.

Tre Bright and Brodie Odom will lead the position, while Matthew Tucker is expected to return from an injury. Beyond that, however, Hamlin and the coaching staff are just starting to get a look at the players in pads to make adjustments where needed.

The same can be said for the defensive line.

Will Sims and his 21 tackles for loss have departed, which leaves a big hole to fill.

The Eagles will rely heavily on Jaylon Pearson, while Julian Marsh and Soleman Moore will also look to make a name for themselves. Due to injuries, however, there is a lack of experience and depth at the position going into the season.

Backing up that group, however, will be a strong unit of linebackers.

CJ Richardson will return 73 tackles, 17 tackles for loss and three sacks to an inside linebacker position, while Skyler Strawn and Dekendrick Bennett will also bring back some experience. The position also features depth with Michael Bankes, Grayton Carlee and Mason Green all earning valuable minutes.

But it’s the secondary that should make a difference. Andre Green and Wesley Head are both returning as the quarterbacks of the defense this season at safety.

Those two are the leaders of the defense, while Michael Benson, DeCarlo Pryor and Braxton Harden are all great in coverage and will lock down cornerback positions.

Prediction (3-7): For a team that has won a combined three head-to-head games the previous three years to win three in one season under a first-year head coach is a big leap. The Eagles, however, have been close to breaking out, and they’ll have the athleticism at key positions to make this that year if the right aspects of the team grow early. The schedule won’t do them any favors, but it will also present opportunities should growth occur. The keys to that happening, however, will be a quarterback forming and both the offensive and defensive line finding any sort of depth. Those three pieces to the team will make or break Calera in 2021. If a quarterback and offensive line can form with the talent at receiver, the Eagles’ offense may end up becoming one of the best in the county, and the wins would follow.