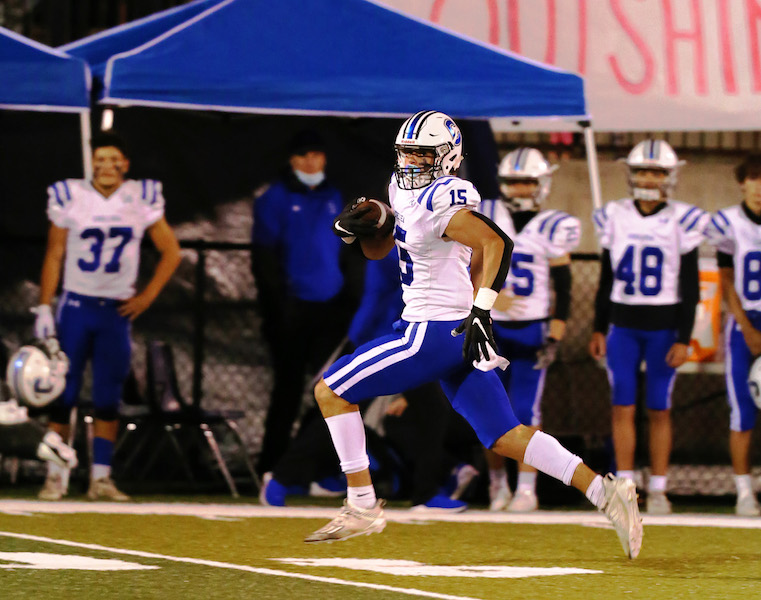 Chelsea’s Thomas Simpson will be a key returnee to the Hornets’ offense this season, as he hopes to form a connection with quarterback Hayden Garrison to help the team make a playoff push. (File)

Head coach Dustin Goodwin is as excited as ever heading into his fourth year leading the Chelsea Hornets.

And he has plenty of reason to be after the way last season ended.

Following a 1-4 start in 2020, Chelsea went on to finish 3-2 over the final five games with the offense completely shifting gears into what Goodwin has been trying to build.

A big reason for that shift in success was Hayden Garrison stepping in at quarterback.

Garrison helped the Hornets post 28 points in his first start, which was a huge boost for an offense that scored three or less in three of the first four games.

Now, for the first time in his tenure, Goodwin will get the return of a quarterback with Garrison back for his junior season.

That experience should be a boost in Goodwin’s offense and will be paired with the perfect role players around him, especially at receiver.

With the return of Thomas Simpson, a 6-foot-3, 205-pound senior, Garrison will have a go-to target this season, which the Hornets struggled to find last year.

Simpson has made a splash this offseason at several camps, while he also returns as a starter who can catch the ball in traffic or down field.

He will be joined by a deep unit, including returning starter Cooper Griffin, who has played all over the offense and will hold a tight end position this year.

Griffin knows the system as good as anyone, which should help he and Garrison be on the same page. JyDarian McKinney, EJ Hudnall and MJ Conrad will also add three others the coaches are hoping will step up.

Other positions on offense, however, will be the determining factor.

The Hornets will lose four-year starter Collier Blair at running back, who was one of the team’s leader with his work ethic and ability.

That won’t be an easy task by any means, but Matt Gray will give it a shot.

A 5-foot-9, 170-pound running back, Gray is shifty and had a great spring. Now, coaches say he is ready to take on the role as the lead back. Sophomore Emerson Russell is also an exciting playmaker that should add a second threat at the position.

Both will have to step up, but they’ll have to do it behind a slightly inexperienced offensive line.

The positive up front will be the return of starters Ethan Vickers and Will Fant. That’s already more returning talent than the Hornets had last year at the position, but beyond that is a lot of unknown.

Finding three others to make a name for themselves could ultimately determine how successful the Hornets can be this season.

With so much talent at receiver and quarterback, and running backs looking to emerge, the line will be the key link.

Defensively, however, Chelsea will be stacked up front with the return of senior Garyson Maddox and junior Emmanuel Waller.

Maddox adds years of experience, while Waller earned a Mississippi State offer in the offseason due to his presence at camps. Both stand around 6-foot-3, 240 pounds and will anchor the position. Joining them will be Kaleb Thomason and edge rusher Marquis Turner, who will also play at linebacker.

Turner holds a size of 6-foot, 215 pounds and is a returning starter to the defense. He and fellow returning starter Brady Clements will be tasked with replacing Donavan Bivins, who was the team’s second-leading tackler last year.

Cody Fortenberry and Kyler Simmons are also expected to be starters, while Jax McLaughlin and Jack Bailey will add depth to the linebacker position.

The secondary will take the biggest for the Hornets with leading-tackler Chandler Pruitt gone. He totaled 122 tackles last season, while Chelsea will also lose Carson Freeman, Chad Carbonie and Hasani Lyons as starters.

Despite those losses, the Hornets will get back familiar faces thanks to seniors Evan Jones, Cade Turner and Evan Durham expected to step up. That won’t completely fill the void, as others will need to emerge, but it’s a start.

Prediction (4-6): The return of a starting quarterback for the first time in four years is exciting for the Hornets, but the schedule is brutal. There may only be one game on the schedule that Chelsea hands down can win going into the season. The rest of the games, the Hornets will be equally as talented as or the opponent will have more preseason talent. The key to overcoming that and becoming the more talented team and finishing .500 or better will largely depend on what happens at running back and on the offensive line. The defense should return enough talent to be at or better than the 27 points per game it gave up last year, while the offense should be drastically improved from the 21.8 points per game it scored. If the offensive line comes ready to play early, and the Hornets can improve their offensive output in the first four games, then they could finish above .500. Going into the season, however, that unknown is the only caution.