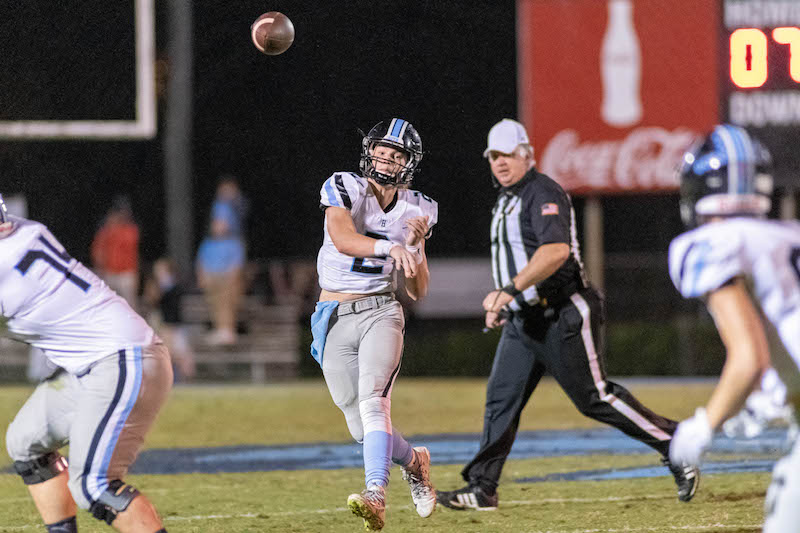 Helena quarterback Mac Turner is primed to lead the Huskies to another successful season this year, as the Huskies look to reclaim the region championship. (File)

After going 4-20 between 2016 and midway through the 2018 season, Richie Busby stepped in and has turned Helena into a championship-contending team.

Now, the Huskies enter the 2021 season hungry after COVID-19 hit their season harder than most teams last year.

Helena started the season 2-2 with two losses by six points or less before then being forced to forfeit back-to-back games due to the virus before then picking up a forfeit win against Chilton County.

That put the Huskies off the field three weeks in a row, but what hurt most was the forfeit to rival Pelham, who went on to win the region title.

Helena bounced back with three consecutive head-to-head wins to end the regular season, which gave the Huskies a runner-up finish in the region before then advancing to the second round of the playoffs.

The team, however, felt like a lot was left on the table, and this year’s group is ready to take the team to the next level after improving seemingly every year under Busby.

Helena will be replacing 15 players going into the season, but several key players will return on both sides of the ball for a team that gave up just 18.4 points per game last year and scored 24.

Offensively, the Huskies will place an emphasis on faster starts this season, as they look to replace the team’s top running backs.

Senior quarterback Mac Turner will return to lead the offense with one year as a starter under his belt. His passing ability has improved due to both experience and a full offseason to prepare as the starter, which was robbed from him last year.

His return should be key for the offense because of what it does to the passing game with 6-foot-6, 220-pound tight end J.C. Sivley returning as well.

Sivley can be big in both the passing game and blocking for the offense as a mismatch for most teams.

In addition to him, Ryne Berry, Miles Mitchell, Hunter Hale and Kasyn Bustamento will all return valuable minutes as players who add another option for Turner to get the ball to.

Finding two targets to spread the ball to at the least will be extremely important, as the passing game will have to possibly pave the way early in the season.

The reason for that is the departure of both Kobe Hughes and Marquis Johnson, who both graduated after splitting starts the last two seasons.

The duo combined for close to 3,000 yards of offense between last year and the year before, which leaves a big hole to fill.

However, Busby’s offense revolves around using a power run game and wearing down defenses to help for late-game success.

Kellen Hughes and AJ Horstead will be two juniors ready to handle that role, while Jordan Washington is also primed to make a splash as a sophomore.

They may be inexperienced, but Busby and the coaching staff have churned out solid run games, and it’s hard to see that dissipating this year.

The offensive line, however, will be what determines the success of this year’s offense.

With the loss of All-State lineman Seaburn Hines and two other starters, the Huskies have big holes to fill at the position.

Trace Barnett and Reese Mims are the two leaders at the position who will return starting experience, but others are still battling.

That gap of needing three more to fill a void on the offensive line may be the biggest hole on the team ahead of the season, showing what might be possible if they do find the right pieces.

Defensively, the Huskies have put together one of the strongest groups in recent years and are coming off a season in which they gave up 19 or less in six of nine games.

Each position on the defensive side will return talent, but it is the front seven that is particularly exciting.

Up front, Helena will lose Brock Sisson’s 79 tackles and 20 tackles for loss, but the return of 6-foot-4, 220-pound senior Joel Logan will make up for that.

Logan will handle one end of the line, while Connor Pugh will also return as a starter.

Under busby and defensive coordinator Jim Elgin, linebackers have been strong each season, and that will be no different this year.

Both Iceberk Cave and Joseph Roberto are back after leading the team in tackles last season.

Those two are expected to be leaders at the position, while Justin Yunke, Peyton Woodall and Nathan Thomason will add depth.

The secondary will be the least experience unit on the defensive side, but the return of Bustamento and Kyle Tolbert will help, while Jackson Snyder also has some playing time to his name.

Despite inexperience, the unit will be deep with Hunter Hale, Fletcher Taylor, Desmond James and Eli Ray expected to get work.

Prediction (7-3): Helena will enter this season determined to get back to the top of the region after finishing second last year. In order to do that, the Huskies will have to get off to a better start. Another 2-4 start can’t happen, especially if the Huskies control their own fate, which they didn’t last year. One of the biggest reasons that is key is because of what lies ahead in the second half. The majority of the team’s difficult games are in the early portion of the schedule, while the second half should feature another strong chance at closing the season with four wins in a row. And knowing how Busby has coached this team the past few years, it’s difficult to see them getting blown out on any night. Their style of play suits a tightly-contested game, and that likely won’t change this season. That said, Helena has been a second half team under Busby, but getting off to faster starts will be key. The defense is so talented that if the offense can convert on opportunities early in the game and build a lead, it will be difficult to see the defense relinquishing it. The pieces are there to make this team a postseason group, but a region title and a deep postseason run will likely depend on depth and players stepping up on the offensive line.