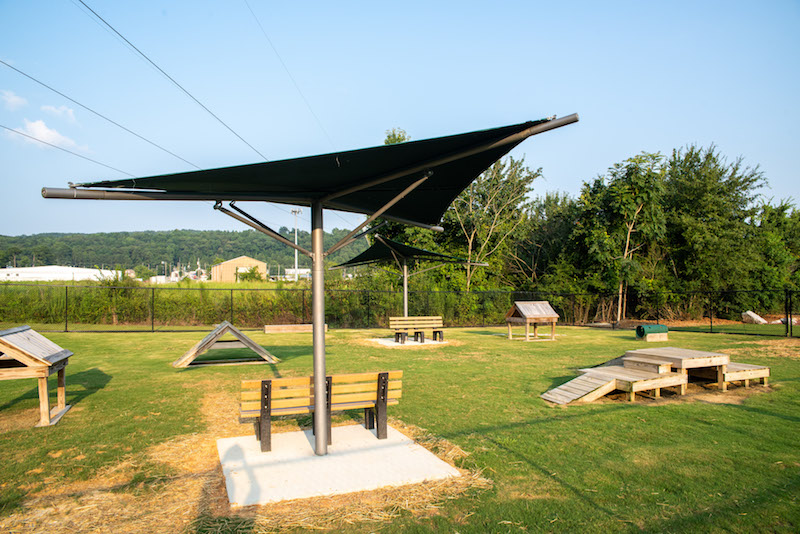 The Pelham Barks and Recreation Dog Park has been undergoing renovations to add eight new shade sails to the facility. (Reporter Photo/Keith McCoy)

PELHAM – Over the past few weeks, the Pelham Barks and Recreation Dog Park has been undergoing renovations to hopefully make it a little cooler for guests.

Pelham Parks and Recreation Director D. Tyrell McGirt called the project a major improvement, which when completed will add shade sails so guests can get out of the sun while visiting.

The project was approved by the Pelham City Council during its April 5, which marked a huge investment in one of the city’s facilities.

“This is a nearly $58,000 investment for one of our most popular park spaces,” McGirt said. “We are eager to see this project completed and thank the city council for approving the necessary funding.”

During the Council’s meeting in April, McGirt explained the desire for these sails came after feedback from guests who had been at the park.

“This is just to add some shade over at the dog park,” McGirt said. “We have had a number of incidents and heard from citizens about the lack of shade in that area. It is a popular space in Pelham. People love that Pelham has a dog park, people love the location of the dog park, but the one thing they don’t like is a lack of shade. For people utilizing that space, it doesn’t create a good customer experience when they are out there using it during certain times of the year.”

The project began on July 13 and is expected to be completed by Aug. 11. A post on the Parks and Rec Facebook page said guests could start bringing their four-legged friends back on Aug. 12.

Since the dog park opened in 2018, it has become a staple for dog lovers from Pelham and its neighboring communities to bring their dogs to for a relaxing day. McGirt said this project would help add to that allure.

More information about the project can be found on the Pelham Parks and Recreation Facebook page.