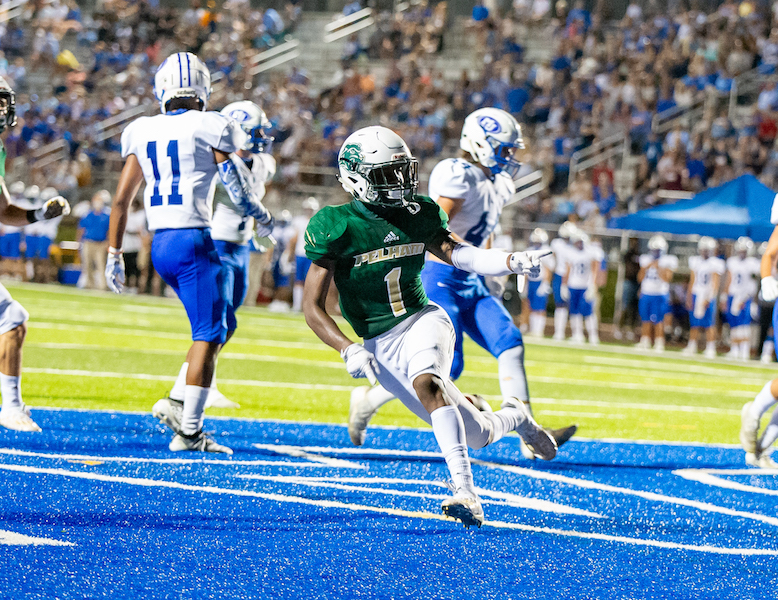 Pelham’s Darius Copeland is one of many back on this year’s offense ready to make a splash for a team hoping to battle for a Class 6A State Championship. (File)

It doesn’t get much better than winning a region championship for just the third time in school history, but don’t tell that to the Pelham Panthers.

Entering the 2021 football season fresh off a region title in 2020, the Panthers are hungry for more, and they may be one of the most underrated teams in the state because of it.

Pelham put together one of its best regular seasons in school history last year with an 8-2 record that saw the team win its first region championship since 2007 and third in school history, but the sweet season ended with a sour taste.

After a 7-1 start to lock up the region title, the Panthers fell by two points to rival Homewood in the final week of the regular season before then losing in the opening round of the playoffs to Lee-Montgomery by two points.

The Panthers felt like they left a lot on the table in both games. Now, they’ll enter this season motivated to redeem that ending, and there may not be a more capable group of doing so.

Trying his best to build the program each year at Pelham, head coach Tom Causey enters his seventh year leading the Panthers, and this might be his most talented group.

That’s a dangerous combination for opponents, with Causey proving what he is capable of with returning talent in the past.

The majority of talent on both sides will return this season, which means there should be improvements in both of those categories. That is something that can make a difference in close games this season after all three losses last year came by seven points or less.

Offensively, the Panthers will return all but a handful of starters.

The 6-foot-3, 185-pound quarterback has seen his confidence grow in the offseason due to experience and more preparation entering this season.

What makes him even more dangerous is the return of three receivers, who all left their mark on last season.

Jake Fox, Darius Copeland and Christian Pritchett have all been a part of the offense for two years and will now return as top targets. Each is extremely fast, has good hands and can create separation through route-running or after the catch.

The Panthers also have depth at the position, which makes it one of the team’s strongest position unites.

Those returnees will help soften the blow of losing Dylan Peterson’s 1,305 yards and 15 touchdowns at the running back position, but the scary aspect is starting running back Gabe Gamble will return.

Gamble went over 1,000 yards as the lead guy with Peterson out two years ago, while he still started several games last year and totaled 625 yards and seven touchdowns.

Back to being the focal point of the run game, Gamble is expected to produce at his best mark yet during his senior season, especially with defenses now having to respect multiple aspects of Pelham’s offense.

With all of that talent across the offense, the return of three offensive linemen takes the excitement to a new level.

The Panthers will lose starters Chris Quintana and Jesus Luan, but Caleb Newell, BJ Maxena and Jackson Davenport are all back at the position.

Newell and Maxena have been on the field for multiple seasons as starters, while Davenport will return to a different portion of the line this season.

Despite the loss of two starters, the line also may be deeper this season with Brody Layton, Tyler Mason, Gabe Schmucker, Brian Terry, Corbin Sanders, Cash Tatum and Mikey Ramos all set to start or provide depth.

For the coaching staff to have that much confidence in that many players, the offensive line should be a strong suit all season, which makes it difficult to see this year’s offense struggling.

The returning talent carries over to a defense that gave up 23 or less in the last five games a season ago and 28 or less in all but one game.

Behind that group is probably the most exciting unit on the team along with the three returning receivers.

It is easily one of the two best collective groups of linebackers in the county with all having at least one year of starting behind them.

Behind that, Isaiah Byrd, Tony Mancuso, Brodie Martin, Johnny Pena, Bishop Rellah and Will Felton will all add depth to make the Panthers two-deep at the position.

Closing out the defense will be another experienced group in the secondary.

Three starters will return looking to play lockdown defense in coverage with cornerback Jamal Miles and safety Fabian Caderon leading the way. Both have started for two years, while Jylen Tate is back as a starting corner.

Prediction (8-2): Clearly, the potential is there for Pelham to be as good as Pelham wants to be this year. It’s the most experienced team the Panthers have had in years, and should be even better than last year’s region championship team. However, they will have to keep the mindset of proving to other teams that they aren’t a fluke. They can’t enter the season thinking they’ve made it, because it’s still a team that lost its last two games by two points last year and was one-and-done in the postseason. This year’s team should be confident, but almost in a determined way, not a cocky way. Looking at their capability on paper, it should be a year the Panthers compete for a deep playoff run in the 6A classification, and they shouldn’t be happy with anything else. You’ve got three returning starters at every group unit, a returning starter at running back and a returning starter at quarterback. It doesn’t get any better than that. Now, it’s time to capitalize.