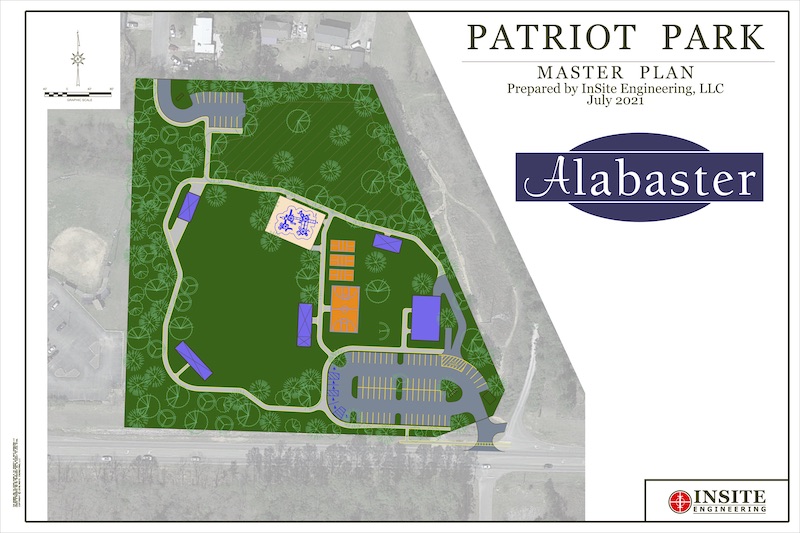 The above plans show the layout of the upcoming Patriot Park, which will be located on property purchased from Kingwood Church. (Contributed)

ALABASTER —  A new park is currently under development in the city of Alabaster and is expected to debut sometime in the near future.

The park, officially named “Patriot Park” is being built in honor of the city’s first responders, according to Brian Binzer, the city planner and administrator for Alabaster.

“We wanted to name the park as a homage to our first responders, including our firefighters, EMS and police. They’re important to our community, and we just felt like we needed a park named after them,” Binzer said.

Development plans for the park began in 2019, following a park-needs assessment with city residents.

“A new park was one of the things that scored really high with residents. We found in the study that it was particularly hard for a lot of folks that live in the northern area of town to get to the other parks in the city, and that some of them were even utilizing other cities’ parks because they were just geographically closer,” Binzer said.

In response to growing demand, the city set out to find a suitable location for a new park last year, and eventually purchased an 8-acre property from Kingwood Church.

According to Binzer, the nearly 5,000 square feet of land had been formerly designated as the church’s high school,  but since 2018 had dissolved into a vacant property. Last year, the church listed the land for sale at which time the city requested to buy the property.

“It had become an excess property for the church and they really didn’t have any need for it, and we’re always looking for opportunities to expand the quality of life of our citizens, and this was just a great opportunity that we couldn’t pass up,” he said. “So we are hopeful this is something that could really be expanded for the whole of Alabaster.”

The land had already previously hosted the school’s football and baseball games, which made the property ideal for a recreational park, Binzer said. Over the past year, the city has utilized the property as an open-green space, but several months ago began planning official construction designs for the park.

On July 26, the Alabaster City Council approved an $85,000 agreement with Insite Engineering, LLC to develop a final design proposal for the park. Over the next three months, the company will create a detailed design plan for the new park, which will include structural and architectural layouts as well as building costs and a construction timeline.

“We previously hired Insite Engineering to come up with different concepts, and they presented those to the Parks Committee, which consists of three different council members. From that, we will come up with this final design,” Binzer said.

According to Binzer, much of the upcoming park’s architecture is based largely on residential surveys last year. Among the community’s highest priorities, residents specifically requested additional walking trails and playgrounds.

“People are wanting to be more active, especially coming out of the pandemic and they’re looking for outdoor opportunities. There are also a lot of young families in the area with children, but there’s no playground that’s within the immediate vicinity,” Binzer said. “So, I think this will be a big hit with those families as they’ve been looking for that kind of opportunity for some time.

Other park amenities will include several pavilions and pickleball courts, which Binzer said is becoming a popular sport in the city currently. According to the city’s master plan, a basketball court is also planned to be built in the park’s center.

In addition to providing more recreational opportunities for residents, Binzer said the park would also serve as an overall quality life improvement for the Alabaster community, and overtime hopefully encourage other positive effects such economic developments and new businesses.

“This project fills a need that we’ve had in the north part of town for a while, but I’m also hopeful that as we do more of these kinds of things, we’ll also start seeing more jobs and retail come out of the ground as well so that people will want to continue to move here and I think this is just one piece of that puzzle to make this happen,” Binzer said.

The City Council is expected to likely approve a final design plan for Patriot Park sometime this fall.