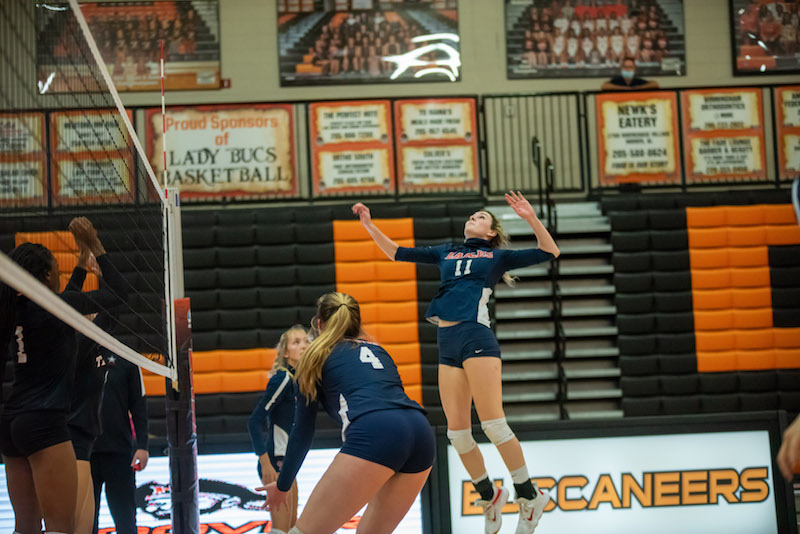 Oak Mountain’s Jayni Thompson, above, will be one of the leaders on this year’s team hoping to take the Eagles back to the playoffs. (File)

Volleyball life in Class 7A isn’t easy. Playing in Area 5 is about as far from easy as it gets. Nevertheless, that’s the task at hand for Oak Mountain and second-year head coach Grace Burgess.

Competing in an area featuring defending state champion Hoover and local rival Thompson, who made the Final Four, the Eagles must clear both of those hurdles to make the postseason.

Burgess put together a solid first year at Oak Mountain thanks to players like All-County selections Landry Frisch, Sydney Jaffe and Lacee Sheaffer, who made up a special senior class. That, however, doesn’t take away from a special group returning.

“Last year’s senior class will definitely be hard to replace. They were great athletes and outstanding young women,” Burgess said. “This year’s seniors stepped up immediately and started leading in the offseason. Two of our rising seniors, Emily Cox and Kathryn Smith, were chosen by the athletes within the program to be our offseason captains. They learned how to not only work their hardest but how to hold others accountable for their best as well.”

Smith and Jayni Thompson are Oak Mountain’s returnees fresh off All-County performances in 2020. Each will be counted on heavily to set the example on and off the court.

“Jayni and Kathryn are outstanding athletes. Both played on high-level club teams, had top notch club coaches and committed to their development in the offseason,” Burgess said. “We implemented a strength and conditioning program, which helped the girls athletically regarding lateral speed and increased verticals. Their dedication to their volleyball technique and training really shows now. They are willing to put this team on their back because of the love they have for their teammates.”

Burgess may be even more impressed with how her leaders conduct themselves away from competition.

“Off the court, Jayni is a genuine example of authenticity. For high school girls, that is a hard thing to do and she inspires me to be more authentic every day,” Burgess said. “Kathryn is unapologetically dedicated to her faith and showing God’s love through her actions. They are both wonderful athletes, young women and role models who will be extremely fun to watch.”

After having as close to a normal offseason as they’ve had in a couple of years, Burgess believes the best thing her student-athletes can do now is get back on the court.

“We had team camps this summer, which I think is the biggest thing for these girls,” she said. “That is where I have seen the most improvement. Going to camp, learning strengths and weaknesses, and getting back into our gym to work on those things. Now, I think they’re just ready to play.”

Taking on the massive challenge that is Area 5, Burgess said she knows games will come down to the slimmest of margins where mental errors can determine a close win or loss. Ultimately, team chemistry is what can tie it all together.

“We have to execute at a very high level. We have to trust our system and stay focused on our growth throughout the season. This team, they know they have to stay connected to each other,” Burgess said. “We have to stay dedicated to our core values in effort, discipline, gratitude and growth. If we do those things consistently, our area will have some great matches this year.”

Those core principles, if implemented correctly, will build a program that stands the test of time. Burgess has seen it at her previous career stops in year two at Spain Park and Thompson and  wants to see those values take shape for her Eagles.

“When people see Oak Mountain, I want them to say, ‘They work so hard, they are disciplined, they are grateful and kind, and they get better every time I see them,’” Burgess said. “That’s in the classroom, in the weight room, on the volleyball court and in life.”