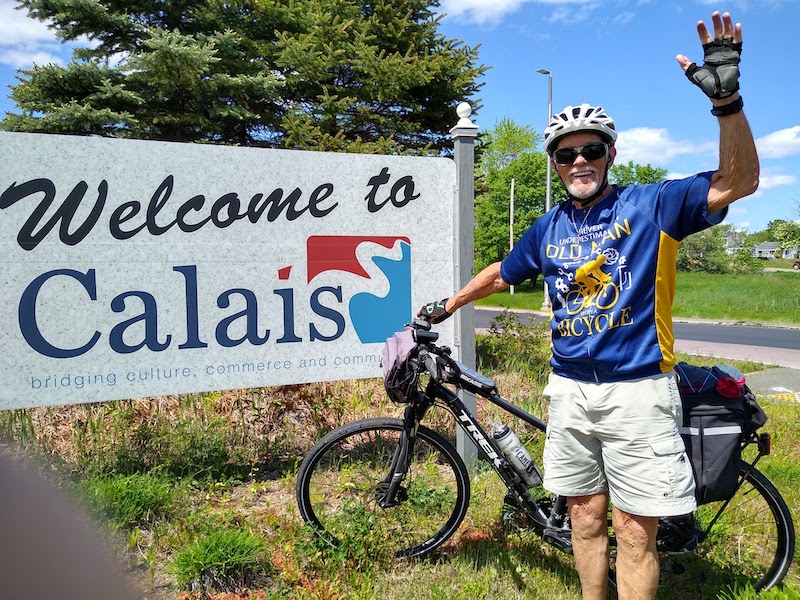 George Dudley of Columbiana left Key West, Florida on bicycle on March 26 and arrived in Calais, Maine on May 27 to raise $20,000 for St Jude’s hospital. (Contributed)

Since 2019, George Dudley has been planning and training for a bicycle ride from Key West, Florida to Calais, Maine to celebrate making it to age 80.

Dudley has always been active, especially when it comes to hiking. But when his body couldn’t handle hiking anymore, he turned to cycling which was easier on his joints. Cycling gave George the opportunity to go farther and faster than he could hiking, and ever since he started, he’s done just that.

He started out with a fellow cyclist taking long rides that would go as far as 250 miles and last several days. His faithful and encouraging wife of 63 years, would follow and set up camps to stay in overnight along the way. These trips motivated Dudley to dream bigger, so as his 80th birthday approached, he made plans to bike from Florida to Maine and to use the trip to raise funds and awareness for St. Jude’s hospital.

With plans set and the backing of countless family and friends, George and Judy were all set to take off from Florida in March of 2020. Best laid plans, however, were interrupted when just weeks before embarking on their journey, problems emerged in Judy’s lungs that required a lobectomy of one section her lung.

This scare was soon a perspective flipped when the entire country shut down the day George would have pedaled off from Key West.

The two setbacks never discouraged the Dudleys. Steadfast patience and perseverance allowed Judy to heal during this time, while George continued to train trusting that one day he’d make the trip.

And finally, in March 2021, they did just that. Fully vaccinated and in great health, they took off from Key West on March 26 for the adventure of a lifetime, and they managed to raise $20,000 for St. Jude’s along the way.

Many of the donations the Dudleys received for the charity came in during their initial preparation for the 2020 trip, but the delay did not impair their goal. Along the way, the couple met countless people who struck up conversations thanks to the Cycling for the Son branding they put on T-shirts and Judy’s car. People who often donated not only to St. Jude’s once they heard their story, but also contributed to the expenses they had on the road. They donated so much to expenses in fact, that the Dudleys were able to put $6,500 into the pool for St. Jude’s, that they didn’t need on the road.

After months of cycling, staying with friends new and old, meeting new people that would become new close friends, and countless moments that George calls “God moments,” George made it to Calais on May 27.  He’d pedaled 2,749 miles and Judy, as road support, dropping him off and picking him up each day, as well as setting up daily accommodations, drove approximately 66,000 miles.

George told us one of his biggest takeaways from the trip was, “Never give up.” To find out more details about the Dudley’s trip, look out for the September/October issue of Shelby Living.