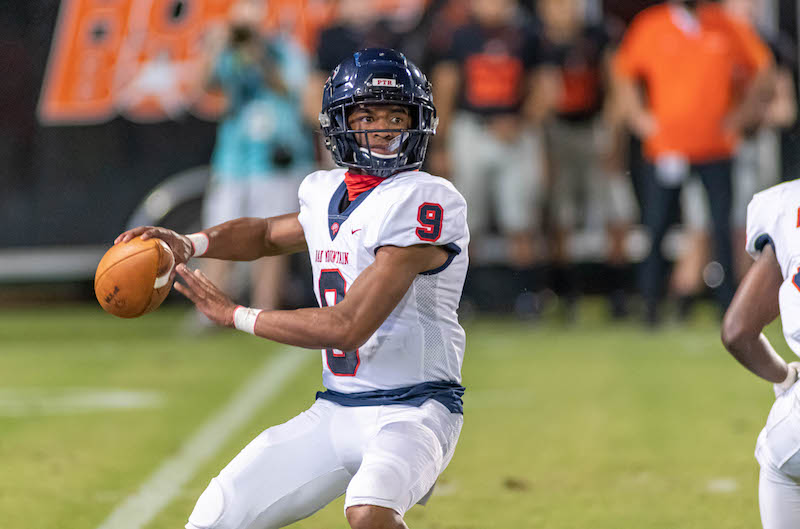 The Oak Mountain Eagles will look to follow up on a historic season last year under first-year head coach Tyler Crane this season. Quarterback Evan Smith, above, will be one of the key pieces in helping the Eagles transition into a new style. (File)

A new era of Oak Mountain football is upon us thanks to offseason changes to the Eagles’ coaching staff.

Veteran coach Cris Bell, who spent nine seasons leading the Eagles, has left to take over the same position at Scottsboro.

Crane will take over as the new head coach after previously serving as an assistant at Oak Mountain several years ago before moving to Northridge and then joining Patrick Nix at Central-Phenix City as an assistant coach last year.

The new head coach will walk into a solid situation at Oak Mountain with the Eagles coming off a 7-5 season and a spot in the second round of the playoffs.

Last year, Oak Mountain started the season 4-0 for the first time in school history and eventually jumped out to a 6-1 record through the first seven games.

The Eagles lost three in a row to end the regular season, but then bounced back with a 41-28 upset win against Austin in the opening round of the playoffs before falling 24-21 in a controversial quarterfinal loss to Hoover.

Going into year one under Crane, Oak Mountain is looking to build off of last year’s success, while also using the heartbreaking ending to their advantage.

One of the biggest question marks on everybody’s mind heading into the season, however, is what style of play will be run.

A triple-option style team during the duration of Bell’s tenure, the Eagles are expected to change that philosophy heading into the season.

Luckily, they have a quarterback primed to lead them through whatever changes come their way.

Evan Smith will return for his senior season with three years of starting experience already under his belt.

Coming off a season in which he led the county in rushing with 1,719 yards and 23 touchdowns and also added 620 yards passing with six touchdowns, Smith is one of the county’s best athletes.

He has totaled close to 5,000 yards of offense in his three seasons, which put’s Oak Mountain in good hands when it comes to a trustworthy player at the most important position.

The biggest blows to the offense will come at running back and receiver.

The Eagles lose Judah Tait, who totaled 1,412 yards and 12 touchdowns last season out of the backfield, while Noah Young will depart as the team’s leading receiver.

Filling in at running back will be Trey Vassell as a physical, thumper type of back. Aiden Laughlin and CJ Branson also add two more physical runners with Laughlin the fastest on the team.

The most exciting player out wide will be the return of speedy athlete Cade George, who can make plays in different ways. The coaches want his game to become more vertical, while he can also take screen passes and sweeps as one of the fastest players on the team.

Ethan Hammett and Peyton Swann are two others starting to emerge at the position, but every receiver is working on the basics of route running and catching the ball due to the position not being utilized as much over the last 10 years.

In addition to the receiver position, there will be some question marks on the offensive line as well.

The Eagles will lose starters Drew Rowland and Chris Mattox up front. However, Nic Rigdon and Mason Burnett are both back as starters for their senior season.

Alfredo Hernandez and Charlie Serra look to be two others ready to fill a role, which gives Oak Mountain four trustworthy players, but there are still key roles that need to be filled.

The defensive line will be slightly unknown entering the season, but it is a position with a lot of upside should the right players emerge.

The Eagles will be forced to replace Jacob Katona and Micai George at the position, but Gavin Nelson is back.

Nelson stands at 6-foot-4, 235 pounds and returns 39 tackles, 7.5 tackles for loss and five sacks. He will be the leader of the group, while Zach Smith and Luke Oswalt have both worked hard to fill big roles. Davis Coggins and Omar Cooks are two others Crane said could have breakout seasons this year.

Completing the front seven will be possibly the strongest unit on the team at linebacker.

Cam Atkinson, Maddox Vines and Garrett Murphy will all return as starters this season after becoming leaders of the defense last year. Crane said he is excited about the possibility of that group, while Jah’ki Mullens is a freshman who could end up separating himself.

In the secondary, the Eagles will lose starters Zach Taylor and Jimmy Harris, who combined for five interceptions last year.

Corbit Grundhoefer and Devin Moss, however, will add two returning starters with athleticism at the position. Omar Cooks and Bobby Laurey should also step into key positions this year to help solidify the defense.

Prediction (6-4): Last year, it couldn’t have started any better for the Oak Mountain Eagles with a 6-1 mark through the first seven games. This year, a couple of those teams will be improved, but the two toughest matchups will be Hoover and Pelham. The Eagles could even have chances to win those two, which would put them in as good of a situation or better this season. That said, this year is this year. Not only does Oak Mountain have to go out and prove that it can win those same games, but the Eagles will have to do it with a new philosophy under Crane. This season will simply come down to how well Smith handles that transition at quarterback and how well the defense plays. If Smith finds his niche and this offense can reach a new level, the Eagles will be a dangerous threat. A lot of that success, however, will depend on other players catching the ball or blocking in different schemes. The defense should be as talented or more talented than it was a season ago, so if the offense can come close to last year’s 30 points per game, this could be a special year for Oak Mountain.