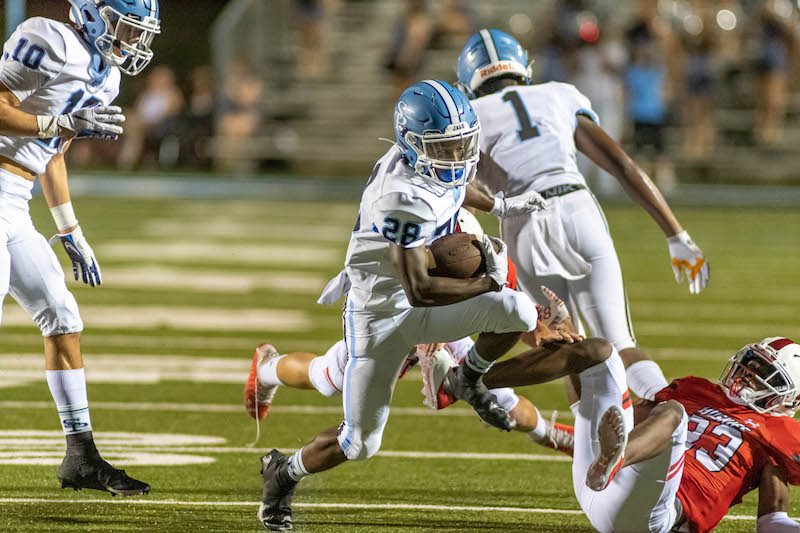 The Spain Park Jaguars will enter the 2021 season hoping to end a three-year playoff drought. (File)

The Spain Park Jaguars enter the 2021 football season searching for their first playoff appearance since 2018, but they’ll have obstacles to overcome to get to their end goal.

A few months ago, things looked promising for the Jaguars, but the loss of several players to transfers has caused the Jags to go back to the drawing board.

That, however, has led to a resurgence and a new style heading into the season.

The positive is that the defense will return the majority of its players from last year, which is the side of the ball that needs to show drastic improvement, while the offense may look different but has the right pieces in place to make any changes necessary.

The Jags are entering year nine under head coach Shawn Raney, who has seen success by leading the team to its first win against Hoover and a state championship game appearance.

Now, however, they are in the midst of their longest playoff drought in school history.

While it’s a positive that number is only three years, the coaching staff and players know it’s time to turn the page and get back to the great football the Jaguars have put together over the years.

The easiest way to get back to where they have previously been will be for the defense to completely shift gears.

On the flip side of that, the offense has shown promise the last two years in a more spread out, air-attack style, but they have been inconsistent and now they are likely changing styles.

With three offensive players transferring to either Hoover or Thompson, the Jags will lose much of the production on that side of the ball.

Due to that, the Jags are going to capitalize on what they do have, which is an athletic run game and a physical offensive line.

Evan Smallwood will come in and take the reins at quarterback for his junior season, and will bring an athletic presence to the position. His speed and improvement with his arm are set to lead more of an option-style of play this season that will be difficult for defenses to prepare for.

Running back Zamir Farris will also help with a new style of offense thanks to his playmaking ability in the backfield. He put on 15-20 pounds of muscle in the offseason and is one of the fastest players on the team, which gives the Jags two quick playmakers to run the football.

With the loss of their top three receivers, Spain Park won’t rely as heavily on throwing the ball this season, but Pierson Cole and Landon Miller add two trustworthy athletes at the position who can both block and catch.

With the shift in style this season, the offense is going to rely heavily on the offensive line for production.

The returnees at the position, however, are what give the Jags confidence.

Back up front will be Conner May, a three-year starter, as well as Jackson Boler, Morgan Bowden and Rashard Burts. Those four should be one of the best lines in the county this year, which will make the run game extremely dangerous should everybody stay healthy and fresh.

With an offense that should eat up more clock this season, the defense should have a chance to thrive once again.

The Jags will return a strong class of players who have all put on close to 15 pounds if not more in the offseason.

Up front, Brian Alston, Caldwell Bussey and Mason Bowden are all back for their junior seasons. Depth still needs to emerge, but those three give the defensive line the potential to be the best it has been in several years.

At linebacker, there will be more depth concern, but starter Ethan Gutowski returns, while Jonas Harrelson also returns plenty of playing time. That should create a solid duo at the position, while others are starting to emerge early in fall practice.

Last year, the secondary was the highlight of the defense, but this year’s unit will feature several new faces.

Tyler Hunter is primed to be the leader at the position, while Alex Smith will join him at cornerback. Jack Kendrick, who is one of the team’s best athletes, will lead the group at safety.

Those three should set a good example for younger players looking to make a name for themselves.

Prediction (4-6): Playing in one of the most difficult regions in the country, there won’t be any time for the Jaguars to ease into the season. They’ll open this season with Huntsville, but then get Class 6A No. 5 Briarwood before matchups with top-five ranked teams Hewitt-Trussville and two-time defending champ Thompson. With so much change entering the season, a lot of this year will depend on how the Jags handle that change early in the season so they don’t start 0-4. If they somehow get through that stretch 2-2, that makes the rest of the games on the schedule more manageable and a battle for the playoffs could ensue. It will all boil down to how much improvement the Jags show on defense after a couple of down years and how well the offense handles change.