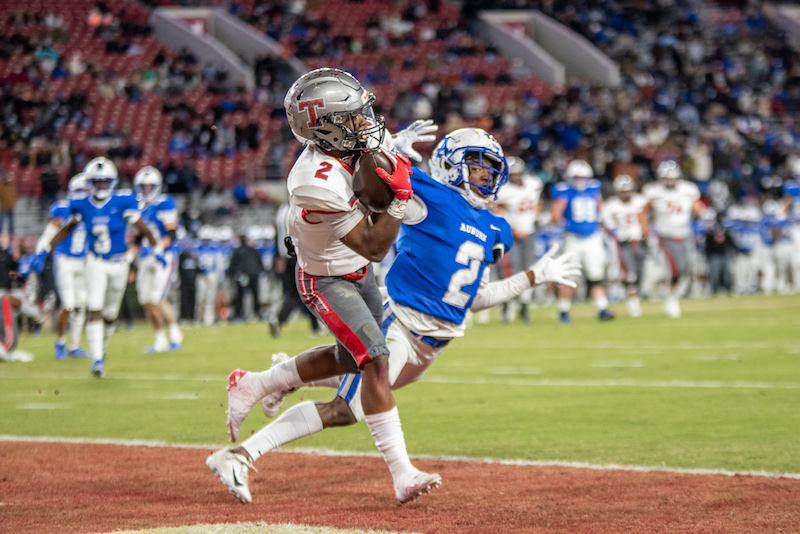 The Thompson Warriors will enter the 2021 football season as favorites to win their third consecutive state championship thanks to a strong cast of returning players. (Reporter photo/Keith McCoy)

Everyone in Bryant-Denny Stadium held their breath as Trevor Hardy lined up a 32-yard field goal with four seconds to play in the 2020 state championship game.

Auburn High School fans waited in anticipation to see if they could hold off a miraculous comeback from the Warriors, while Thompson fans looked to do the unthinkable of overcoming a nine-point deficit with 30 seconds to play.

After a blocked punt led to a touchdown and an onside kick was recovered, Hardy got his chance to win the game after two pass interference calls moved the Warriors into field goal range.

He didn’t disappoint, nailing a low line-drive through the uprights to give Thompson a second consecutive state championship with a 29-28 win against the Tigers.

How do the Thompson Warriors top that miracle in 2021?

The answer is quite simple actually—win a third title in a row.

As winners of two straight 7A titles and with trips to three state championship games, the Warriors enter the season as the No. 1 team and heavy favorites to bring home the state’s most coveted prize yet again.

Despite making it to at least the semifinals for the last four seasons in a row, it’s this team that looks to be the most talented on paper.

In addition to that, they’ll add three key weapons on offense at receiver and running back.

Defensively, however, is where the talent can make your jaw drop.

The Warriors will return most of their talent on that side of the ball with three top-15 recruits nationally, four total in the top 60 and several others ranked in the state.

Coming off a season in which the Warriors averaged 43.1 points per game and gave up 15.9 points per game, it’s hard to imagine them being better, but they could improve on both sides of the ball this season.

Looking at the offense’s 43.1 points per game, this year’s team will return starting quarterback Conner Harrell.

Last year, Harrell was named the Class 7A Back of the Year, to the Super All-State Team and as the Alabama Gatorade Player of the Year for football after totaling more than 3,400 yards and 40 touchdowns.

He will lose starting running back and leading rusher Jarrett Crockett as well as leading receiver J.B. Mitchell, but the North Carolina commit will have just as much or even more talent back this season.

Replacing Crockett at running back will be Brandon Franklin, who holds a frame of 6-foot-2, 218 pounds. Franklin has been around the program the previous two seasons, but was injured last year, which limited his production.

He has had a lot of high praise each year, however, and should be a force for the Warriors this season.

He’ll also be joined by Spain Park transfer Justin Pegues, who can run the ball well and catch out of the backfield. He totaled 570 rushing yards and 426 receiving yards for the Jags last season and will fit in to this offense perfectly.

Out wide, the Warriors will lose Mitchell’s production as well as a combined 900 yards from Sam Reynolds and Tre Roberson, but returning will be one of the county’s fastest players in Ryan Peppins.

Peppins totaled 978 yards and 11 touchdowns last year and will lead the group this year, while Jaylen Ward and David Moultry will join a talented group as transfers.

At Spain Park, both stood out last season, while Ward totaled 876 yards and five touchdowns as the team’s top targets.

Moultry is a lot like Peppins with his speed, while Ward adds another player who can high-point a ball. Ahmari Bolden and Bo Jones are two other extremely athletic playmakers that will force defenses to guard across the entire field no matter who is out there.

All of those players combine for one of the most dangerous offenses in the country, but finding the right tools up front may be the biggest key.

Returning with experience will be Cole Hall and Parker Mitchell, who both got starts last year and bring back good frames to the position. Noah Watts is another player the coaches are confident in, but five others are still battling for a position, which will help fill out the line and add depth.

Now, not only is the front seven loaded, but the back end may be the best in the country.

Up front, Peter Woods and Jeremiah Alexander will play opposite of each other on the end of the line.

The two have combined for 93 tackles for loss in their time at Thompson and are ranked inside the top 10 nationally as recruits.

Those two should lead the unit, which will open up holes in the middle of the defensive line with them garnering much of the attention.

Alexander will also slide back to play linebacker at times, but the return of Jax Van Zandt and Nate Riddle help that not be as necessary.

Van Zandt is going into his third year as a starter and totaled 90 tackles and 9.5 tackles for loss last year, while Riddle returns 89 tackles and eight tackles for loss. That makes four of the players in the front seven some of the best in the state.

But on the back end of the defense may be the scariest unit on the team.

The secondary will feature Tony Mitchell and Tre’quon Fegans, both ranked nationally as recruits. Mitchell is a hard-hitting corner, who can also handle a nickel position because of his ability to tackle.

Fegans, a Miami commit who transferred from Oxford, adds another dimension to the secondary due to his coverage ability.

The two of them will be joined by Hardy, who can play anywhere on the defense he is needed, while A’mon Lane has also gained several Division I offers from schools such as Auburn and Florida State.

Those four are talented enough to hold down the fort, but Jake Ivie and Karston Haywood can add two other trustworthy players for depth.

Prediction (10-0): On paper, Thompson should be even better than last year’s 14-0 state championship team, so how do you not pick them to finish the regular season undefeated this year. Last year, the Warriors won every game by at least 12 points until the 29-28 win in the state championship. And this year, the talent gap from them to other teams may be even larger. However, the Warriors will still face nationally-ranked teams in Hoover and Hewitt-Trussville, while others in the most difficult region in the state won’t make it easy on them. In order to be successful, the offensive line will have to have several players emerge, while depth across the board will be key to keep everyone fresh at the 7A level. It’s also key not to get complacent and remain hungry knowing they’ll get everyone’s best shot. That said, this team is riddled with elite talent and is ranked inside the top five nationally. Until somebody takes it from them, the Warriors are easily your favorite to win this year’s state championship and rightfully so.

Thompson primed for big season with top players back