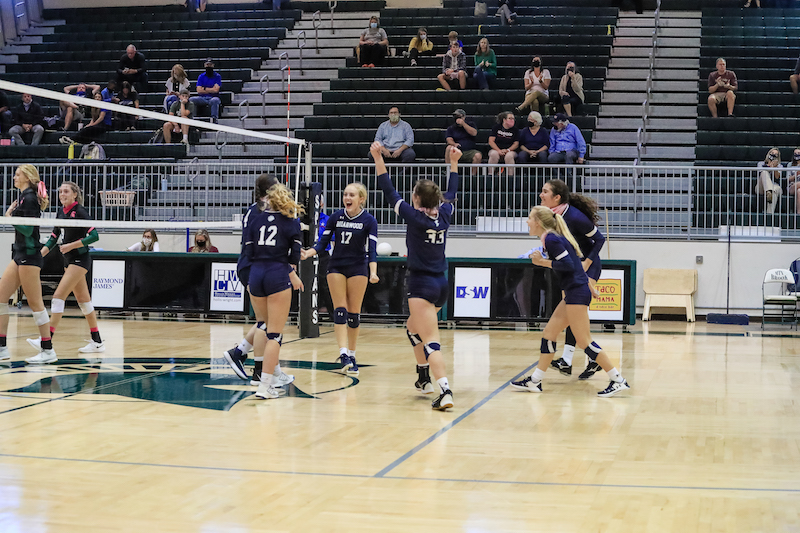 The Briarwood volleyball team will compete in one of the most difficult areas in the state this season, but the Lions remain hopeful under second-year head coach Hannah Josey. (For the Reporter/Dawn Harrison)

The Briarwood Lions showed glimpses of hope during the 2020 volleyball season under first-year head coach Hannah Josey before a difficult area became too much to handle.

Heading into the second season under Josey, however, the Lions are hoping more for just a fast start; they’re hoping to find a way to compete with three of the top four teams in the state.

Competing in an area that features No. 1 Homewood, No. 3 Mountain Brook and No. 4 Chelsea, the Lions will have to finish higher than two of the best teams in the state in order to advance to the postseason this year.

“Being a second year coach this year, I know the ropes a little bit better and know the schools we’ll go up against,” Josey said. “I’m feeling more comfortable. That has been a point of emphasis. Outside of volleyball, see if you perform better and feel more comfortable.”

Last season, the Lions didn’t win a single set in area play, which makes this year’s challenge even more difficult with possibly an even more challenging schedule.

Josey said she is hoping that with the players having a year under her, they’ll be able to handle more this season.

“A quick style of play is what we are going for. We played at an OK level last year,” Josey said. “They’re picking it up really fast. I expect by the time we play our first game, they’ll have everything figured out.”

One of the biggest keys for Briarwood to reach its full potential will be playing together as a team, which several players and the head coach all admitted to.

“This is the second year with coach Hannah. Just knowing her as a coach better is helpful. But we are all a lot closer,” senior outside hitter Mae Shaw said. “We’re very excited. Team chemistry has gotten lot better this year. We’re all excited just to get along and have better attitudes. We just need to believe in ourselves and trust each other.”

Playing collectively is something Josey said will be key to helping the Lions not only start fast but finish strong in area play.

“Playing together as a team, these girls have known each other for a while. The team chemistry and being aware of where each other is on the court and having that chemistry is important,” she said. “I know some of them played on JV last year, and are still learning, but the chemistry they have now is really, really strong. That is the edge that we have this year that we didn’t have last year.”

With four seniors on this year’s team, there are still young players on the roster, but each player has a year of experience learning a new system, which should benefit the Lions in 2021.

Competing in their area will be a tall task, but it’s a team that is heading in the right direction and they’re going in that direction together.