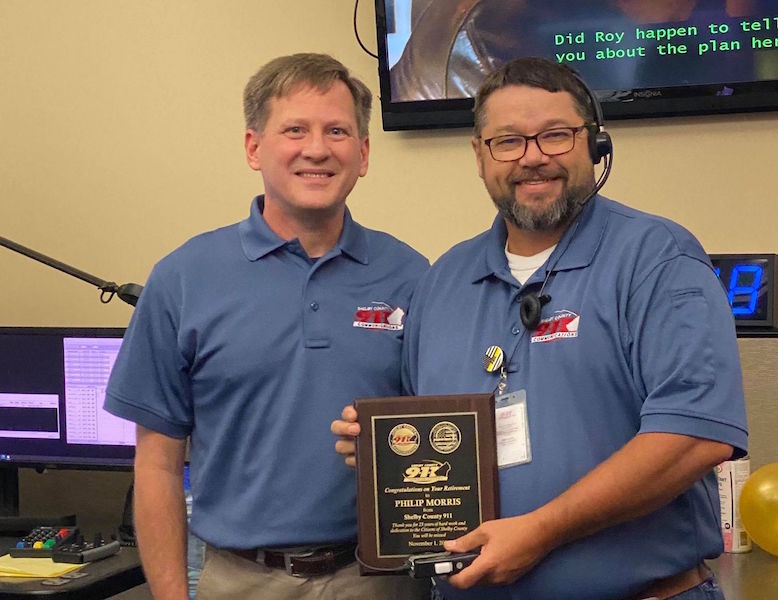 Philip Morris stands with his supervisor and the plaque he received to celebrate his retirement just before having to dispatch a death-in-the-field call to his father’s house. (Contributed)

In the middle of receiving a plaque to commemorate his 23 years of service as a Shelby County 911 dispatcher, Philip Morris got the worst call of his career on Monday, Aug. 9.

After years of handling distressing calls and helping people through traumatic situations, Aug. 9 was supposed to mark a celebratory end to a special career of helping others until the call came.

“My boss is giving me a plaque to celebrate my retirement when a call comes through to my coworker from my father’s house,” Morris said. “That’s when I had to dispatch a call to an unresponsive person. It was a DIF, which means death in the field. My last radio transmission as a 911 dispatcher was ‘88th command reports death in the field,’ and it just happened to be my father.”

In a career that saw him as the first person many talked to when facing the most distressing of situations, it was his final call before hanging up the headset that will be the lasting one.

“In this field, you have to keep a sense of humor about you or it will get you down in a hurry,” Morris said. “My coworkers joked around with me that I couldn’t go out on something simple, it had to be something crazy. It couldn’t just be a stubbed-your-toe call, it had to be the one 20 years from now people will look back on and say, ‘Oh yeah, that guy, he dispatched a call on his father. That’s the last thing he ever did.’”

His father, who was a Vietnam veteran, was disabled because of his time in the Marines, which meant Morris took care of him on many different occasions, but this phone call marked an emotional end to a long journey.

Morris’s  wife and son were also at the office to surprise him for his retirement celebration, but because he and his crew were working through the celebratory moment, they saw him take the difficult call.

“They happened to be standing there and happened to see me doing all of this,” Morris said. “When you are in the moment, you kind of detach from who it is, what it is or where it is to handle it. If you don’t do that, it is difficult to handle the stress.”

But as soon as he hung up the phone, Morris knew he wasn’t OK.

He went straight to his supervisor after dispatching the call and said, “I need to go.”

“I knew I wasn’t going to be OK in that moment,” Morris said. “I called those responding to his house to make sure it was him, which I was 99-percent sure it was. Once they confirmed it, I went straight there to start handling everything.”

It was a trying end to a 23-year career, but when Morris looked back on the heartbreak of his final day, he also reminisced about the job he had done and why he even got into the field to begin with.

As a teenager, Morris saw several devastating moments that went a long way in determining his future.

It started when he was driving and pulled up on the scene of a bad wreck that included an overturned vehicle.

“I remember stuff being everywhere,” he recalled. “Then, I had to hold an 11-year-old’s hand while they died.”

That, however, was just the start of a string of traumatic events in a short period of time. All before the age of 19, he witnessed a man shoot his girlfriend, saw another wreck where a friend of his was ejected from a vehicle and watched as a co-worker leaned back into power lines while on a ladder.

“All of that was as a teenager. I couldn’t do anything but hold their hand,” Morris said. “After that, it was like, ‘you better learn how to do something, you better learn to save a life.’ It felt like the Lord was leading me down a path.”

Morris went on to help start the fire department in his community of Kingdom Crossroads outside of Columbiana around 1990, joined Southeast Shelby Rescue as a responding member, got his EMT license and then went to nursing school.

A friend, however, was pushing him to join Shelby County 911.

Finally, after being asked for a while, he took the job around 1998. And from there, he found his calling.

“It is truly a calling for anybody to get this job and stay in the job,” he said. “If somebody wants a rewarding job, it’s definitely a rewarding job. You know you’ve done your best to help people every day, and I look back on that proudly.”

In his time at Shelby County 911, he holds the record for helping deliver babies over the phone before EMS arrived and also took five heart attack calls within a few minutes, both of which earned him top awards such as the Emergency Dispatcher of the Year in 2020.

“I’ve helped countless people over the phone,” Morris said. “You may not ever see them or meet them, but you help them nonetheless, and that’s a rewarding feeling.”

However, the job comes with a level of stress most on a daily basis don’t have to deal with, which is partially what led to Morris deciding now was the time to retire.

“It’s a lot of mental stress. It’s similar to full-on PTSD. You’re on the phone with that person until rescue gets there, and you’re likely the first person they’re talking to in a traumatic moment,” he said. “Sometimes, you can hear the anguish of a mother who is seeing her child have a seizure for the first time or you’re dealing with a suicide. It can be tough, but you just try to be the calming sense for them.”

Morris said the number-one key to the job is to be patient and make sure you know what is going on and where it is happening. Once he has those details, then he can get somebody on the way to help them, which is his number-one priority.

“You are the calm to them in that moment,” he said. “You help them through the process of whatever they’re looking at. Whether a kid is in the pool drowning, a mother stopped breathing or a brother is having a heart attack; you do whatever you can to help save their lives.”

However, he knew it was time to retire because of how much the job has worn on him over the years.

“I was already at the capacity of, ‘It’s time for a break mentally to destress from the volume of emergencies that have stacked up in my mind over the years,’” he said. “You see things, you smell things, you hear things, and they all bring back a memory of an event. Everybody I’ve talked to has said it can take up to two years to destress.”

But that doesn’t make leaving any easier. As someone who made a difference for so many years by helping many through stressful times, he knows he’ll miss it now that the headset is officially off.

“I actually truly do enjoy the aspect of helping people. I truly enjoyed the part of being a call taker,” he said. “I loved dispatching, but I especially loved being a call taker to be on the phone and help people through situations. I will miss that. It may be 150 people a day you help, but add that over 23 years, that’s a lot of people.”

Smile a Mile Ride of Love coming to OMSP…