Chelsea, Oak Mountain to open season as Game of the Week 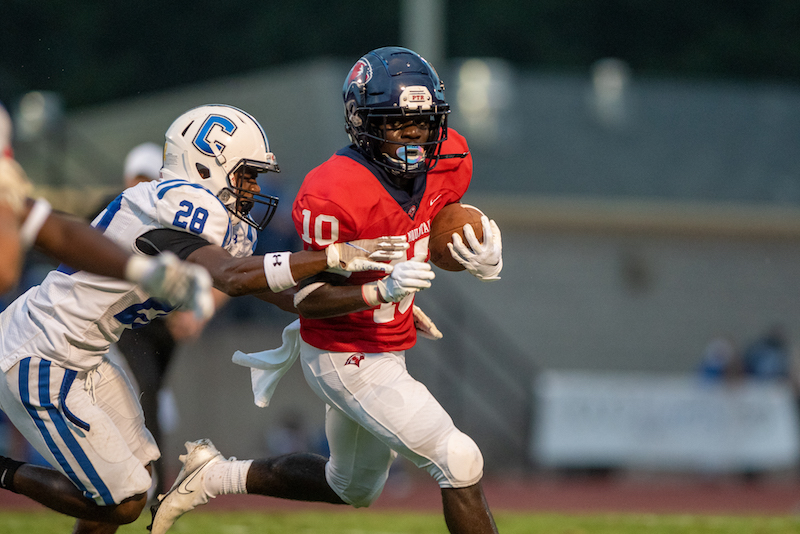 Chelsea will play host to Oak Mountain this Friday night in the first Game of the Week of the 2021 season. (File)

For the sixth consecutive year, 280-area rivals Chelsea and Oak Mountain will open the season against one another, and this one might have more build up than any of the previous five.

When the two meet at Chelsea on Friday night, the visiting Eagles will carry a four-game win streak in the series into the matchup, but will compete in their first game under new head coach Tyler Crane.

The Hornets, on the other hand, have lost eight of the nine matchups all-time between these two teams, but feel as confident as they have in a while going into year four under head coach Dustin Goodwin.

Chelsea will enter the season off a 4-6 mark a year ago, but the Hornets won three of their last five games to close 3-2.

What gives the team confidence heading into the season is the return of several key pieces offensively, particularly starting quarterback Hayden Garrison.

Garrison didn’t play against the Eagles last year in a 38-2 loss to open the season, but he did start the final six games to help the Hornets finish the season 3-3 overall.

After three points or less in three of the first four games last year, he provided a spark by leading Chelsea’s offense to 28 or more points in five of the final six games.

His return marks the first time Goodwin has had a quarterback for a second year since starting at Chelsea, which is giving the Hornets a big boost entering the season.

There are still unknowns across the team, specifically at running back, offensive line and across the defense, but it’s a team that should hang around in most games this season.

On the other side, you have another quarterback who is returning, but the Eagles are getting two extra years of experience as Evan Smith returns for his fourth-and-final year as a starter.

In his three years at Oak Mountain, he has helped the Eagles outscore Chelsea by a combined 97-11.

It is obvious what he will give the team this season, but there are several intriguing aspects to this year’s team that we will see unfold in the opener.

With the departure of Cris Bell and the hiring of Crane as the team’s next head coach, changes are expected.

The triple option offense of the past will likely become more of a spread out attack this year with more vertical play.

That likely means there will be more passing in this one season than the Eagles have shown in nine years.

Obviously, Oak Mountain won’t be abandoning the run, but handling those changes in a big early-season game can become frustrating if it doesn’t go according to plan.

Smith could also play on both sides of the ball as a defensive back commit to Northwestern, which might be another added change to the mix.

Oak Mountain definitely has the potential to be as good as last year’s 7-5 team that started 6-1 and finished 7-5 in the second round of the playoffs, but handling those changes will be key.

In game one, it’s hard to imagine there being no hiccups for the Eagles with new faces and what is being asked of them.

That said, Chelsea has questions that need answers at certain positions as well.

That’s what makes the early portion of the season so fun. We’ll learn a lot about both teams in the opener, but at the end of the day, it’s tough to see the Hornets making up what has been such a lopsided series the last three years.

This one will be much closer, but Oak Mountain holds the edge going into the matchup.