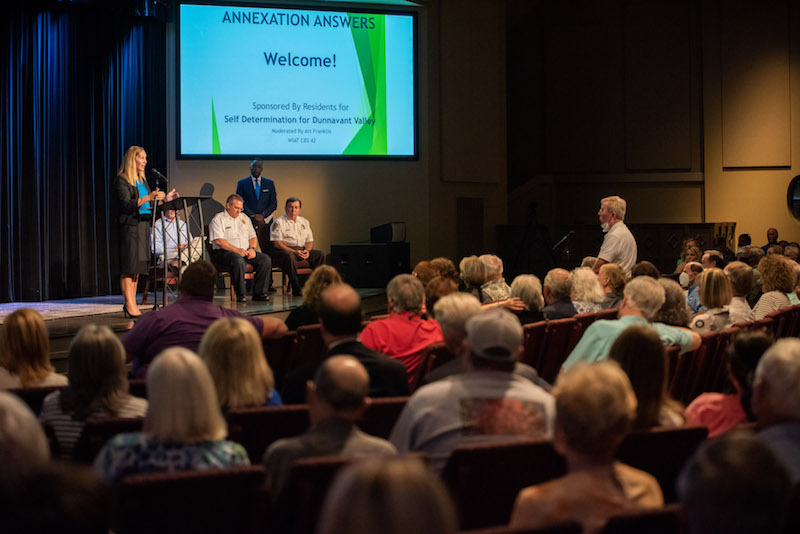 MT LAUREL – Chelsea’s discussion of potentially forming its own city school system has raised questions from residents in surrounding communities, and local leaders attempted to answer many of those questions at an Aug. 16 meeting at Double Oak Community Church.

Shelby County Schools Superintendent Dr. Lewis Brooks and Shelby County Probate Judge Allison Boyd were among several county officials who spoke to a large crowd at the first of two meetings organized by the Self Determination for Dunnavant Valley group.

Chelsea Mayor Tony Picklesimer also shared comments and answered questions about the city’s decision to conduct a feasibility study to determine whether Chelsea could separate from Shelby County Schools and form an independent school system.

The primary purpose of the meetings is to provide Dunnavant Valley residents with more information about the annexation process if Chelsea were to move forward with forming a school system.

“We heard a lot of rumors about annexation starting back in the early part of June, and we set about to research and to find facts so we could replace the rumors with facts,” said Jack Little, a Highland Lakes resident and SD4DV committee member. “The opinion we had was that we have an obligation to be involved and to be informed. This meeting tonight is all about answers, about annexation answers.”

Brooks said the first question he received from the media was whether he supported Chelsea forming its own school system.

“My response to that question was that I don’t know any school superintendent who would want to lose students,” Brooks said. “We very much value our students in the Chelsea zone. We value what our teachers and our administrators in the city of Chelsea have done. We even value the partnership that we have with the city of Chelsea. They’ve been very critical to a lot of things that we’ve been able to do in our school district over the years, and it certainly is appreciated.”

Brooks said if Dunnavant Valley residents choose to not annex into Chelsea, Shelby County Schools would rezone those students back to the closest school zone to the area, which would be Oak Mountain.

“One of the questions that was raised is has the board approved this move, and we have not,” Brooks said of the Shelby County Board of Education. “We have not taken action, nor have we created a time frame. We are studying the numbers, and we are studying the information.”

Brooks said the district would be able to accept students in the Oak Mountain zone without changing the structure of that zone.

Oak Mountain High School as 72 regular classrooms, not counting science labs or art rooms. The school has nearly 1,500 students and could accommodate about 1,800, Brooks said.

Brooks said another question he has heard is, “Why would you not build a school because you know growth is coming?”

“You cannot really invest money in a school to sit and wait on students,” he said. “As a school district, we don’t have unlimited resources. Our greatest investment, we believe, has to be in our children, and we do that. Eighty percent of our budget is dedicated to instruction and what goes on in the classroom.

Boyd gave an overview of how annexation and an annexation election would work, according to Alabama law.

If a city council decides it wants to annex a portion of property contiguous to the property already within the town or city, then the city council starts the process with a resolution, according to Boyd.

“Once that resolution is passed, then it is the mayor’s job (to certify) a copy of the resolution to the judge of probate,” she said. “They have to attach a map or a plat that specifically and legally describes the property that they wish to annex.”

Consent would be achieved if, within 10 days of the filing of the resolution, each of the qualified electors who reside in the territory described appears before the probate judge and consents to the annexation in writing. In this situation, no election would be held.

If consent is not achieved, Boyd would have to set an election.

Boyd said a qualified elector is defined as “a person who has resided within the boundaries of the territory proposed to be brought into the city or town for three months preceding the election,” and he or she must also be a registered voter.

Regarding which area or areas would be up for an annexation vote, Boyd said the decision would be based on the resolution and supporting map or plat filed by the city (in this case, Chelsea).

Picklesimer said he did not receive an invitation from the meeting’s organizers to attend, referencing a social media post that indicated he had declined an invitation.

“I felt like it was imperative that I be here to let you know that was not true,” he said.

Picklesimer said he and the Chelsea City Council have tried to be transparent throughout the process, starting with the announcement of the city’s intention to have a feasibility study done.

“We had the option to conduct our study as confidential and private and not to announce it until the results were in and the study was complete. We chose not to do this; we chose to order this as a public document. We chose it to be made public so that the information would be available to anyone and everyone who wanted to read it and study this report.”

Picklesimer said his desire from the outset has been to keep the nearly 4,600 students who attend the five Chelsea area schools together.

Picklesimer reiterated the annexation would occur only by a majority vote of the area’s residents in an election, as Boyd explained.

“It is obvious that the most outspoken group from the Dunnavant Valley are not interested in hearing a proposal from the city of Chelsea, in being a part of our city or in being a part of our city school system,” he said. “I believe the desire of some of the group to oppose our plans is to convince residents that a no vote by your community would stop our effort to form our own school system—that without the tax base and the student base from the Dunnavant Valley, our plans would simply die and go away. That simply is not true.”

Questions arose about fire services and fees for Dunnavant Valley residents if the area were annexed into Chelsea city limits.

“If the entirety of the valley would come in, then the city of Chelsea would become your primary fire coverage,” Cahaba Valley Fire Chief Buddy Wilks said. “We still have a lot of area that is not part of Dunnavant Valley, so that’s pretty much everything on the other side of the mountain. Our services would move only to the other side of the mountain, and Chelsea would become the primary fire service for this valley.”

If annexation occurs, residents in the area to be annexed into Chelsea would be required by law to pay a six-year lump sum buyout to the Cahaba Valley Fire District, Wilks said.

“That is put into the law to protect fire districts because our only source of revenue is fire dues,” Wilks said. “If the entire Dunnavant Valley were to choose to go into Chelsea, that’s about two-thirds of our budget that goes away.”

The financial burden associated with a fire dues buyout for residents poses a significant obstacle for potential annexation.

“Although we have not formally offered annexation to any community outside of our corporate limits, and with the current set of circumstances regarding our inability to reach an agreement with the Cahaba Valley Fire Department, I no longer see a path forward to offer annexation to Highland Lakes, Dunnavant Valley or the Mt Laurel community,” Picklesimer said.

The student count from the Dunnavant Valley area is just over 1,000 and represents about 20 percent of the total number of students at Chelsea’s five schools.

“We want to keep all students together, but frankly, it is not a requirement for us to move forward,” he added. “We will continue to press on toward our goals, regardless of the situation in Dunnavant Valley.”

Citing Chelsea’s need for a new high school, Picklesimer said he will propose that a new building be constructed in the Pine Mountain Preserve development across from the Chelsea Park community on U.S. 280.

“This is not and has never been an academic issue,” he said. “Lewis Brooks and his team, and the teachers and administrators at our five schools, do an outstanding job. This is a facilities issue.”

Picklesimer said officials estimate the property tax needed to fund a school system would fall into the 25-30 mills range.

Picklesimer said the results of Chelsea’s feasibility study are due in mid-October.

If the results are favorable for the city to form a school system, a school board would be appointed in early 2022, and the target date for the new school system to launch would be July 2023.

The second meeting, sponsored by Friends of Dunnavant Valley, will be held on Tuesday, Aug. 17 at 6 p.m. at Double Oak Community Church.