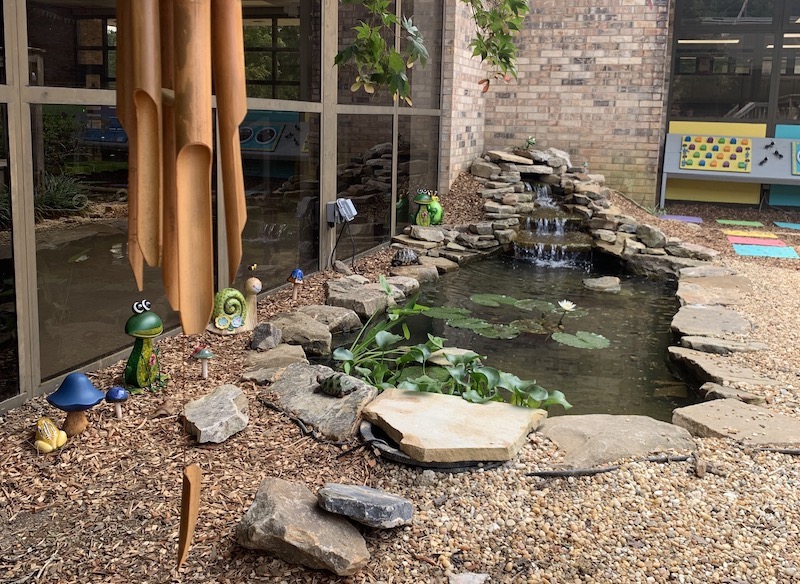 The PTO of Elvin Hill spent July turning a vision they’d had for two years into a reality for their school. Cats Cove is a space for learning, exploration and mindfulness. (Contributed)

The Elvin Hill Elementary Wildcats of the Columbiana school system have a new space to help them chill out when things get a little stressful. Cats Cove is the new name for the courtyard that is the central focal point for the main hub of activity at the school. Thanks to the vision and imagination of the school’s PTO and a little community help, this outdoor resource for teachers and students has just come into a complete renovation.

The idea started in the 2019-2020 school year when members of the PTO saw the need for the small water feature in the courtyard to be updated.

“It was a small little pond that had become mostly a mud spot,” PTO president Amy Dixon told us. “We just wanted to fix that spot to make it cleaner and more attractive because you could see it first thing when you walked into the school.”

The project took a back seat, though, when schools shut down that spring and the PTO moved on to a project that was more suited to the community’s new reality. Over this summer, the idea was revived and expanded as renovating the entire courtyard became the bigger goal.

“We saw an opportunity to let kids get an occasional break from the traditional indoor classroom, but still create a space geared toward learning and stimulation,” Dixon went on to say.

New sensory boards were installed to keep fingers busy. Chalkboards with free spaces and guided activities line one wall. A sensory sidewalk has become the center of the courtyard. A mesmerizing whirligig garden was created. A hammock spot for quiet reading and reward time was set up.  Plant life and decks were cleaned up and pressure washed. And, of course, Principal Cortney Madison’s favorite, thanks to the help of Alabama Aquarium and Lhoist—the pond, home to two small turtles, has been revitalized and expanded.

“The added sound of the water is the perfect touch to making this a calm and relaxing space,” Madison said.

The PTO could not have pulled off this project without a lot of community support. The new football coach at Shelby County High School, Zeb Ellison, did not hesitate when asked for the help of the football team when it came to unloading 100 bags of mulch and 50 bags of sand off of a trailer. Middle schoolers spent an afternoon painting panels in bright eye-catching colors. A squad of fifth grade boys delighted in helping with some of the deconstruction needed to be able to reconstruct some areas. And student dads like Joel Dixon and Chuck Fant helped construct sensory tables, the grid for the sensory walkway, and repair parts of the two decks that are part of the courtyard. There was even a community help day where parents and community members showed up to help pull it all together a couple of weeks before school started.

Cats Cove’s first two days of school proved its effectiveness, when teachers, alerted to new students struggling with first-day jitters, gave such children a tour of the courtyard to calm their nerves.

One parent participant said, “It’s projects like these, where the community and school come together so perfectly, that our kids get the message that they live in a place where they are loved and cared for, and I think that can make such an impact on our town’s future.”