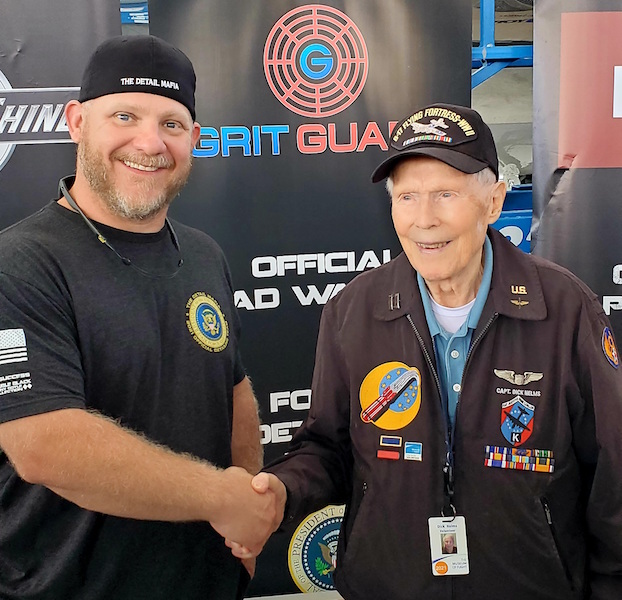 But when Gill, 39, was chosen to work on two high-profile aircrafts at the Museum of Flight in Seattle this summer, he did not hesitate to commit to the special project.

Gill, who owns D&P Auto Detailing, was one of 20 people selected for the 2021 Air Force One Detailing Team by Renny Doyle, a master automotive and aircraft detailer and detailing trainer with Detailing Success in Big Bear, California.

“I was very fortunate to be a part of that 20, especially being a rookie,” Gill said. “You have to train with him. He selects a number of veterans to be team leaders, and then the rest of the people are selected due to their activity and loyalty to the group.”

The team spent a week in Seattle detailing the first presidential jet, Air Force One, and a historic World War II B-29 Bomber on display at the museum. 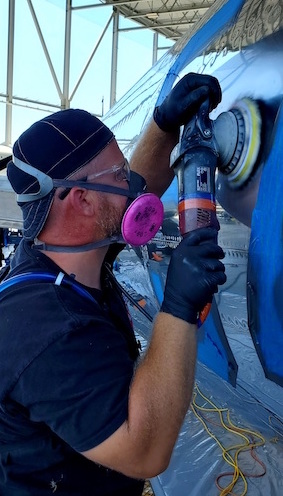 Gill polishes the exterior of Air Force One at Seattle’s Museum of Flight during a week-long project with the 2021 Air Force One Detailing Team. (Contributed)

The Boeing 707-120 entertained many international VIPs, such as Nikita Khrushchev and Henry Kissinger.

Doyle and his team started restoring the jet 18 years ago when it was displayed on the open tarmac at the museum, exposed to the elements. They restored its deteriorating paint and polished its aluminum surfaces, and now, the plane sits under the museum’s Aviation Pavilion.

The team is considered the official caretakers of Air Force One and 15 other planes on display at the museum.

This year’s team was smaller than usual and focused only on Air Force One and the WWII B-29 Bomber.

Known as T-Square 54, the 1950s B-29 Superfortress Bomber still bears the holes where bullets struck her aluminum skin while flying sorties over the Pacific and Japan during the war.

The Museum of Flight acquired the plane after it was abandoned in the Arizona desert.

According to Gill, this year’s restoration project likely would not have happened without a benefactor named Marlene Houtchens, whose husband, pilot Lowell Houtchens, flew the plane while stationed with Enola Gay pilot Paul Tibbetts in the Pacific during WWII.

Marlene and WWII veteran pilot Dick Nelms have provided historical context and financial support for the museum to preserve and protect the planes.

Gill said meeting Nelms during the trip was an honor. Nelms, 99, completed 35 missions and earned the Distinguished Flying Cross, five Air Medals and a presidential unit citation for piloting a B-17 Flying Fortress over Germany and Nazi-occupied Europe in 1944.

“What amazed me the most is he graduated from flight school at age 20, and at 21, he was flying missions for the U.S. Air Force,” Gill said, adding a highlight for him was listening to Nelms speak about his life.

Another highlight of the trip for Gill was when his mentor passed an American flag to him, a gesture meant to commend Gill for his growth as a business owner and person.

Prior to starting his business, Gill dabbled in detailing as a hobby, particularly with classic cars.

“I’ve always enjoyed it growing up,” he said. “We’d go to car shows, and I always loved seeing them shine and be clean, pretty and polished.”

He was working full-time at Alabama Power’s Gaston Steam Plant in Wilsonville, but felt a pull toward a new chapter in the detailing world.

“I decided one day to take it seriously,” Gill said. He trained with Doyle for a week in California and started out as a mobile business before opening his shop on Highway 25 in Vincent nearly a year ago.

“I love it,” he said. “It’s the satisfaction of seeing an end result. A lot of jobs people do, at end of the day, you can’t see what you’ve done. You just kind of accept what it is. Everything I do at my shop, there’s an end result.”

Many of the detailing team members are senior members whose experience dates back to the original restoration project in 2003. Doyle also selects several rookies each year to join the team.

Team members pay their own way to Seattle and donate their time to the annual project.

“It’s a very humbling experience to say the least,” Gill said. “Being chosen is one thing, but to be able to go has been quite the adventure.”

Shelby County remains one of largest, fastest-growing counties in…