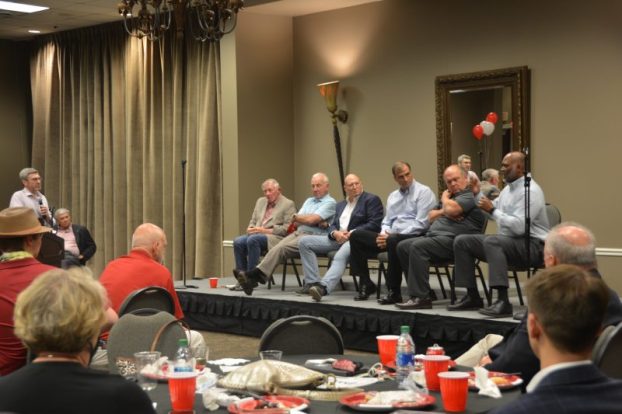 PELHAM – The Pelham Civic Complex conference room was a sea of crimson pride on Aug. 19. Football fans and members of the Shelby County Chapter of the Alabama Alumni Association flooded in to celebrate the kick-off of football season by honoring past Alabama football players and celebrating this year’s scholarship numbers.

Guests were treated to a roundtable discussion featuring six former Alabama football players, three of whom played under the leadership of Coach Paul “Bear” Bryant.

The discussion was moderated by ESPN college football analyst Brad Edwards, who is also an Alabama alumnus and author of “Dynasty By The Numbers: Why Alabama Now Owns the Greatest Decade-Plus Run in College Football History,” a book chronicling the reign of Alabama football through the years.

“I was able to learn a lot of things that served me well over the years [at Alabama],” Edwards told the crowd.

He added he wishes the current population of students could understand the true importance of Alabama football and what it means to the SEC. Through his book, he said he hopes they can form an appreciation for what makes Alabama football special.

“When you’re the greatest team in the sport, you don’t want to go back and learn about the teams that made you the best in the sport,” he said. “But it is so important that you do.”

The six former players present for the roundtable were: Jimmy Sharpe, who played guard on the ’61 NC team and was offensive line coach on the 1964, 1965 and 1973 NC teams; Jerry Duncan, who played on the 1964 and 1965 NC teams as an offensive tackle; Steve Sprayberry, an All-SEC tackle on the 1973 NC team; Buddy Aydelette, an All-American tackle on the 1978 and 1979 NC teams; Jim Bunch, another all American tackle from the 1978 and1979 NC teams; and Tony Johnson, who played tight end on the 1992 NC team and played for the Colts professionally for about six years.

Topics discussed ranged from stories about best and worst games to what it was like to represent the team.

The most popular area of discussion was the legendary Coach Bryant, who was described by Jim Bunch as a type of powerhouse.

“I need everyone in the room to get silent,” he said. The room followed suit. “That’s what it was like when he walked into a room. I’ve never seen a man walk into a room and just automatically command such respect.”

Jim Sasser, past president of the Alumni Society, smiled with pride as he highlighted the growth of the Shelby County chapter.

“This club exists to raise money for scholarships. This chapter has gone from seven to 15 [scholarships] in the last two years and they’re endowed scholarships,” he explained. “Our scholarship funds have gone from almost $200,000 to almost half a million dollars. We have great sponsors and people who donated to those scholarships. Now the key thing about that is we get matching money from the National Alumni Association so every dollar our chapter or our members put in in the name of the chapter, is matched 100 percent by the National Alumni Association.”

“Shelby County has 13 total scholarships with an approximate total of $480,000 awarding 10 students for this academic year and that’s just fantastic,” she said.

Wyatt said providing a chance for the youth of America, whether they’re from Shelby County or across the country, is “the heart and soul of everything we do.”

“Everything we do throughout the year whether it’s raffle ticket sales or golf tournaments or other events we have, it’s all to raise that money for scholarships,” she said. “We know there are so many deserving students out there that without scholarships they probably wouldn’t be able to attend UA.”