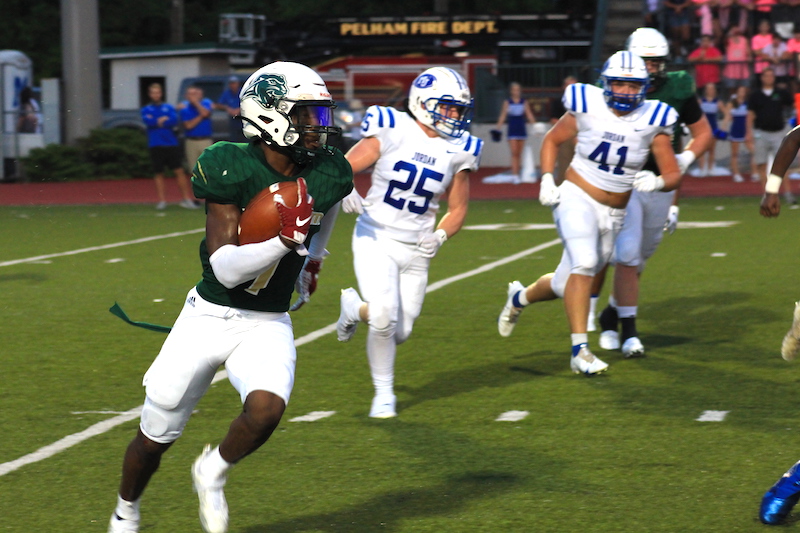 The Pelham Panthers opened the 2021 football season with a dominant 42-6 win against Mortimer Jordan on Friday, Aug. 20. (For the Reporter/Stephen Dawkins)

By STEPHEN DAWKINS |Special to the Reporter

PELHAM – Pelham’s football program has made steady improvement over the last six seasons, and during a season-opening 42-6 win over visiting Mortimer Jordan on Aug. 20, the Panthers may have shown that this season will be another step forward.

PHS defeated Mortimer Jordan 28-21 last year on its way to eight wins, the most of coach Tom Causey’s tenure, which is now in its seventh year.

Pelham left no doubt this year, running away with the game early with a stifling defense, powerful running game and the arm of quarterback William Lankford.

The Panthers fumbled their first offensive snap and then punted ball after three plays, but the hosts scored touchdowns on five of six first-half possessions after that, sometimes making the Blue Devils look completely overmatched.

Lankford scrambled into Mortimer Jordan territory on Pelham’s second possession of the game, and then faked a handoff and ran in from 29 yards out for the game’s first points. Fabian Calderon’s point-after made it 7-0 with 5:33 on the clock in the first quarter.

Calderon was good on all six of his extra point attempts for the game.

The next score was set up by a strike from Lankford to Christian Pritchett, and then Gabe Gamble took a handoff and pushed the pile into the end zone from eight yards out with 10:02 remaining in the second quarter. 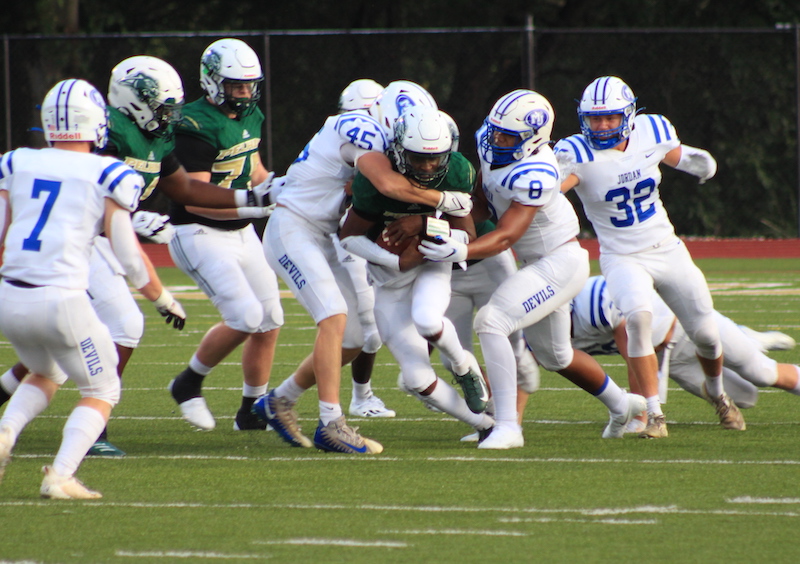 Mortimer Jordan forced a punt the next time Pelham had the ball, but the Panthers were far from done piling on in the first half.

With 1:28 left in the half, Lankford tossed it to Corkill down the right sideline from 30 yards out for another touchdown.

A Blue Devils three-and-out left time on the clock for Lankford, and he didn’t need much, this time finding Gaeton Rellah from 30 yards out with eight ticks left on the clock.

The Pelham defense, meanwhile, was just as dominant as the offense, holding the visitors to just as many turnovers (one) as first downs in the half.

The Panthers did it again on the first possession of the second half, forcing a three-and-out that gave Darius Copeland an opportunity to field another punt.

Copeland made the most of the chance, outracing the Blue Devils for a return of about 60 yards and a touchdown.

The onslaught slowed at that point, as Mortimer Jordan was able to find a measure of success as the Panthers began rotating in substitutes. Still, the visitors had to fight for their only points of the game, which came on a fourth-and-goal play from Pelham’s 4-yard line, when Ames stood in the face of the PHS pass rush and found Coleman Maldonado crossing the middle of the field in the end zone with 5:04 on the clock in the third quarter.

The point-after attempt was no good.

Gamble rushed 11 times for 95 yards, and Copeland had two rushes for 39 yards to go along with the punt return touchdown.

Brayden Marlowe paced the PHS defense with seven tackles and a fumble recovery.

Pelham next will host Oak Mountain on Aug. 27.

Mortimer Jordan will look to rebound with Corner next week. The Blue Devils won only one game last year but the year before that made an appearance in the semifinals of the Class 6A state playoffs.