Thompson falls in battle of No. 2 teams to open season 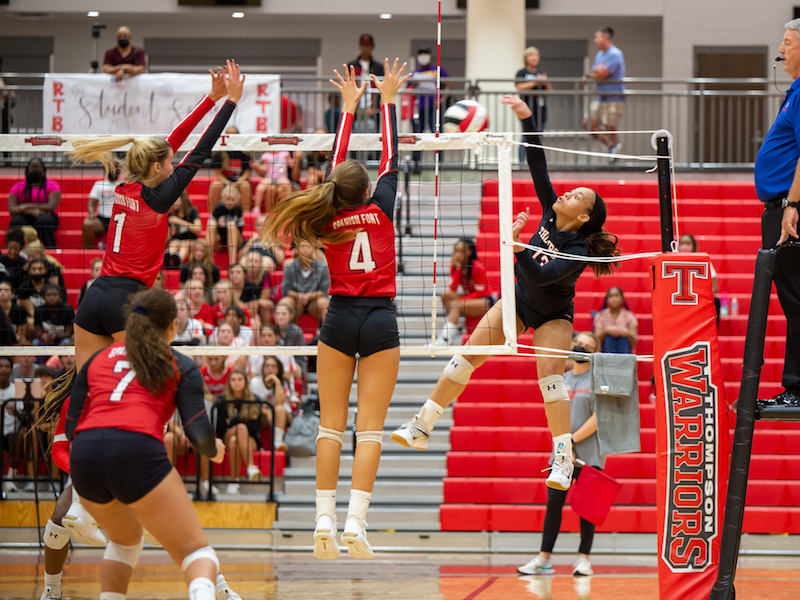 The Thompson volleyball team fell to Spanish Fort in a battle of No. 2 teams on Thursday, Aug. 19 to kick off the 2021 volleyball season. (For the Reporter/Larry Dancy)

ALABASTER – The Thompson Warriors wanted a challenge right off the bat in their season opener, and the Spanish Fort Toros provided that and more.

With both teams ranked No. 2 in their respective classifications, fans at Warrior Arena expected a close match, but the Toros played an efficient, aggressive game from the start and closed out each set well in the clutch to pull off a 3-0 (25-19, 25-18, 25-22) sweep.

Errors plagued the first set for Thompson as they appeared out of sync offensively. Spanish Fort took seven of the first 10 points and slowly built its lead from there.

Down 12-7, the Warriors battled back with impressive kills from Jada White and Kaitlyn Grant.

THS struggled from the service spot, but drew within 19-18.

However, their fourth service error of the set gave the Toros a 20-18 lead, and they scored five of the next six points to close out the set.

Spanish Fort’s best frame would come next as they combined great defense and service to throw the Warriors off their rhythm. They built a 16-9 lead with three aces and three blocks at the net.

Thompson looked like it would mount a run, but the service errors came back to bite the Warriors again by allowing the Toros to pull away.

The Warriors loaded up for a final push in the third set and seemed as if they found their footing at last.

However, the Toros had one final push in them to put them over the top on the road. They finished on a 9-3 run and added three more aces to give them seven for the match.