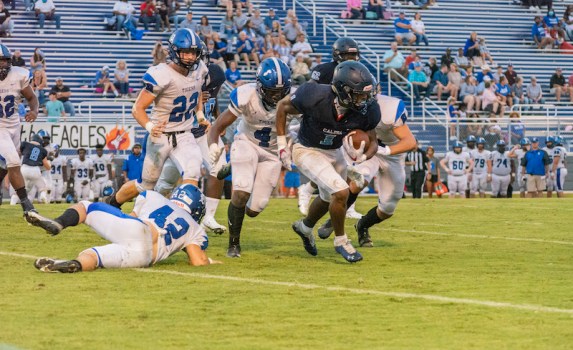 Calera’s Kobe Prentice avoids a tackle during the Eagles’ season opener at home against Demopolis on Friday, Aug. 27. (For the Reporter/Markee Canada) 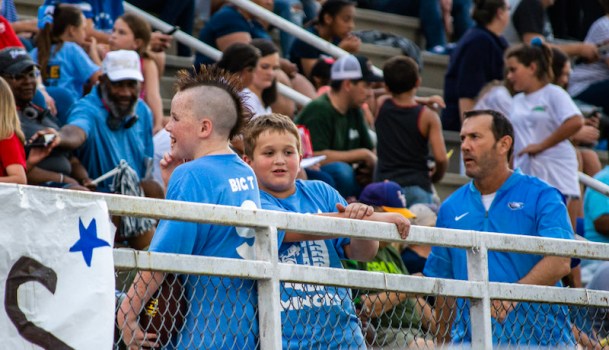 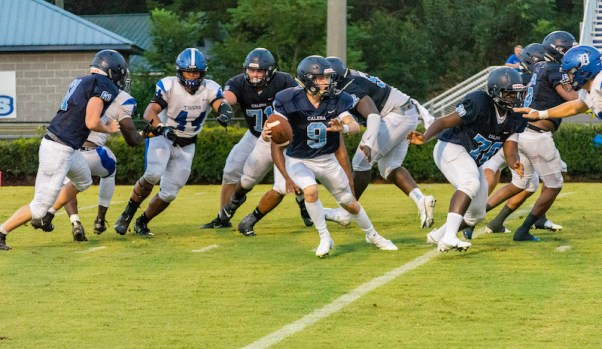 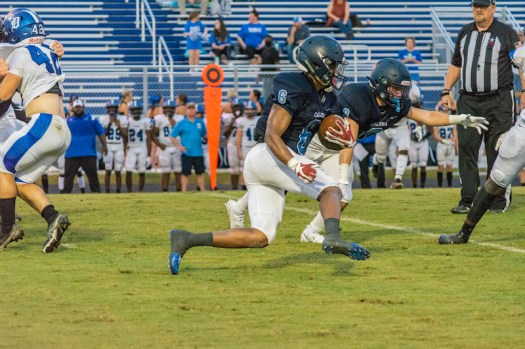 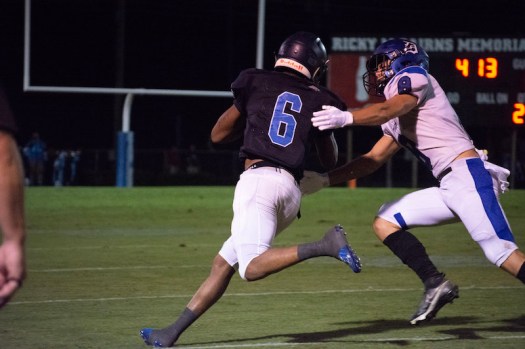 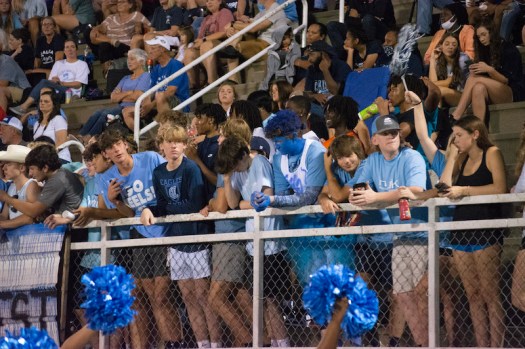 CALERA – Fans came out in droves to see the Calera Eagles take on Demopolis in their season opener on Aug. 20, and the Eagles did not disappoint their home crowd, topping the Tigers 26-22 for the first time in school history after close calls the last two seasons.

“I could not be more proud of the guys to give me my first win as head coach,” Hamlin said. “I’ve been telling everybody I didn’t do anything. The kids have just bought in so far.”

Hamlin said the win was big for the seniors, who had never won at home.

“We talked about how important that is, how awesome that would be for them to start off the season 1-0 and get a home win,” he said. And with several big plays on offense and defense, the team did just that.

Neither team was able to put points on the board in the first quarter.

The Tigers were the first to strike in the second quarter with a Craig Nichols touchdown run. The extra point attempt was blocked, leaving Demopolis with a 6-0 lead with 4:22 left on the clock.

Calera eventually answered with a 66-yard pass from Preston Stokes to Kobe Prentice, who found the end zone with about 3 minutes left in the half.

With a 7-6 lead after the extra point, the Eagles then got a big stop, forcing Demopolis to punt from their own 26-yard line.

Calera didn’t let the last two minutes of the half go to waste, tacking on seven more points with another Stokes-to-Prentice 41-yard touchdown pass with 57 seconds left.

Going into halftime up 14-6 gave the Eagles the momentum they needed to prepare for what would be a busy second half.

“We were able to kind of carry that momentum a little bit,” Hamlin said. “Our goal was to win the game, not just one half. When we came out (in the) second half, Demopolis responded and responded well, and we just had to settle down and get back to what we do on offense and defense.”

Demopolis scored first on another Nichols touchdown run up the middle. A 2-point conversion tied the game 14-14 with about 5 minutes to play in the third quarter.

Several minutes later, Calera tried to capitalize on a nearly 50-yard pass to Chris Cotton, but a holding penalty brought the ball back.

Demopolis got the ball to start the fourth quarter and opened with a seven-play, 65-yard drive, capped off with a 12-yard run by Nichols. They added a two-point conversion to make it 22-14 with 8:20 left in the fourth quarter.

The Eagles were quick to answer. Cotton started with a 49-yard run, followed by a 13-yard touchdown run. A 2-point conversion was no good, leaving Calera trailing by two.

After an unsuccessful onside kick, the Eagles got a much-needed stop. On a fourth-down play, Wesley Head picked off Drew Seymore, giving the Eagles their first turnover of the game.

A few plays later, Stokes connected with Prentice on a 14-yard touchdown pass to put Calera ahead.

With 1:22 left, the Tigers had one last chance to regain the lead, but the Eagles defense held strong, forcing a turnover on downs.

With 48 seconds remaining, Hamlin called for the victory formation.

“It was a great win,” Hamlin said. “We’re excited to have the first big win, but we’ve got a lot to work on, executing when the pressure’s on, both offensively and defensively.”

Hamlin pointed to big playmakers like Prentice, who had three touchdowns on the night, as well as Head and Andre Green on defense.

“Defensively, our secondary came up with some big plays and a couple of interceptions,” he said.

Cotton had 17 carries for 89 yards and one touchdown.

Prentice had five receptions for 123 yards and an interception in addition to his three touchdown catches (66, 41 and 14 yards).

Michael Banks had 16 tackles, and Mason Green had nine tackles.

The Eagles will face Jackson-Olin in a non-region matchup on Friday, Aug. 27.