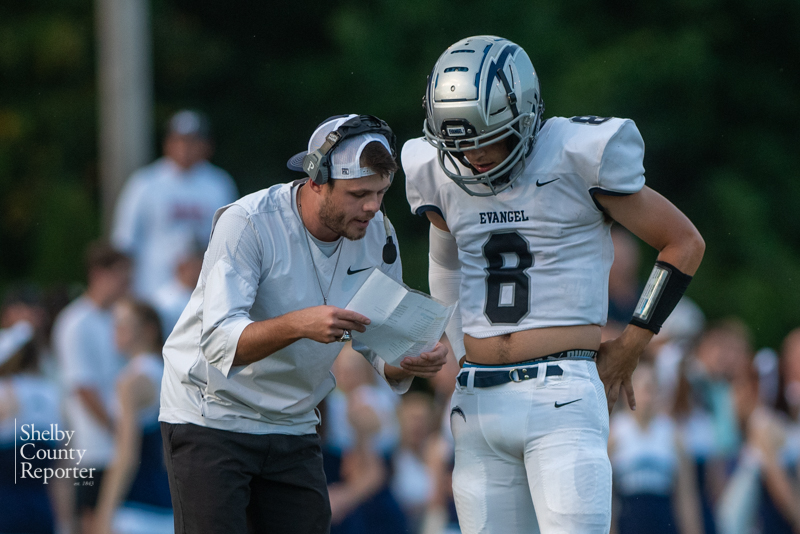 “One of the best things about tonight is we got to play all 46 kids that dressed, and we came away with no injuries. We got a little better,” Smith said. “We’ve got a bunch of kids that’s either never played football or it’s been several years since they played football. It was good to get them in, and it will help us down the road when it’s their turn.”

Tyler Wilson opened the game with touchdown runs of 17 and 12 yards to help Evangel to an early 14-0 lead. With seven carries, he finished the game with 114 of the Lightning’s 213 rushing yards.

Evangel added a sack and an 8-yard touchdown pass from Eli Whitfield to Judah Thompson to lead 22-0 at the end of the first quarter. In the second quarter, Hunter Adkins (5 yards), Whitfield (23 yards) and Jackson Padlow (15 yards) each ran in touchdowns to extend the Lightning’s lead to 43-0 at the half.

Adkins added a 17-yard touchdown in the third quarter and Riley Mason scored from 5 yards out in the fourth to cap the night. Lucas Mast kicked four extra point and Victor Kyatt was 2-2.

Whitfield finished the night 3-of-9 passing for 33 yards, with Harris Black reeling in 23 yards receiving.

Evangel (2-0) returns home Friday, Aug. 27 for an 8-man game against Chattanooga-based Grace Baptist Academy, which has outscored opponents 160-6 in its first two games.