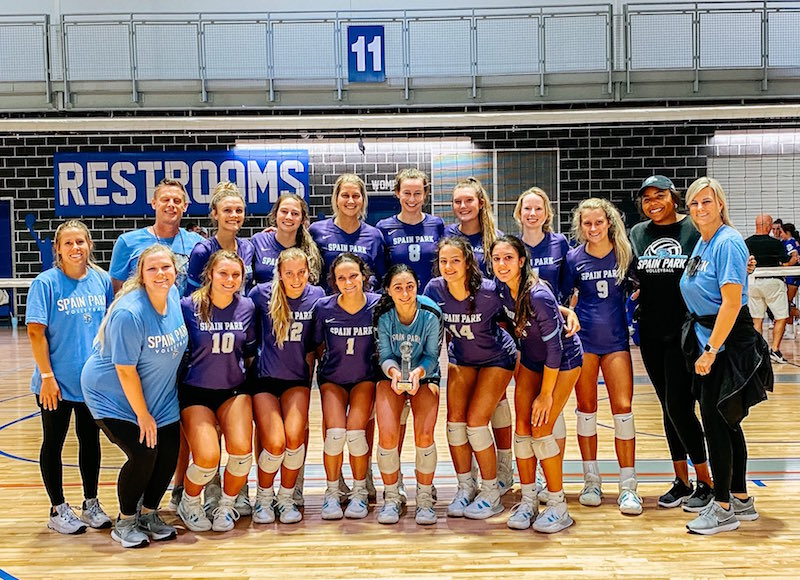 The Spain Park Jaguars put together a perfect 8-0 record at the Juanita Boddie volleyball tournament to improve to 10-0 on the season without dropping a set. (Contributed)

HOOVER – The Spain Park volleyball team entered the season ranked No. 1 in the Class 7A standings, and the Jaguars have quickly backed up that ranking.

After sweeping a tri-match on Thursday, Aug. 19, the Jags went on to win eight more matches in a row over the weekend to claim the Juanita Bodie tournament championship on Saturday, Aug. 21.

The Jaguars won both of those matches in straight sets with 2-0 final scores against each.

That gave Spain Park a 2-0 start to pool play, and the Jags followed it up a day later on Saturday with two more pool-play wins in straight sets.

Back at 10 a.m., they took down Prattville 2-0 and then St. Paul’s Episcopal 2-0 to finish pool play a perfect 4-0 without dropping a set along the way.

Already 6-0 on the season at that point, the Jags were confident going into bracket play and it paid off.

In the first matchup of bracket play, Spain Park continued the perfect tournament with a 2-0 sweep of Class 7A foe Vestavia Hills to improve to 5-0 in the tournament and stay alive for the championship.

The Jags then picked up their biggest wins of the season in consecutive games to earn a spot in the championship match.

First, they took down No. 3 McGill-Toolen in straight sets and followed that up with a sweep against county foe and No. 2 Thompson to earn a spot in the title against Bayside Academy.

With the pressure of the championship on the line, Spain Park still didn’t waver and closed off a perfect tournament with another straight-set victory against the No. 1 team in Class 5A to finish the tournament a perfect 8-0.

The Jags have now won all 20 sets they have played this season to improve to 10-0 as the top-ranked team in the state.

During the tournament, Audrey Rothman and Emily Breazeale put together remarkable efforts for the Jags across the court. Rothman paced Spain Park with 68 kills, 27 digs, 10 aces and five blocks, while Breazeale wasn’t far off those marks with 65 kills, 29 digs, 12 aces and four blocks.

Brooklyn Allison led the team in digs with 60, while she also added 11 assists and four aces. Bella Halyard totaled 84 assists for the Jaguars, while adding 37 kills, 24 digs and 10 aces. Lily Johnson also had a strong tournament thanks to a team-high 102 assists with 26 digs.

It marks the first time Spain Park has won the Boddie tournament, which is one of the more popular volleyball kick-off tournaments in the Southeast.