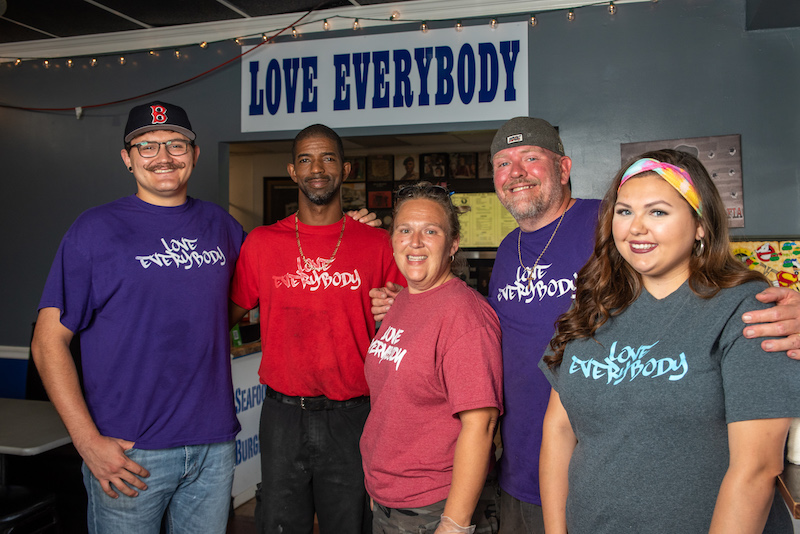 Chubbfathers Chelsea has closed because of ongoing staffing shortages, according to owner Will Cholewinski, pictured second from right. The Alabaster location of Chubbfathers and its two food trucks remain open. (File)

CHELSEA – Ongoing staffing shortages at Chubbfathers Chelsea have prompted the owners to close the restaurant permanently.

Cholewinski, who still operates the original Chubbfathers restaurant in Alabaster, made the announcement after previous social media posts indicated the Chelsea location had encountered staffing issues.

“We have had issues keeping a full staff since October, and we’re giving our team time off to regroup and see where to go from here,” an Aug. 16 post read. “We love you guys and will give more details soon.”

On Monday, Aug. 23, a new post read, “At this time the Chelsea location will remain closed. Thank you all for your continued support.”

Cholewinski and his family opened the Chelsea location of their popular restaurant in the former Johnny Ray’s space in Benson Plaza last fall.

Cholewinski said finding enough people to work has been “incredibly hard,” a problem not limited to Chelsea.

“Our new building in Alabaster was supposed to have been almost finished already, but because of supply chain issues and whatnot, it’s not going to be ready until the middle of next year,” he said.

In addition, Chubbfathers has entered into a contract with the University of Alabama to serve concessions inside Bryant-Denny Stadium during football games this fall.

“We just got down to four or five people, and it makes it real hard to run two food trucks and two restaurants with a staff of four or five,” he said. “We didn’t fail. Chelsea was a very successful venture, and that was because of the love and support of you guys, and I could not be more grateful.”

The opening of Chubbfathers in Benson Plaza last year marked Cholewinski’s return to Chelsea after Chubb’s Grub Station – the restaurant he opened more than five years ago – closed.

“I love this community,” he said in a previous interview. “I hated to leave when we had to leave the first time. I knew that we would be back eventually.”

Cholewinski thanked his nephew, Caleb Kelley, and his wife, Harley, who managed the Chelsea restaurant, along with the other staff members.

He also thanked their customers, many of whom shared words of encouragement and gratitude to the family in comments on social media.