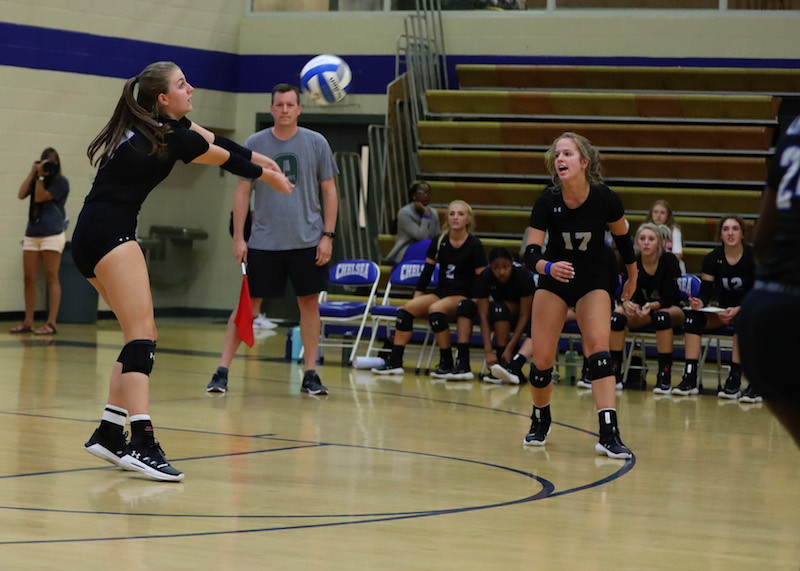 The Chelsea Hornets won their fifth match in a row to start the season thanks to a 3-0 sweep of Clay-Chalkville on Tuesday, Aug. 25. (For the Reporter/Cari Dean)

CHELSEA – The Chelsea volleyball team continued a dominant start to the 2021 volleyball season on Tuesday, Aug. 24 by extending a special streak.

The Class 6A No. 4 Hornets played host to Clay-Chalkville and not only picked up their fifth win in a row, but did so in straight sets once again.

Following a 3-1 win against Vestavia Hills to open the season on Aug. 19, the Hornets then won three in a row on Saturday, Aug. 21 against Benjamin Russell, Hueytown and Pell City all in straight sets.

That trend continued on Tuesday with their first 3-0 win of the season against the Cougars, and it came in dominant fashion once again.

In the opening set, Chelsea put together its best set of the season, winning by more than 20 points.

The Hornets took control of the set early and pulled away for an easy 25-3 victory to take a 1-0 lead in the match.

That ended up being the easiest set victory of the match, as Clay-Chalkville got better each step of the way, but the cougars never could make up the margin.

In the second set, the Hornets came out strong once again and still won by double digits thanks to a 25-11 victory, which gave them a 2-0 lead in the match.

The final set ended up being the closest with the Cougars looking to stay alive and battle out of a 2-0 hole, but Chelsea eventually put together one final push to close out the match with a 25-19 victory.

In the win, freshman Lauren Buchanan put together a special night, including a strong performance at the service line. She ended the match with 10 aces and helped the Hornets win the first 19 points in a row of the match for a 19-0 lead.

She also added seven kills to her stat line as the team leader. Madison Moore, a junior, led the team with 10 assists, while also adding five digs and three aces, finishing second on the team in both categories.