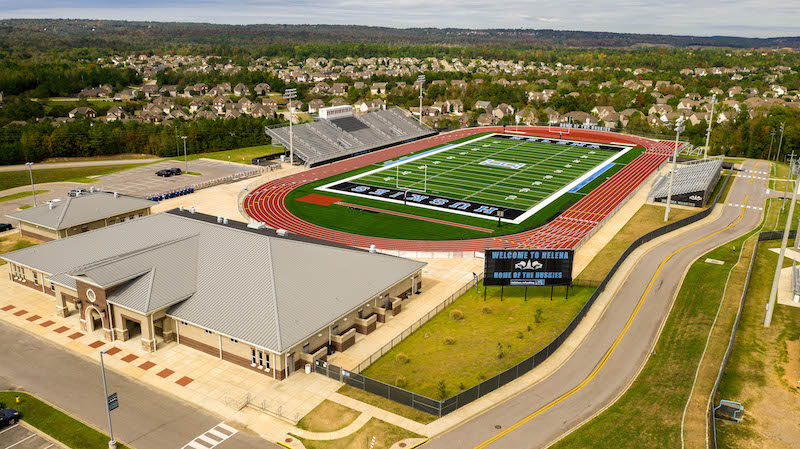 Former Helena Mayor Mark Hall will have the city’s high school sports complex named after him due to the role he and the city council played in bringing a new facility to the school. (Contributed)

By CINDY WARNER | Special to the Reporter

HELENA – The Shelby County Board of Education recently honored former Helena mayor, Mark Hall, by naming the school’s athletic complex after him in recognition of his and the city of Helena’s long-standing financial commitment and support of Helena High School.

A formal dedication ceremony will be held on Friday, Aug. 27 at 6:40 p.m. before Helena’s home football game against county foe Chelsea.

HHS Principal April Brand made a written proposal to the board in April to name the outdoor athletic facilities, including the football stadium and softball/baseball fields, in honor of Hall, who was instrumental during his tenure as mayor in seeing the $6.9 million athletic complex through to its completion.

“As a result of city revenue, along with Mr. Hall’s vision and determination, we were fortunate to have outdoor athletic facilities constructed when our school opened,” Brand wrote in her proposal to the board. “Over the past several years, Mr. Hall’s continued support resulted in over 600 additional seats at our athletic venues, an outdoor hitting facility, and the installation of artificial turf and a synthetic track surface in our stadium.” 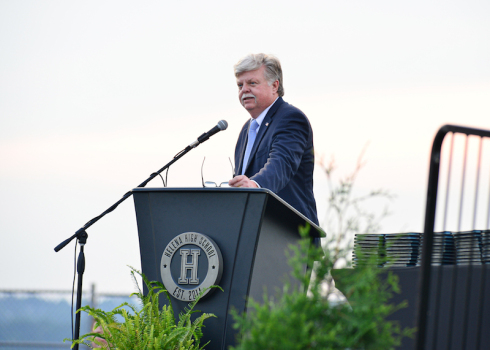 Hall gave the commencement speech to Helena’s class of 2020 at Husky Stadium. (File)

The athletic complex was funded through a 1-percent (1 cent) sales tax approved by the Helena City Council in 2011. The sales tax helped to fund a municipal bond issue dedicated to educational projects in Helena.

In addition to the athletic complex, the city also partnered with the Shelby County Board of Education to purchase the land used for Helena High School’s construction from USS Real Estate (U.S. Steel) for $1.6 million.

The partnership agreement between the board and the city stated that the city would invest financially through purchasing the property and building the athletic facilities, while the board committed $40.2 million toward the construction of the 180,000-square-foot high school building, which opened in the fall of 2014.

After the initial phases of construction were complete on the athletic facilities, Helena High School again benefited from the generosity of Mayor Hall and the Helena City Council with another $700,000 investment for synthetic turf at the football field, which is also used for soccer, and a new rubberized track that runs around the outside perimeter of the football field.

The financial investment of the synthetic turf has saved the school an estimated $30,000 a year in fertilizer and water expenses, while also helping to prevent the cancellation of football and soccer matches due to rain and poor field conditions.

Shelby County Schools Secondary Coordinator Jay Peoples said one of the first people he heard from when he was appointed as the first principal of Helena High School was Mark Hall.

The two forged a partnership and friendship to make sure Helena High School would have first-class athletic facilities from that moment on.

“All of this just wouldn’t exist without Mark,” Peoples said.

Peoples said Hall was a great sounding board and always had realistic, solid, and candid input about the facilities, the budget, and the city’s contribution to making it a reality.

“At the same time, he never tried to interfere with decision making. There was always a clear line in the observance of his role as mayor and my role as principal, and I really appreciated that,” Peoples said.

Both Peoples and Brand said that Hall’s decisions have always been both community- and student-focused.

“Every decision he made was based on what was best for current and future students and falls in line with our school’s values of doing what is right for kids,” Brand said. “He always wanted to make sure it was great, not only for our high school students, but the middle school kids too because they also play up here. What he and the city invested in with these facilities touches the entire community.”

Brand said the most special part of Hall’s investment wasn’t just monetary, but the time he invested at the school and making sure the students felt special.

“His presence as mayor was larger than life,” Brand said. “In the short time Helena High School has been in existence, former mayor Mark Hall made a lasting impression on the students by his constant support and enthusiasm for all things Helena High School.

“There have been very few instances where something was happening at Helena High and Mark wasn’t here. And not just with athletics, but with everything. The students who have come through this school have absolutely been positively impacted by the leadership of former mayor Mark Hall.”

During his announcement about the decision to not run for re-election during the most recent election, Hall commented on some of the aspects he was most proud of, and the school improvements were at the top of his list.

“I know that great schools make great communities, so contributing much needed extra funds to the Shelby County Schools located in Helena has always been a top priority,” he said. “To date, we have provided over $9 million to school related projects.”

Now, Helena has one of the top athletic facilities in the community because of that mindset.