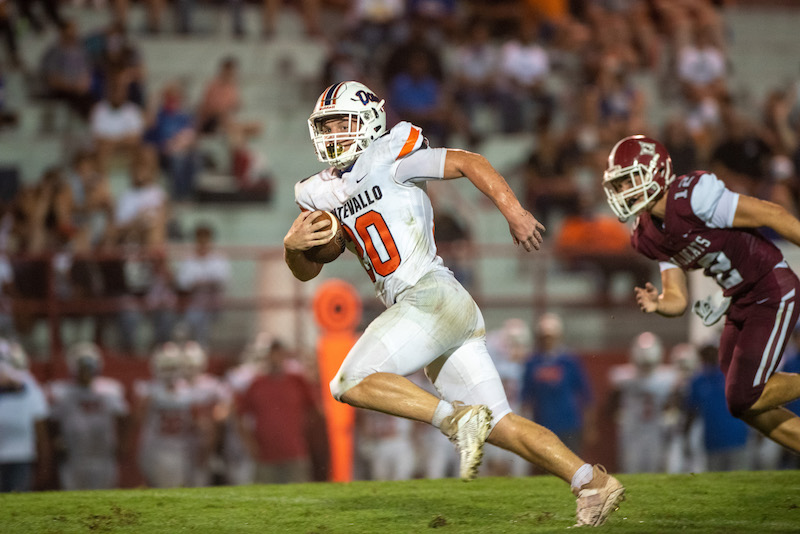 The Montevallo Bulldogs will play host to the Shelby County Wildcats this Friday night in a county rivalry and the Game of the Week. (File)

The opening week is in the rearview, and the mad dash to the finish has already begun, as the always-too-fast football season enters its second week.

Several big matchups highlighted week one, but this is the final week of non-region action and it features four county battles. That means not only will teams be looking to fine tune their play ahead of the region gauntlet, but in four of the 10 matchups, they’ll be taking on a rival hoping to build confidence.

It should lead to an exciting second week of action.

Montevallo vs. Shelby County (Game of the Week)

This renewed rivalry has had an exciting three years in a row with each game decided by 10 points or less, while the last two have been a flip of the script. After losing to Montevallo 22-12 in 2018, the Wildcats have now won two in a row in completely different fashion. Two years ago, it was a 56-50 back-and-forth battle, while last year it was a low-scoring, defensive battle in a 20-18 final.

This season, there is plenty on the line as well. It marks the first game for new Shelby County head coach Zeb Ellison, who graduated from the school, while Montevallo will enter game two of the season under second-year head coach Blake Boren, who also played for the Bulldogs. With two former players leading their teams, the passion and rivalry should build to a new level this season, making for a can’t-miss game. Both teams need the win to build some early-season confidence, but with tests against American Christian and Bibb County the following two weeks, Montevallo may need it a bit more. The Bulldogs were also close in a two-point loss last year and return most of their talent this year, while the Wildcats are entering game one under a new head coach with some unknown. Montevallo 27, Shelby County 21

After losing this game 52-21 in 2018, Oak Mountain has bounced back with revenge to win the last two in a row. Two years ago, it was a 21-7 win and last year, it was a tight 28-21 win. As one of two regular-season losses for the Panthers last year, however, they’re on the prowl for redemption now. Pelham is returning just about everybody from a team that lost by just seven, while Oak Mountain handled the pressure of change well in week one. The Panthers enter off a 42-6 win over Mortimer Jordan, while the Eagles downed Chelsea 46-19. This should be an entertaining battle the week before region play. My confidence has quickly grown in Oak Mountain, and they will win if they play the entire game like they did the third quarter last week, but I’ve been high on the Panthers all offseason and can’t back off now. Pelham 38, Oak Mountain 35

Another exciting battle a season ago, Spain Park was able to overcome a 14-0 deficit at the half with 21-unanswered points in the second half to pick up the win. This year, however, the Lions should be drastically improved offensively with the return of a strong offensive line, a 2,000-yard quarterback and an 1,100-yard running back. Briarwood fared well in week one with both Christopher Vizzina and Luke Reebals having big games in a 41-17 win against Madison Academy, while the defense gave up less than 150 yards. The Jags also got off to a strong start with a 37-13 win in their new style with Evan Smallwood, Zamir Farris and Zavier Long all playing well. This should be an entertaining battle that ultimately comes down to how Briarwood’s defense handles a unique offense. Briarwood 24, Spain Park 21

It is the home opener for Thompson, and that really should say enough. The Warriors are one of the most talented teams in the country this season, and while they have a lot of pressure to handle, they’ll be extra juiced up to play in front of the home crowd following a 55-0 win in a trip to Oxford. Thompson won this game 39-7 a year ago, and with Sparkman coming off a 34-20 loss to Gardendale in week one, the Warriors should be the heavy favorite once again. Thompson 42, Sparkman 7

It may be a non-region game, but this county battle will mean a lot to both teams, especially the Huskies after a 27-23 loss to the Hornets last year in the final minute. It marked the first of two weeks in a row Helena lost by six points or less after comeback attempts fell short. Chelsea, however, will be improved this season, especially on offense, while Helena will be replacing a few key players. A goal of the Huskies, however, going into the season is to start fast and finish strong rather than rely on coming from behind. They did that in week one in a 55-0 win against Dallas County, while Chelsea came out a little flat in the second half of a 46-19 loss to Oak Mountain. The Hornets did show a lot of potential, but a brutal first few minutes of the second half allowed the Eagles to pull away. Based on last week’s scores, you may expect a lopsided game, but this will be a tight battle. Helena 31, Chelsea 28

This matchup marked one of Calera’s two forfeit wins last year due to the Mustangs forfeiting because of COVID-19. Jackson-Olin, however, didn’t have a bad loss last season, falling to Pinson Valley, Gardendale and Minor in head-to-head games of a difficult region and losing two via forfeit. Calera seems to be on the rise in Class 6A after a few years of struggle, but there is still a lot to prove under a first-year head coach, while Jackson-Olin’s Tim Vakakes has competed against the best leading the Mustangs. The Eagles, however, showcased what is possible with a 26-22 win against Demopolis last week, which feels like a turning of the tide at Calera. That was so big for the team’s confidence, while it is tough to judge Jackon-Olin early in the season coming off a 55-0 win against Woodlawn in a game they should have dominated. This will be a tight battle, and could once again depend on how stars like Kobe Prentice and Kris Cotton play late in the game. Calera 21, Jackson-Olin 28

For the second week in a row, the Vincent Yellow Jackets will have a toss-up game against a 1A classification team that was forfeited a season ago due to COVID-19. The Jackets are 4-2 against Billingsley all-time, with one of those losses coming via the forfeit last year. If Vincent has truly turned the page this year and plans to be a threat in region play, which starts next week, this is a game they have to be dying to win. The determination and hunger should be at an all-time high to prove themselves, and that can be what makes the difference. The Jackets lost the opener 18-16, but showed fight for an entire game, while Billingsley won 13-0 in its opener. This one should be a tight battle, but I’ll ride with the local team in this one. Vincent 33, Billingsley 27

On paper, Banks Academy was a below-average team last year, but won against Cornerstone by a final of 46-6. The Chargers went on to pick up a win on the schedule due to an ineligible player, which sent Banks to a 1-9 overall season last year. This year, Cornerstone has to feel like this is a winnable game if they are improved at all, especially after a 20-0 win in week one, but a 40-point difference is difficult to make up in one year. Cornerstone 19, Banks 38

Coosa Valley seems to be headed in a new direction under Vince DiLorenzo, but the Rebels fell 55-0 in this game last year. Pickens finished the season 1-6 after a 4-0 start, however, while the Rebels will be improved this season. That’s not enough to make up the difference, but at least make Coosa Valley more competitive if this game is played after last week’s was forfeited. Coosa Valley 13, Pickens 35

It’s another week and another game against an out-of-state opponent for the Evangel Lightning. Early in the season, however, the Lightning have shown they can handle one of the best 8-man teams as well as an 11-man game. This week, they get a team that finished 2-8 last year. With a strong run game and a pass game that is emerging, Evangel should have no problems in this one. Evangel 42, Grace Baptist 20