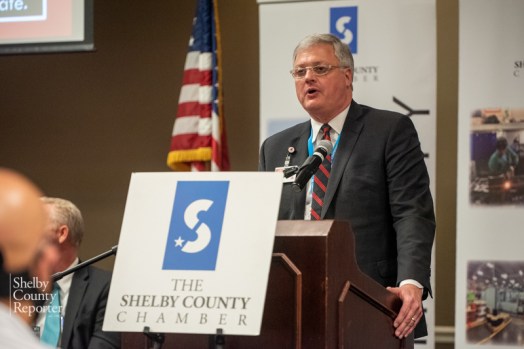 Alabaster City Schools Superintendent Dr. Wayne Vickers gives an update on the district during the luncheon. 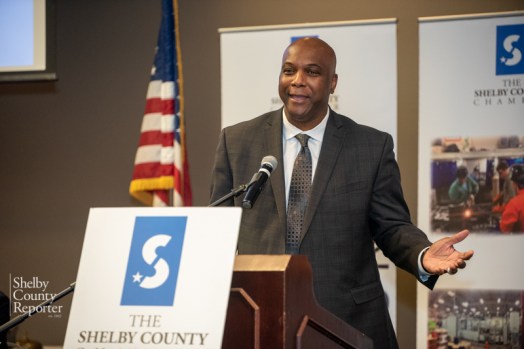 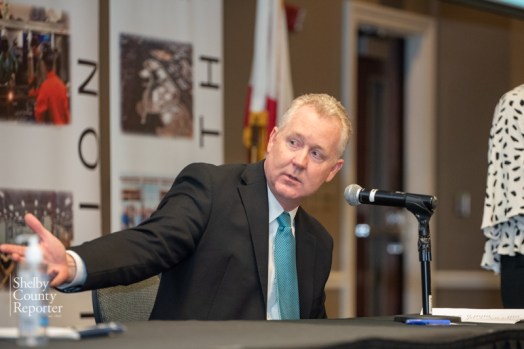 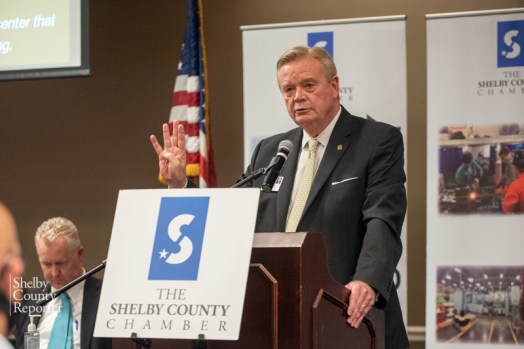 Dr. Dee Fowler, the new superintendent of Hoover City Schools, speaks at the State of Our Schools luncheon.

PELHAM – Superintendents from the four public school systems in Shelby County shared updates in local education at The Shelby County Chamber’s annual State of Our Schools luncheon on Wednesday, Aug. 25 at the Pelham Civic Complex.

Below are comments from each superintendent, listed in alphabetical order by school system.

Vickers provided a snapshot of the Alabaster City School System, which consists of five schools with student enrollment totaling 6,219.

“Over the past few years, we’ve had a 730-percent increase in the number of students participating in our Health Science Academy,” Vickers said. “At this time, we have over 400 high school students enrolled in some part of our Health Sciences program.”

Vickers described THS as the cornerstone of the district’s motto, “Champions of our future,” noting it houses 10 college and career academies, 12 CTE programs, honors and AP courses offered in all four subjects, 20 AP courses and 130 different electives.

“We’re very excited about that,” he said. “We want every child to walk across that stage for a diploma that means something, where they have a pathway to success after graduation.”

Vickers also provided an update on facility upgrades ACS has completed at each school campus, including a third gym at THS, gym renovations at Thompson Middle School and enhancements at Creek View Elementary, Meadow View Elementary and Thompson Intermediate schools.

The district’s student enrollment has reached 13,600, and the 2021 graduation rate was 94 percent.

As the school system continues its 30-day limited masking plan, Fowler said employees are working hard to maintain a safe and positive learning environment for students.

Coefield said Pelham City Schools has accomplished most of its five-year goals, including setting a solid foundation for finances and improving school facilities.

The district is looking to acquire property that could house a new school building in the future, he said.

“Another thing was the relationship with our city,” he said. “Our mayor and City Council have made a tremendous statement by signing a contract with us and making sure the 1-cent sales tax cannot ever be touched by the city government.”

Coefield said the district’s goals also included teaching students about accountability and developing a district-wide identity that was not limited to numbers and metrics.

The district’s student enrollment is currently 3,394, and the 2021 graduation rate was 93 percent.

On the latest Education Report Card, Pelham ranked in the Top 20 percent of all Alabama school systems and received a 97 in the indicator for academic growth.

“We’re very proud of the instruction that goes on in our buildings,” Brooks said. “We’re very proud of our teachers. We have launched a new strategic planning process, and we have a leadership team that’s working very hard and looking at what the next steps are for our school district moving forward.”

In February, SCS launched a $41 million campaign to complete capital improvement projects on school campuses throughout the district.

“Shelby County continues to grow,” Brooks said. “We have tremendous growth areas in Chelsea, Calera and Helena. We’re looking to make sure that we can accommodate that growth.”

The district’s student enrollment is currently 20,689, and the graduation rate is 95 percent.

During the question-and-answer portion of the discussion, Coefield talked about the pressure superintendents and district leaders have been under to make difficult decisions during the COVID-19 pandemic.

“Nobody up here is qualified to be a health officer,” he said. “In times of crisis, I think there needs to be some type of centralized command control. I hope when we get through this pandemic that our state leaders, before they’re introducing bills or passing bills, will think about getting in a room with the Department of Public Health, and the educational leaders and the governor.”

“We need direction, we need guidance, and we need to have something that we can all hang our hat on,” Fowler said.

A spirit of mutual support was evident among the four superintendents.

Vickers complimented Brooks, Fowler and Coefield on their leadership and said he enjoys working with them.

Fowler also praised Vickers, Brooks and Coefield for their work.

“Shelby County is very fortunate to have these three gentlemen as your superintendents,” Fowler said. “I’ve known them for a long time, and I would trust all three of these guys to lead the education strategies for my child.”

“We feel very strongly that not only at Shelby County Schools, but the districts you see here, there’s a great deal to offer for our students,” Brooks said. “We just appreciate you all as business leaders supporting what we do.”