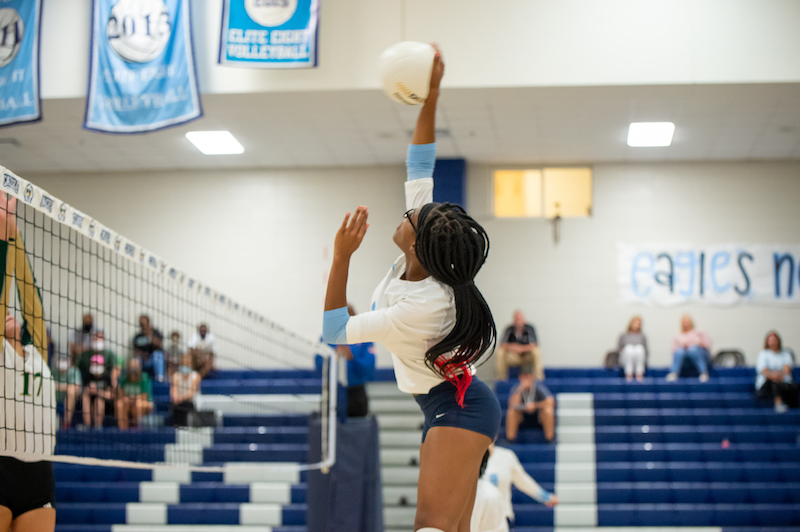 The Calera Eagles picked up a five-set win against rival Montevallo on Thursday, Aug. 26. (File)

MONTEVALLO – In a rivalry battle fit for Calera and Montevallo, the two teams put on a show on Thursday, Aug. 26 looking for an early momentum boost on the volleyball court.

In what was a tight first three sets that saw the Eagles take a 2-1 advantage, it was a thrilling third set that was the highlight and sent the match to a fifth-and-final set.

Calera was looking to close out the match with its lead, but the Bulldogs were fighting to stay alive, and they didn’t go down without a fight.

Montevallo put together several clutch points, which eventually led to a 25-25 tie. Needing to win by two, a back-and-forth set continued for the two teams with neither creating much headway.

But it ended up being the first team to 30 who got the advantage.

The Bulldogs eventually took a 30-29 lead, and with exhaustion setting in, they closed out set point for a 31-29 victory to even the match at 2-2.

That forced a fifth set to determine who would walk away as the winner of the rivalry battle.

Playing to 15 in the tiebreak set and needing to win by two, Calera was able to catch its breath and regain its composure to create an advantage.

The Eagles started strong enough and started to pull away late in the set to win 15-10 and bring an end to an exciting match with Calera winning 3-2.

The first three sets weren’t short on exciting moments either.

Montevallo actually struck first after sprinting out of the gate. The Bulldogs didn’t just play well early, the 4A Bulldogs dominated the 6A Eagles in the opening set after pulling away for a 25-14 win and a 1-0 lead.

Calera, however, settled in for the long haul and bounced back strong in the next two sets.

In a tight second set, the Eagles eventually created the separation they needed late to pick up a 25-22 win and even the match. They then followed that with more clutch play in the third set for a 25-21 victory to take the lead.

Montevallo didn’t roll over after losing momentum, and found a way to dig out the exciting fourth set to stay alive before Calera closed out the match.

Calera was led by Emma Harrison in a balanced attack with 14 kills, 10 aces and nine digs. Bria Caston also had a strong night, leading the team with 15 kills.

Bailey Hamrick, Johnson, Camille Holmes and Emily Gallagher all had eight or more digs in the match.