Calera falls to 1-1 with loss to Jackson-Olin 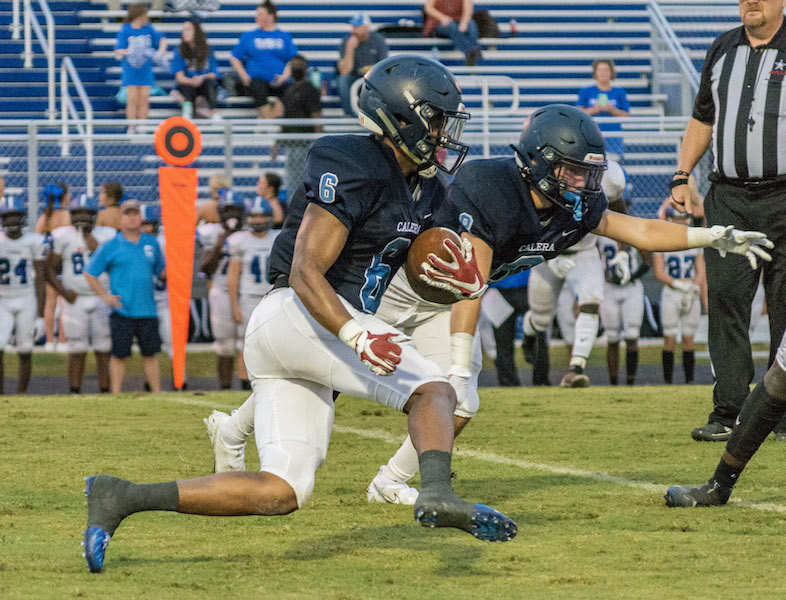 Calera fell to Jackson-Olin on the road in the second game of the season on Friday, Aug. 27. (File)

BIRMINGHAM — The Jackson-Olin football program is rolling after a strong performance against Calera, marching past the Eagles 38-13.  With the win the Mustangs advanced to a 2-0 record, while Calera is now 1-1 following last week’s opening win against Demopolis.

Jackson-Olin showed up in all aspects of the game against a very athletic Calera team.  The Mustangs had their way on the ground behind the efforts of senior running back Kason Hill. The Mustangs combined that with ferocious defense throughout.

The Eagles opened the game with a 72-yard kick return by Crimson Tide commit Kobe Prentice, but the play was overturned, which was a quick shift in momentum.

Defense shined in the first few drives until the Mustangs’ offense found their groove. Jackson-Olin put the first points on the scoreboard after Hill concluded a 57-yard drive with a 2-yard touchdown run.

The following possession, the Mustangs came out flying on defense, but Calera quarterback Preston Stokes still found Matthew Windham for a 60-yard touchdown pass, reclaiming the momentum of the game.

The Mustangs kept their composure and responded on the kick off with a 76-yard return from junior receiver Jerald Reynolds, giving his team outstanding field position at the Eagles’ 15-yard line.

Jackson-Olin took advantage of the great kick return by giving the ball to Hill, who took it 15 yards for the touchdown with 39 seconds left in the first quarter.

After a three-and-out by the Jackson-Olin defense on the following possession, the Mustangs capitalized with a 12-yard touchdown pass with 5:25 left in the half.

On the next possession, Calera was able to find Kobe Prentice for his first two catches of the game. That progress, however, was short lived as the Mustangs’ defense forced and recovered a fumble to place them on the 47-yard line.

With 3:47 left in the half, Jackson-Olin notched a 55-yard touchdown pass behind the big arm of Malek Lowe connecting with Amarion Brown in the end zone.

The Mustang defense continued to make its presence felt as they overwhelmed the Eagles’ offense with multiple plays for loss in a row.

Jackson-Olin drove down the field with a 32-yard dime pass in tight coverage to put the team in a good spot. Calera held strong as Wesley Head came up with an interception before the end of the half, but the Mustangs still took a 26-7 lead into the break.

In the second half, the Eagles came out ready to battle, forcing the Jackson-Olin offense off of the field with a major sack on third down.

Three plays into the offensive possession for Calera, however, the Mustangs responded with an interception that landed them on the Eagles’ 22-yard line.

In similar fashion to the first half, the Mustangs quickly took advantage of the opportunity on the very next play with a 22-yard touchdown run by Kason Jones with 5:32 left in the quarter.

Calera did get a 34-yard touchdown pass from Stokes to Prentice with 2:59 left to play, but it was too little too late at that point, as Jackson-Olin finished off the 38-13 win.