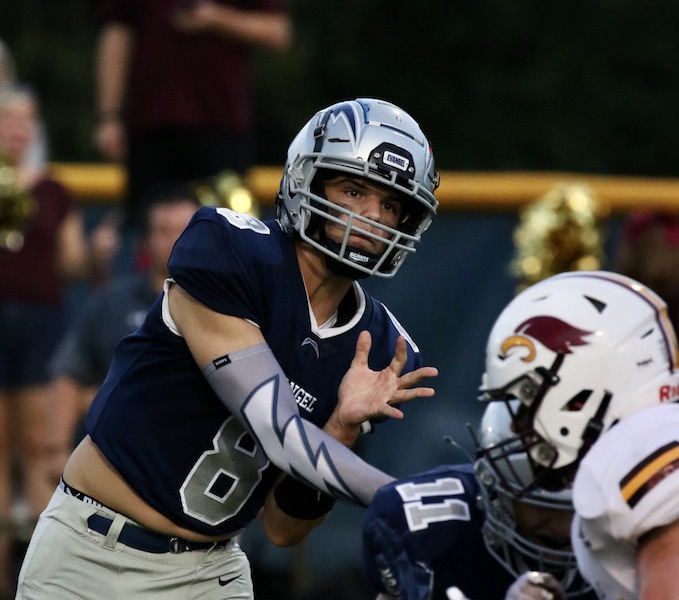 Evangel dropped a tough battle with Grace Baptist on Aug. 27, featuring two of the top 8-man teams in the country. (For the Reporter/Amy Barlow)

ALABASTER — Top-ranked Evangel Christian School was knocked off at home by No. 2 Grace Baptist Academy (Tenn.), 48-28, on Aug. 27 in the biggest 8-man game of the season to date.

Evangel led 28-26 at the half after a back-and-forth first-half battle, but Grace pulled away with three scores in the second half.

Eli Whitfield put Evangel on top to start the game with a 3-yard touchdown pass to Harris Black and then ran in the 2-point conversion. Grace scored twice to close out the first quarter with a 12-8 lead. It became 20-8 before Evangel answered with a 1-yard touchdown by Whitfield on a quarterback sneak to tie the game. Lucas Mast kicked the extra point to give the Lightning a one-point lead.

Both teams scored late in the final minutes of the half. Whitfield answered a Grace touchdown with a 6-yard run and Mast tacked on another PAT to lead 28-26.

After Grace regained the lead, 34-28, with a 10-yard touchdown run in the third quarter, Evangel scored on a reverse, but the play was blown dead by an inadvertent whistle.

Whitfield threw for 199 yards and touchdown on 19-of-43 passing, while adding two TDs on the ground.

Starting running back Tyler Wilson exited the game after only two carries, opening the door for Hunter Atkins to lead the ground game with 105 yards on 12 carries. Colton Burrough added 32 yards on six touches.

With Grace playing more than 100 snaps on offense, Evangel’s defense was led by Zach Cannon’s nine tackles and three sacks. Thomas Koch had seven stops, a sack and a blocked punt, while Hayden Black had eight tackles and a pass breakup.

Evangel (2-1) will remain home in Week 4 to host Southern Christian out of Opelika on Sept. 3.

Thompson pulls off consecutive shutouts for first time in…