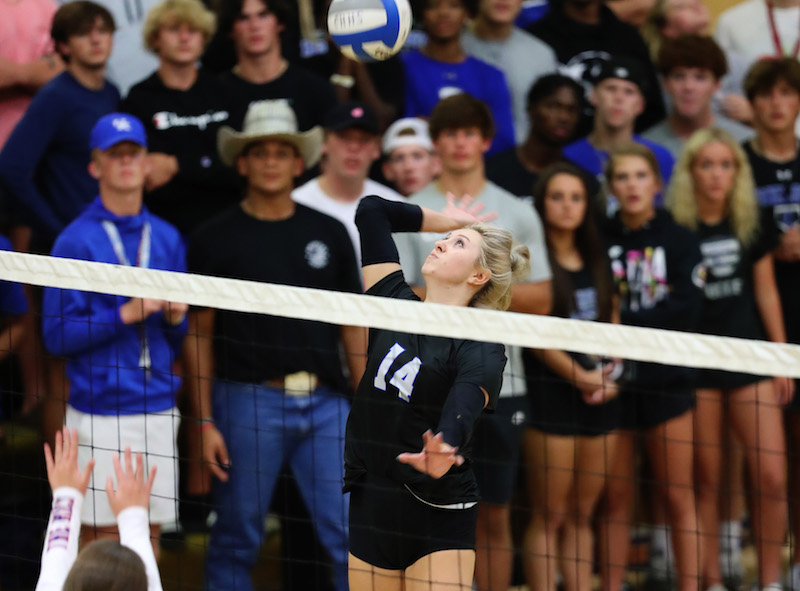 The Chelsea Hornets lost their first match of the season to Oak Mountain on Saturday, Aug. 28, but improved to 10-1 with three wins earlier that same day. (For the Reporter/Cari Dean)

The undefeated start may have ended against rival Oak Mountain on Saturday, Aug. 28, but that hasn’t diminished what the Chelsea Hornets have done through their first 11 matches of the 2021 volleyball season.

Following a 5-0 start with just one dropped set in that span, the Hornets continued an impressive start to the season on Thursday, Aug. 26 with a 3-1 victory against Helena before a weekend tournament at Briarwood.

The win against the Huskies, however, didn’t come without its share of challenges.

Helena actually led throughout the opening set and went on to take a 23-21 lead late in the set. Two points away from claiming the set, however, Chelsea was able to pull off the comeback against the Huskies for a 28-26 win to take a 1-0 lead in the match.

The Huskies, however, got redemption in the second set with a comeback of their own. In a tight battle, they came from behind to win the set 26-24 to even the match at 1-1.

But instead of leading 2-0, the Huskies were in a tie match, and the Hornets quickly shifted the momentum in their favor.

Chelsea jumped out to a lead in the third set and eventually went up by four at 22-18. The Hornets then won three of the next four points to win the set 25-19 and take a 2-1 lead in the match.

With Helena now needing to win the fourth set to stay alive, Chelsea took advantage of that pressure the Huskies were feeling and added to it with a strong finish.

With the win, Chelsea improved to 6-0 heading into an action-packed weekend of games.

The Hornets opened a weekend featuring five matches with a 2-1 win against Ramsay on Friday night, before then taking down Shades Valley 3-0 on Saturday morning, beating Helena 2-0 and downing Vestavia Hills 2-1.

Then came a battle against rival and Class 7A foe Oak Mountain.

Looking to finish off a perfect 4-0 Saturday and improve to 11-0 overall on the season, the Hornets got off to a strong start with a 25-19 win in the opening set.

That put the Eagles in a position of needing to win two sets in a row to take home a victory, and that’s exactly what they did.

Chelsea battled in the second set, but Oak Mountain took advantage of a swing in momentum to eventually claim a 25-19 set win.

Then, in the tiebreaker set, the Eagles put away the match by pulling away for a 15-6 set win and a 2-1 match victory.