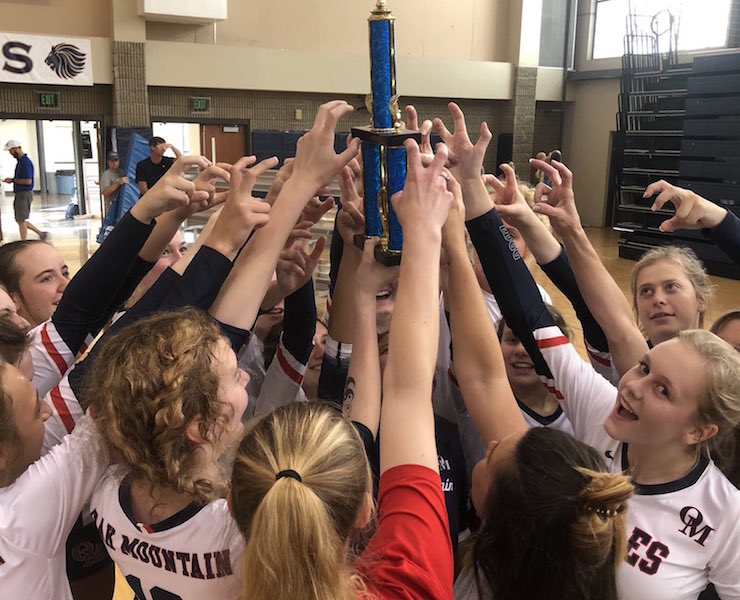 The Oak Mountain volleyball team hoists its championship trophy in the air after winning five matches in a row at the Warry Walker Serve Off to claim the title. (Contributed)

NORTH SHELBY – Following an up-and-down start to the 2021 volleyball season, the Oak Mountain Eagles responded in a big way between Friday, Aug. 27 and Saturday, Aug. 28.

Taking on some of the best talent from around the Birmingham-metro area and beyond, the Eagles found their groove and won five consecutive matches to claim the 2021 Barry Walker Serve Off Tournament hosted by Briarwood Christian School.

Oak Mountain started with three consecutive straight-set victories before beating host Briarwood in the semifinals and rival Chelsea in the championship match to claim the title.

In the opening match of the tournament on Aug. 27, the Eagles were able to pull off a 3-0 sweep against Westminster at Oak Mountain.

Taking on the Class 2A Knights in a battle of two schools separated by less than 2 miles, Oak Mountain put together one of its best efforts of the tournament.

The Eagles opened the match with a 25-10 victory to grab a quick 1-0 advantage, and while the second set was slightly closer, it was only by two points thanks to a 25-12 win.

Then, Oak Mountain closed out its only match of the night with an even more dominant third set, winning 25-7 to complete the sweep and leave a good taste in the team’s mouth heading into Saturday’s trek toward a championship.

The Eagles capitalized on that by coming back the next morning with three more impressive sets against Smiths Station, starting with a 25-10 win in the opening set. That was followed by wins of 25-16 and 25 -12 to close out yet another 3-0 sweep.

In the quarterfinals, Oak Mountain made quick work of Marbury with a 2-0 sweep to earn a spot in the semifinals against tournament host Briarwood.

The match began a two-match stretch in which the Eagles were tested but persevered to claim the championship.

Against the Lions, Oak Mountain couldn’t overcome a deficit in the opening set and eventually lost by six points, 25-19, to fall into a 1-0 hole.

It looked as if the tournament may come to an end for the Eagles a set later with Briarwood once again pushing the Eagles to the brink, but Oak Mountain dug deep and found a way to win clutch points late for a 28-26 set victory to force a tiebreaker set.

In the third-set tiebreaker, the Lions continued to be difficult to put away, but the Eagles eventually capitalized on the shift in momentum to end the second set and put the match away with a 15-11 set victory.

Now in the championship against 280-area rival Chelsea, Oak Mountain once again faced an early deficit after dropping the opening set 25-19.

Playing in their second 1-0 hole, however, the Eagles were able to go into the second set as comfortable as possible facing a deficit.

That paid off, as they went on to win the second set 25-19 to even the match, and then followed with an even more dominant third set with a 15-6 win to close out the championship.