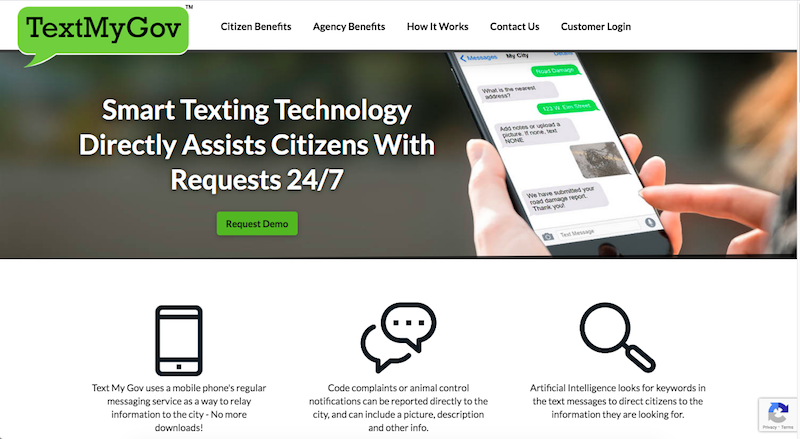 Montevallo leaders are looking at entering into an agreement with Text My Gov for smart texting technology services for the city and its citizens. (Contributed/TextMyGov.com)

MONTEVALLO – City leaders are considering purchasing smart texting technology services to provide another method of communication between citizens and the city.

Montevallo could enter into a two-year agreement with Text My Gov, a messaging system in which citizens can submit questions and requests to the city, and the city can send alerts and important updates to citizens quickly.

“This is something for the Council to take under advisement,” City Clerk and Treasurer Steve Gilbert said during the Montevallo City Council’s Aug. 23 meeting, and added the company would waive the setup fees of about $1,500, making the cost $3,800 annually. “Once the system is set up, the interaction from an individual is less. The system automatically sends out a response that we’ve programmed.”

For example, a citizen’s report of a stray dog somewhere in the city would be sent directly to the appropriate city employees via Text My Gov.

The system’s smart texting technology identifies keywords in citizens’ messages to instantly provide a response to the inquiry.

“It’s one dashboard, one system that manages all of the texting, all of the emails,” Gilbert said. “It takes a little bit of the human interaction that you have to do out of the picture initially.”

Other Alabama municipalities that utilize Text My Gov services include Gardendale, Mountain Brook and Jefferson County.

The city would receive a media kit and widget for its website from Text My Gov to let citizens know how they may utilize the system.

“It’s another method by which people can communicate with us,” Gilbert said. “It’s also an automated way to do some of that. It’s also a way for us to send out alerts and information.

“For example, once we get our storm shelter up, we can go through this system and set up a response that automatically sends out a message to anyone that has subscribed to the system that says, ‘Storm shelters are open at these locations currently,’” he said. “That, to me, is a point of value also, being able to push out information.”

Mayor Rusty Nix recommended the Council table the matter to give members more time to review the system and ask more questions.