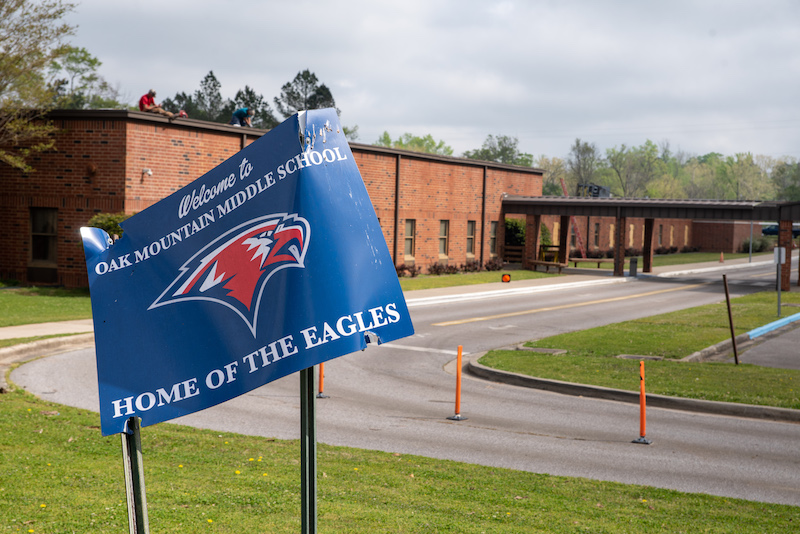 A construction bid has been approved for the final building repairs at Oak Mountain Middle School following an EF3 tornado earlier this year. (Reporter photo/Keith McCoy)

COLUMBIANA —  Shelby County Schools has approved a construction bid authorizing final building repairs at Oak Mountain Middle School in order to address lingering damage that was sustained during a tornado earlier this year.

The Board of Education approved the additional repairs during its monthly meeting on Thursday, Aug. 26. David Calhoun, the school district’s assistant superintendent of operation, is currently overseeing the construction project, and said the school district is making great progress in restoring the school to peak operations.

“All of this is related to Oak Mountain Middle School and specifically the storm damage that took place back in late March, and the majority of the items that are going to be addressed are going to deal with the roof and HVAC,” he said.

According to Calhoun, the biggest restorations consist of roof replacements on many of the school’s building structures, including addressing soft spots and repairing several HVAC units that were damaged during the storm.

During the storm’s immediate aftermath, Calhoun said the state initially allowed Shelby County Schools to forgo the repair bidding process in order to address any severe damage as well as restore vital facility functions. However, the repairs listed in the most recent construction bid were deemed more minor and therefore didn’t qualify under the state’s policy.

“They were items that weren’t deemed to be an immediate need, and so as a result, we have had to follow the state process for bids,” he said. “There’s no breach so water is not pouring in, but yet it still is an area that needs to be addressed.”

Although not urgent, Calhoun said the project does have priority given a new school year began in August and that more students now occupy the building on a daily basis.

Calhoun also added this is now the third phase of major repairs that has occurred since the EF3 tornado struck the school on March 25 of this year, with renovations taking place throughout March, June and now this fall.

During that time, the Hoover-based company Williford Orman Construction, LLC has overseen much of the repairs and has once again been contracted to facilitate the final restorations, which the district currently estimates at more than $871,000.

“We have a history of working with Williford Orman on other projects previous to now so there’s already a good working relationship,” Calhoun said.

Final restorations to the school are expected to be completed this fall.

A leader and friend: Dr. Kristi Sayers honored for…