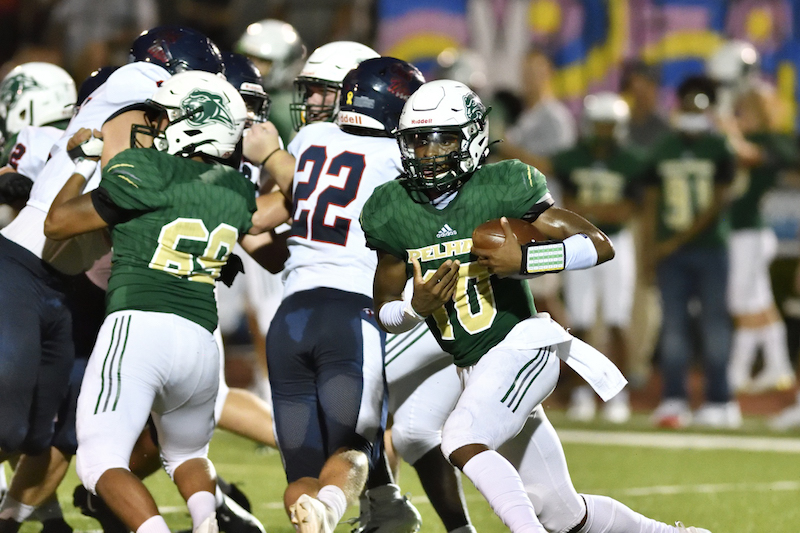 The Pelham Panthers will host Calera in a big county battle of 1-1 teams this Friday night to kick off region play. (For the Reporter/Barry Clemmons)

We are now heading into week three of the high school football season, which means region play is upon us. With six teams still undefeated at 2-0 and two weeks of strong play behind us, this is where we start to find out just what the potential of each team will be this season.

Pelham vs. Calera (Game of the Week)

This matchup has quickly become one of the more important this week. Both Calera and Pelham started the season with big wins with the Eagles beating Demopolis 26-22 for the first time in school history and the Panthers taking down Mortimer Jordan 42-6. Last week, however, each struggled with Pelham failing to convert on several opportunities early in a 21-0 loss to Oak Mountain and Calera falling to Jackson-Olin 38-13. Now, region play kicks off and Pelham is looking to defend its region championship, while Calera is hoping to make a push for a postseason spot this season. Pelham is still deep with talent this season, but the Panthers missed several opportunities early last week, before struggling to move the ball in the second half. Calera, on the other hand, has talent on both sides of the ball, but just seemed slightly outmatched from a depth standpoint last week against the Mustangs. That could be the difference again this week, as the Panthers have slightly more depth this season with so many returning starters. Their offense is way too good to get shutout this season, yet it happened last week. That should drive them going into this matchup. The Eagles, however, are tough to matchup with and won’t go down without a fight after losing last year’s game by just eight in a 49-41 battle. Pelham 35, Calera 21

It has been business as usual for the Thompson Warriors so far this season with two consecutive 55-0 wins. After taking down Oxford in week one, the Warriors followed suit in week two beating Sparkman by the same score. It gave the Warriors their first back-to-back shutouts in more than 40 years. Now, Thompson gets a Tuscaloosa County team that lost 35-10 to Class 6A Hillcrest-Tuscaloosa last week. The Warriors won this matchup 49-7 last year and are even more talented this season. With two consecutive shutouts and taking on a team that scored just 10 last week, don’t be surprised if Thompson pulls off a third straight shutout to start the season. Thompson 49, Tuscaloosa County 7

For the second year in a row, the Oak Mountain Eagles are 2-0 after wins against Chelsea and Pelham the first two weeks. The Eagles have done it this season in unusual fashion, outscoring their two opponents by a combined 54-6 in the second half. Now comes their first test against a Class 7A team that also sits at 2-0. Gadsden City enters with wins against Etowah and Fort Payne, winning 34-0 and 34-10, respectively. Last year, however, both teams entered this matchup winning the same two games, but Oak Mountain went on to win 38-23. The way the Eagles are closing games right now, they should have the edge again this week in what might be a tight game early. Oak Mountain 35, Gadsden City 21.

The Spain Park Jaguars will have to put last week’s 42-8 loss to Briarwood behind them, and they’ll have to do it in a hurry. There is no time to sulk with two of the best teams in the state on the schedule the next two weeks, starting this Friday with a trip to Hewitt-Trussville. Somehow, the Jags will have to completely flip a switch defensively after giving up 42 last week and more than 400 yards to the Lions with the Huskies entering off two consecutive wins to start the season in which they scored 49 and 41. That seems like a tall task, which means the offense churning clock and putting together long drives, while also converting, may be their best chance. The Huskies, however, are a top-five team for a reason. Spain Park 20, Hewitt-Trussville 42

Well, the Briarwood Lions have been as good as advertised early in the season after beating Madison Academy 41-17 and Spain Park 42-8 for a 2-0 start. Now, comes the rivalry matchup with county foe Chelsea to kick off region play for the two teams. The Hornets enter this game 0-2 with a 46-19 loss to Oak Mountain and a 27-14 loss to Helena. In each, however, Chelsea found success for a half. In the opening half against the Eagles, the Hornets played to a 13-13 tie at the half before giving up 33 unanswered in the third, then against Helena, they fell behind 20-0, but came within six late in the final quarter before questionable call kept them from taking the lead. Now, they get the No. 4 team in the classification and a rival all in the same week. The Hornets have a bitter taste in their mouth right now, and there isn’t a team out there they want to unleash it on than the Lions. Briarwood, however, has been so successful against two deep and competitive teams to start the season. Led by quarterback Christopher Vizzina and running back Luke Reebals, the offense is averaging 41.5 so far, while the defense is giving up 12.5. Chelsea isn’t going to go away quietly, but Briarwood has proven how talented of a team it already is. Briarwood 35, Chelsea 20

The Helena Huskies look to be on a mission this season, and they’ve checked one redemption win off their list already through the first two games with a 27-14 win against Chelsea last week. Now, they get a shot at another team they lost to by six or less in the first three weeks last year with a matchup against 1-1 Wetumpka this Friday. This will arguably be the toughest game to predict this week, but the one aspect that sticks out is offensive production. Helena is still trying to figure out a few things up front and in the run game, but talent is starting to separate itself. Mac Turner is off to a strong start at quarterback, JC Sivley is easily a standout receiver and Jordan Washington is coming along as a young running back. They have helped Helena score 55 and 27 in the first two games, while the defense has given up a combined 14 points so far. Wetumpka, on the other hand, has struggled offensively, scoring 13 and 18 in the first two games, while giving up 41 in the opener and 14 last week. Helena’s defense has been impressive, as it is every year, while the offense already looks to be getting better and better with more snaps. Helena 31, Wetumpka 24

Since losing four in a row to start last season, the Montevallo Bulldogs have reeled wins in nine of their last 10 games with the lone loss coming to last year’s Class 4A state champion. Now, they’ll get a crack at last year’s region champion in American Christian—a team that last in the semifinals of the playoffs. But, the Bulldogs may be getting them at the right time. Not only has Montevallo gotten off to a 2-0 start with wins of 30-13 and 41-24, but Joseph Anderson has quickly emerged as one of the state’s best running backs with 638 rushing yards through two games. Amercian Christian enters 1-1 with a 28-27 loss to Parker and a 34-20 win against Greensboro—two teams the Patriots handled with ease last year. Montevallo’s big question will become what happens when a defense finds a way to contain Anderson? Who is that next option? A good team that is well coached like American Christian will hone in on him, which means the Bulldogs have to have another option. Head coach Blake Boren has talent all across the team in his second year, and they have shown they can wear down teams early in the season. This would be a statement win that could determine the region champion, but since winning in 2016, Montevallo has lost four in a row to the Patriots. Montevallo 35, American Christian 42

After a two-point loss on paper to open the season, the Vincent Yellow Jackets missed out on several opportunities. That loss eventually became a win due to an ineligible player taking the field for Winterboro, and Vincent entered its second game ready to roll. This time around, there were no missed opportunities. The Jackets took down Billingsley 40-6 and looked good doing it. Now, sitting at 2-0, comes another good opportunity for Vincent against Ranburne to kick off region play. It marks the last of a three-game stretch the Yellow Jackets were forced to forfeit last year due to COVID-19 before playing in two games they won last year, making this one crucial when it comes to the postseason this year. Ranburne enters 1-1 with a 28-26 win against White Plains and a 21-14 loss to Wadley. The most impressive aspect of Vincent’s team has been the defense early in the season, giving up 18 and six in the first two games. Coming into the season, the Jackets had given up less than 20 points just three times in the last three seasons combined. That could be what makes the difference in a tight game between these two. Vincent 27, Ranburne 20

Following a 20-0 shutout to open the season, the Cornerstone Chargers fell short against Banks Academy 54-0 last week. This week, they’ll take on a Lakeside team that is beginning its season with the two looking to start region play with a win. Despite only three wins last year, Lakeside won this game 42-0 last year, which ultimately earned the Chiefs a spot in the playoffs. That’s a big gap to make up in one year. Cornerstone 13, Lakeside 33

Coosa Valley looked much better against Pickens Academy last week in a 35-14 loss than the Rebels did a season ago in a 55-0 loss. The game was actually a tight contest at the half, but stamina and depth ultimately made the difference. This week, however, they’ll take on Crenshaw Christian who won last year’s state championship. The Cougars won their opener 35-10 and forfeited last week. Should this week’s game be played, the Cougars will walk in off a 67-0 win last year. Coosa Valley 14, Crenshaw 35

After a 2-0 start, the Evangel Lightning came up short in game three against Grace Baptist Christian, who is now 3-0 on the season. The Lightning fell 48-28 after taking a 28-26 lead into the half. Now, they’ll look to bounce back against Southern Christian, and it should be a great opportunity for a bounce-back win with Southern losing 32-26 and 49-12 in the first two games. Evangel 49, Southern Christian 20