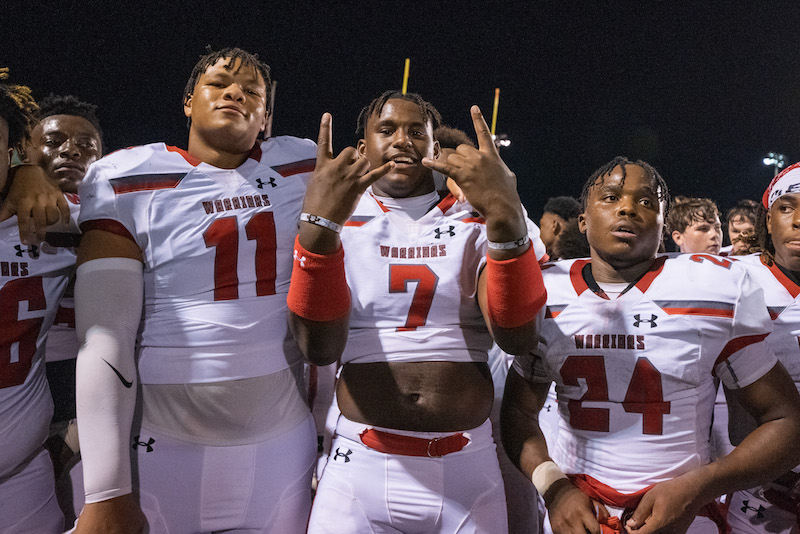 The Thompson Warriors posted their third consecutive shutout to start the 2021 football season, winning the first three games by a combined 168-0. (File)

TUSCALOOSA – The Thompson Warriors are in rare air. As a matter of fact, it’s debatable whether or not they’re already in a class of their own.

Another game came and went as the Warriors posted a third straight shutout and 50-plus point win as they went up 51-0 at halftime and cruised to a 58-0 win at Tuscaloosa County on Friday, Sept. 3.

The Thompson defense has allowed 152 yards in their first three games—combined. And two of those contests they allowed 27 yards or less—including this one.

The Warriors have now posted three shutouts in a row for the first time since 1972 and have outscored the first three opponents 168-0.

The defense forced a three-and-out on nearly every single first half drive, totaling nine tackles for loss as Tuscaloosa County went 0-for-10 on third down conversions in that same time span.

The one time they didn’t it was an interception by senior safety Karston Haywood.

The other side of the ball was a landslide for the Warriors as well, as they needed just 10 plays to score their first four touchdowns. Senior running back Brandon Franklin put together three runs for 54 yards, including a 14-yard scamper for the game’s first score.

The Warriors scored on the first play of their next two drives. The first being an electric 82-yard touchdown from Ryan Peppins, who took a screen pass, darted through a cut back lane and dusted the defense up the left sideline to go up 14-0.

Ahmari Bolden got in on the action next, as he busted through the line for a 53-yard touchdown on first down. Four offensive plays later, quarterback Conner Harrell found Peppins again, who hauled in an impressive over-the-shoulder catch blazing 68 yards for his second touchdown.

A couple of defenders scored next for Thompson. First, safety Kaleb Harris broke through the Wildcats’ punt formation and blocked the kick through the end zone for a safety and a 30-0 lead.

Next, Tre’Quon Fegans took the ensuing kickoff to the house 70 yards to put the Warriors up 37-0.

Thompson (3-0, 1-0) went to the ground game for the final two first-half touchdowns with the first being one of the most bizarre plays of the night.

Brandon Franklin rumbled around the left end for 7 yards before he was hit by a Wildcat defender jarring the ball loose, but tight end Jeffrey Kimochu caught the ball in stride and raced up the left side line the remaining 50 yards for his first career touchdown.

The Warriors capped off the first half with an eight-play, 50-yard drive where Ahmari Bolden added 30 yards on four runs, including a 4-yard touchdown—his second of the night.

Harrell completed four of his seven passes for 175 yards and two touchdowns. Both came courtesy of Peppins, who finished with three receptions for 168 yards.

Thompson’s run game was stout once again rushing for 248 yards on 32 attempts.

Bolden became the third different running back to lead the Warriors in rushing with a season-high 96 yards on just six runs with two touchdowns.

Franklin had a season-high 63 yards on seven rushes with a touchdown and senior Lione Cook finished things off with 63 yards on six runs adding the final touchdown of the night from 1 yard out.

Jax Van Zandt led the defense with six total tackles, including 1.5 for loss. Tyler Hicks added three more with two for loss. Nine different defenders recorded at least one tackle for loss as they held Tuscaloosa County to zero total yards on offense.

Thompson returns home next week to continue their region schedule and welcome to Spain Park Jaguars to Warrior Stadium Friday, Sept. 10 at 7 p.m.

Chubbfathers helping with hurricane relief project that will also…