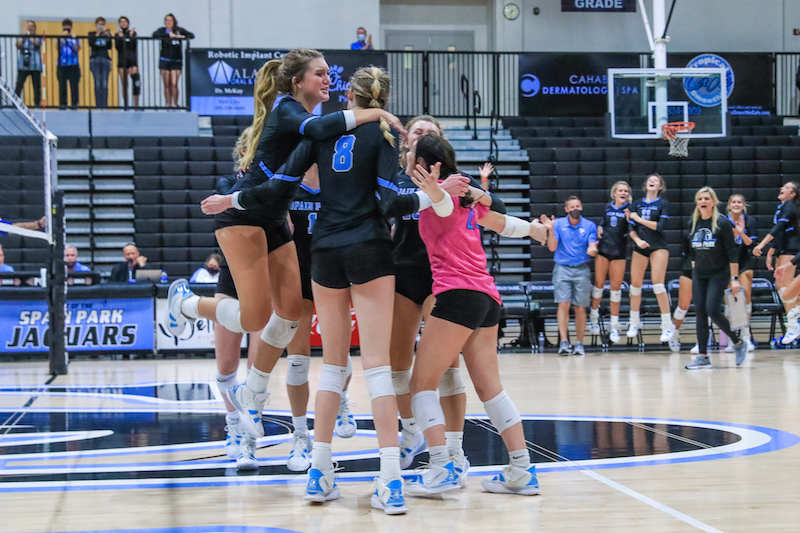 The Spain Park volleyball team faced its first adversity of the season with three losses at a national tournament, but the Jags picked up three wins as well. (File)

Smooth sailing for the first two weeks of the season, the Jaguars faced their first bit of adversity this season on Friday, Sept. 3.

Coming off their first dropped set of the season in a 3-1 rivalry win against defending state champion Hoover on Tuesday, the Jags were 14-0 overall heading into the Nike Tournament of Champions in Orlando.

But down three starters, Spain Park was finally forced to face something it hadn’t had to deal with so far this season.

Competing against some of the best teams in the country in the national tournament, the Jags dropped their first two matches with straight-set losses to Clearwater Central Catholic and DeLand—both florida schools.

They lost both sets to Clearwater by scores of 25-22, and then fell 25-19 and 25-15 to DeLand for their first two losses of the season in back-to-back matches.

Spain Park, however, bounced back in a big way.

The Jaguars finished out Friday night with a 2-1 win against Hagerty to gain back some momentum.

After dropping the opening set for their fifth consecutive set loss in a row, they bounced back with wins of 25-23 and 15-10 to get back in the win column going into Saturday.

The Jags carried that renewed confidence into Saturday, despite still missing key players.

In the opening matchup of Saturday, Spain Park fell behind 1-0 again with a 25-23 loss to Winter Springs in the first set. But the Jags bounced back with dominant wins of 25-12 and 15-6 to pick up another 2-1 win and stay alive in the bronze bracket.

That’s when the team’s confidence reached a peak in the tournament.

Taking on Bishop Kenny in the next match, the Jaguars picked up set wins of 25-14 and 25-17 to complete the sweep.

That put them in the championship match of the bronze bracket against in-state foe McGill-Toolen.

The three-match win streak came to an end in that matchup, as the Yellow Jackets picked up wins of 25-22 and 25-20 to complete the straight-set victory.

Down three starters, however, the Jaguars went 3-3 at the tournament featuring some of the best teams in the Southeast.

Following the week, including the 3-1 win against Hoover in a rematch of last year’s state championship, Audrey Rotham totaled 129 kills to lead the team, while Emily Breazeale added 70.

Breazeale also totaled 37 digs, while Rothman finished just behind with 34. The duo also combined for 24 aces and 11 blocks. Lilly Johnson led the team with 174 assists and added 23 digs, while Brooklyn Allison led the way with 63.