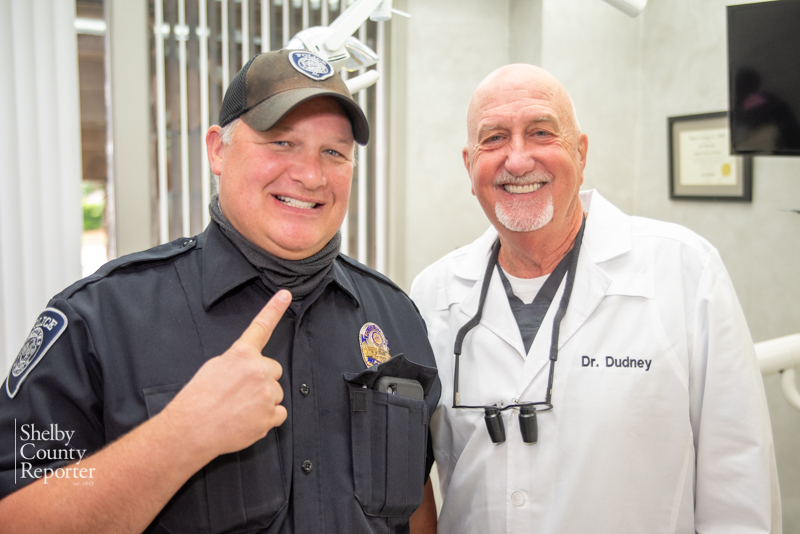 Officer James Chapman is the first to tell you he has never been much of a smiler. As an officer in the Pelham Police Department, he has always been described by others as quiet and humble.

With the help of Alabaster dentist Dr. Thomas Dudney, Chapman has a new smile to flash on the force. Chapman was chosen by Dudney to participate in the national Smiles for America program. The program chooses one dentist in every state to provide a free, new smile to a first responder of their choice, and was started as a way to honor the first responders who died on Sept. 11, 2001.

With the 20th anniversary of the tragedy fast approaching, a group of dentists throughout the United States wanted to find a way to thank the men and women who put their lives on the line every day.

Dudney has been providing top quality dental care to Shelby County residents (including Chapman) for years, and he said he was honored to be chosen to represent Alabama.

“When I got the call and they told me what they were doing, it’s one of those things where you hear it and go, ‘Wow, what a great idea. Why didn’t I think of that?’” he said.

Dudney said he wanted to take part in the Smiles for America program so he could help pay thanks to first responders whose job is often thankless. “You don’t see the heroic things these men and women do on a regular basis,” he said. “You don’t see them putting themselves on the line and working to help the people. You may see one nice thing on the news, but it’s not enough. It can often be a thankless job.

“We wanted to do something where we could say, ‘We’re not going to forget what you did that day, and that you never hesitated,’” Dudney added.  “They put their lives on the line, and they don’t even think about it.”

When he was set with the task of picking someone to receive the new smile, Dudney said Chapman was the natural choice. Chapman has served with the Pelham Police Department for 25 years, and Dudney said he has always been the best representative of the hard work police officers do.

“He’s what you want out there,” Dudney said. “James has been with the force for years, he has served with distinction, he’s someone people look up to, he represents the whole community.

“He’s never going to be one of these people getting in trouble for being too aggressive or using unnecessary force, which is something we definitely like about him,” Dudney continued.

Chapman said while he’s grateful for his new smile, “it’s kind of an odd feeling” receiving the smile in honor of the fallen first responders. “It’s a great feeling, now that it’s done. It was kind of difficult initially knowing what it was for,” he said. “I’m getting something fixed on me that needed to be fixed; meanwhile, they gave their lives. I can’t put it into words.”

“I feel like there are more people out there who have sacrificed more than I have,” Chapman continued. “I’m so grateful for it, but it’s a weird feeling. When they first approached me about it, it caught me off guard.”

Trusting Dudney with his new smile, was the easiest part, said Chapman. “I put it in their hands completely,” Chapman said. “I trust him completely.”

Chapman said he has always taken good care of his teeth, but there was “excessive wear” that he said needed attention.

“He had some wear from acid erosion and that was going to get worse with time,” said Dudney. “We felt this would be a good opportunity because he didn’t neglect his teeth or do anything to get his teeth in bad shape. It’s just there was some damage due to acid erosion, and it was just going to continue to get worse.”

Ten porcelain veneers were placed in Chapman’s mouth, something insurance would ultimately not cover.

“We wanted to do something permanent for him,” Dudney said. “When you have wear on multiple teeth like James did, it can impact the appearance of the teeth and damage the internal structure of the teeth.”

“It’s a great feeling,” Chapman said. “Not that I’ve had too many new cars in my life, but it feels like having a new car. You know, you want to take it easy, and you don’t want to scratch it up.”

Dudney said watching people gain a new sense of self is a wonderful feeling. “It’s a very rewarding thing to give someone a smile and have them say, ‘For the first time in my life, I don’t mind smiling for my picture. I have confidence now. This changed my life.’ Those are all important things, and a smile is a universal language,” he said.

Chapman said he can already feel a difference. “I’ll probably smile more now than I have even since I was a kid,” he said, smiling.