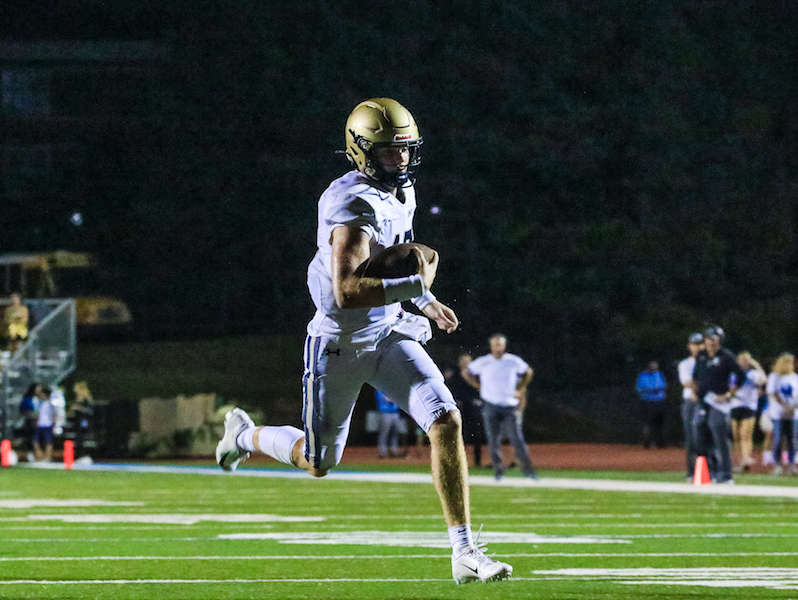 Briarwood's Christopher Vizzina had one rushing touchdown and three passing touchdowns to lift the Lions to a 42-21 region win against Woodlawn. (For the Reporter/Dawn Harrison)

BIRMINGHAM – A week after their nail-biting come-from-behind victory against rival Chelsea, the Briarwood Lions didn’t take any chances on Thursday, Sept. 9 in a region matchup with Woodlawn.

Christopher Vizzina continued a special season with a monster night of offense to help lift the Lions to a 42-21 victory against the Colonels to improve to 4-0 (2-0) on the season.

Down star running back Luke Reebals, not only did Vizzina step up with four total touchdowns, but Cooper Higgins had a breakout night with three touchdowns.

It didn’t take long for that duo to strike either.

On their opening drive of the game, the Lions quickly found the end zone when Vizzina hit Higgins for a 30-yard touchdown to put them on top 7-0 in the first three minutes of action.

Briarwood quickly made it 14-unanswered in the first six minutes when Riley Margene toted in a short run on the Lions’ next drive to take a two-score lead midway through the opening quarter.

The fast start, however, quickly fizzled, and the 1-2 Colonels started to make the Lions sweat going into the half.

Woodlawn got good field position on the ensuing drive, which the Colonels capitalized on with a touchdown to cut the Briarwood lead to 14-7 just 1:30 later.

That shifted momentum in first quarter, as Woodlawn picked up some much-needed confidence.

The Colonels put together a strong stretch of defensive play to end the quarter, which gave them the ball with a chance to tie.

But Briarwood’s defense quickly became too much, which led to offensive chances.

Going into the second quarter, a Peyton Steed interception put the Lions back in business.

The quickly capitalized when Vizzina hit top target Jay Butler for a 59-yard touchdown pass to put the Lions up 21-7 30 seconds into the second quarter.

That became the shift that gave Briarwood the lift it needed to start to pull away.

The defense got another takeaway shortly after on a recovered fumble, which led to a short touchdown run from Vizzina for his third touchdown of the first half.

Up 28-7 with just more than six minutes to play in the second quarter, Briarwood got the ball back one more time before the break and put together another nice drive.

This time, Higgins carried the ball into the end zone from inside the 10-yard line to make it 35-7, which became the halftime score.

Coming out of the break, Vizzina and Higgins picked up right where they left off.

Midway through the third quarter, Vizzina hit Higgins on a short pass that went for more than 60 yards and a touchdown to put Briarwood on top 42-7.

At that point, the damage was done.

The Lions gave up two touchdowns in the final six minutes with the team working on depth, creating the final score of 42-21.

Vizzina finished the game 13-of-17 passing for 278 yards and three touchdowns passing, while he added 12 more yards and an additional touchdown on the ground.

Steed, Ethan Anderson and Will Clark all had interceptions for the defense, while Aidan Punch was 5-5 on extr points.

With the win, No. 4 Briarwood became the first team in Class 6A, Region 5 with four wins this season, while the Lions are also leading the pack at 2-0.