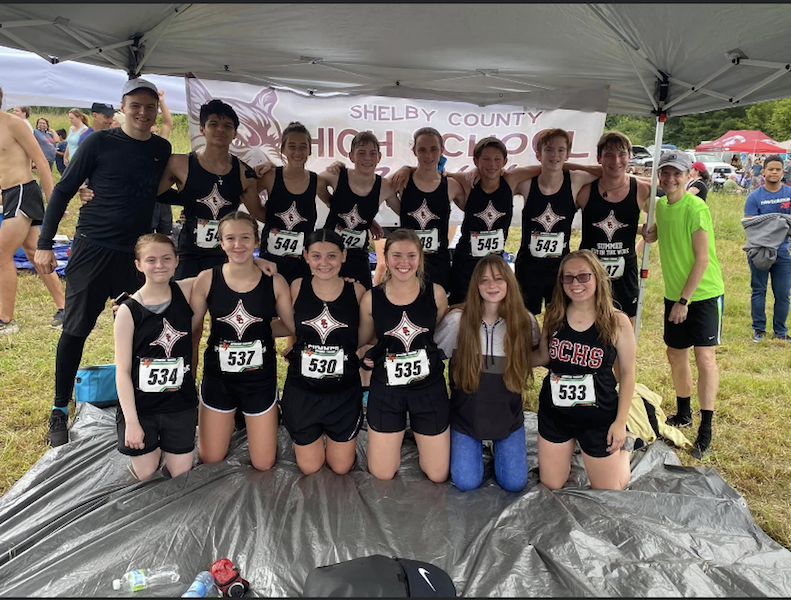 Members of the Shelby County High School cross country team are hopeful to clean up their cross country course to host events following a hurricane and tornado in the last year. (Contributed)

This may be the year the Shelby County High School cross country team really gets to shine. The fledgling team has fought to grow, and this year they boast 19 team members from both middle and high school. The team spent their first full summer working out together. From Memorial Day on, they’ve been running together regularly, and that effort is beginning to pay off for them.

At their first meet of the school year in St. Clair County, sporting their first team shirts, the runners also had their first real win.

“My goal was to have them come in under 28 minutes, and they came in at 25.42 minutes winning over Leeds, which was very impressive,” head coach Jason Mayfield said. “It was really great to see them realize a win after all the work they put in this summer.”

The team has had a few setbacks to success in the last year, though. The biggest was the maintenance of the cross country trail after two major storms in the last year. The trail that runs across 15 acres behind Elvin Hill Elementary in Columbiana is just over a mile long. The creation of the trail took many groups working together to bring to fruition, and the team looked forward to eventually hosting their own invitationals in order to fund their program.

The hurricane last October, however, became a huge setback when the loss of trees throughout the Columbiana area shut down parts of the town for days due to power outages.

It took time to get the town up and running again, and eventually, the team, with a lot of help, was able to clear the track to run again.

The team was once again frustrated, as was the town, by the March 25 tornado that left the town scrambling to clean up infrastructure and bring power back online.

The track was eventually cleared enough to run, but it is still covered with broken trees and fallen branches.

A thorough clean-up has to be executed to make the track viable for the team to use for invitationals, which will bring the team some financial benefits and allow it to grow in many ways.

A few parents of the team have organized a clean-up day for the trail, and they invite the entire community to come out and support this hard-working team with their time and tools. Individuals with ATVs and small trailers would especially be welcome due to the location of the trail. Bring work gloves, chainsaws, wood chippers, loppers, rakes, weed eaters, and most of all, a winning spirit Saturday, Sept. 11 at 7 a.m. The trail is located in the wooded area behind the walking track at Elvin Hill Elementary School. Any questions can be directed to Julie Horton at Julie.ahplumbing@gmail.com.