ALABASTER – Throughout the week, members of the Alabaster community have been busy donating hundreds of care bags to area hospitals as a show of solidarity to the doctors and nurses on the frontlines of the COVID-19 pandemic.

Creekview Elementary School teacher Ashlee Elliott, who is leading the initiative, said the act of kindness was inspired following a conversation with a Grandview COVID ICU nurse during a recent pedicure at a local nail salon.

“I saw she was wearing an N-95 mask, and I was wondering how she liked hers as I had recently ordered some myself,” Elliott said. “And I’m the kind of person where I don’t really meet a stranger, so we started talking through the rest of the pedicure. I heard of the firsthand experience of what she was dealing with every single day, and it just really touched my soul.”

Throughout the conversation, Elliott learned of the dire situations many local hospitals are currently facing, as COVID-19 hospitalizations continue to rise from the delta variant.

“She has like two to three people die on her floor every single day. So when she goes to work, it’s just morbid. I mean, it’s every day. Her actual words were ‘it is like a warzone’,” Elliott said. “I think that people have forgotten that, because they’re not in it firsthand, and it’s hard for us to really understand what it must be like.”

According to Elliott, nurses and doctors are often working multi-day shifts as they attempt to treat multiple patients simultaneously. 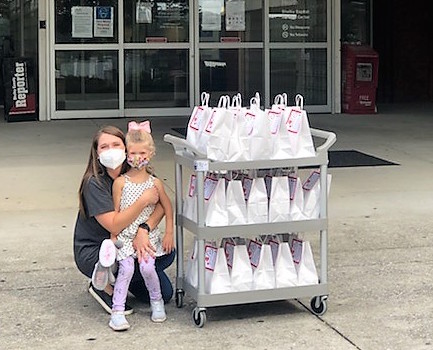 Feeling such compassion, Elliott said she rallied her third grade class and others in the Alabaster community in order to provide some encouragement. As a former Miss Shelby County, community service has always been close to Elliott’s heart.

“I have always had a heart for service and community, and that’s where it really began,” she said. “So I am always finding ways to get involved and give back to the community.”

Since Monday, Sept. 6, Elliott and her team assembled more than 130 care bags for various hospitals, with 50 bags arriving at Shelby Baptist Medical Center on Thursday, Sept. 9.

Each bag contains a variety of items including bottles of Starbucks coffee as well as several pre-packaged snacks, which Elliott said many of the nurses and doctors had specifically requested due to the nature of their jobs.

“Oftentimes, they hardly have a chance to eat during a 12-hour shift, so just having a snack in their pocket is very helpful because sometimes they just don’t have that kind of thing on hand,” she said.

In addition to refreshments, everyday supplies such as lotion, hand sanitizer and bath Epsom salts are also present in the gift bags.

The bags are being organized at Elliott’s home, which over the past week has been converted into a makeshift workshop. As word spreads of the project, Elliott said donations have flooded her house, and she has even been able to raise several hundred dollars for local hospitals.

“We are putting the bags together at my home, so it has really been a family effort,” she said. “But the response from the community has also just been unbelievable. This has really touched my family.”

However, Elliott said the most poignant moment occurs once the bags arrive at the hospital.

“Many were crying and laughing, which really hadn’t been seen a lot over the past year. Everyone, for just a moment, forgot all the bad and were just really touched by this act of kindness,” Elliott said. “That’s all I want, just to bring one smile or bring a bright light to someone’s day, and I feel like that is what we have to do when we deliver these bags.”

As a teacher, Elliott was also able to incorporate her third graders into this service project by asking them to write thank you notes to the doctors and nurses. Her 3-year-old daughter, Lana, even joined in to assist her mom in wrapping the care packages and preparing them for delivery.

“It was a great opportunity for our students, and a chance for us to teach compassion and empathy, and sometimes those are the lessons that mean more than the academic ones,” she said. “And I think the kids, as by their letters, did really understand what they were writing about. They were so heartfelt.”

Elliott’s good deed has not gone unnoticed either, as the staff of Shelby Baptist expressed their gratitude to her and other community members for the gesture.

“We are thankful to Ashlee and her daughter as well as local community members for the care packages we received. This donation is an act of kindness that will surely encourage many of our staff members, who work every day to care for our patients,” CEO Daniel Listi said.

Similar initiatives have now popped up across the state, with several other communities currently planning to do the service project for their area hospitals.

“It has really started a chain reaction, and I’m so grateful to just be a part of that and to just get the word out and try to get the public’s attention so that other people can start these projects in their own area,” Elliott said.

Thompson High School, as well as several communities in Gulf Shores, most recently joined the effort.

Elliott said she only hopes to see the campaign continue to grow and help bring a small token of joy to every healthcare worker in Alabama.

“Being a strong person of faith, I really believe God puts people in your path for a reason,” she said. “With this project, I had to listen and obey to what God was calling me to do. I learned that it is only after we act on what God places on our heart that the world can feel the effect of what it is God needed us to do.”