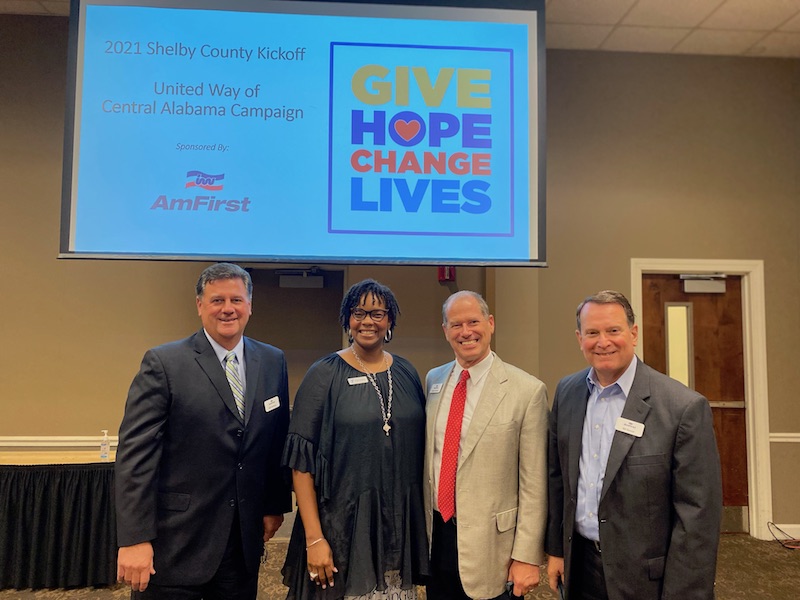 PELHAM – The Shelby County chapter of United Way of Central Alabama hosted its campaign kickoff at the Pelham Civic Complex on Thursday, Sept. 9.

This year’s theme for the campaign is to “Give Hope, Change Lives,” and various representatives and donors of the organization filed in to celebrate the work United Way has accomplished in the past year. Agencies present included the Arc of Shelby County, Family Connection, and the YMCA of Pelham, Greystone and Alabaster.

UWCA Campaign Chair Doug Coltharp live-streamed a special message from UWCA headquarters, saying it was an honor and a privilege to serve as the campaign chair for the UWCA.

“We have a great tradition in the Birmingham community of lifting up lives to unparalleled support of philanthropic and civic organizations, and UWCA is positioned at the forefront of delivering on that mission,” he said. “The definition of hope is the expectation that things will be better tomorrow. I ask you to give hope and change lives by donating generously to the United Way of Central Alabama.”

Special guest speakers included Shelby County’s UWCA Campaign Chair Chance Hallmark; Mike Northrup, of America’s First Credit Union; and Terri Harvill, the district vice president of the YMCA of Greater Birmingham. All three speakers spoke of the important role UWCA plays in the community, and how grateful they are the organization exists.

“I give because I love Birmingham and I love the metro area,” said Hallmark. “I want to see people in our community do well. The Birmingham area is number one in the nation for individual givers, and I think that needs to be talked about more.”

Northrup, who has donated to United Way for more than 30 years, said he and his wife believe in the hard work of United Way, and always encourage everyone to donate.

“United Way does help needy people, but it also helps people in need. You never know when you’re going to be in need,” he said.  “If you’ve ever been served by Children’s of Alabama, the Boy Scouts, Girl Scouts, the YMCA, you’re probably not a needy person, but they met a need that you have.”

“Here in Shelby County, the YMCA has been doing good work for the community for a long time,” said Harvill. “When we talk about giving hope and changing lives, what we’re really talking about is addressing issues and responding to issues.”

Harvill said donations to United Way are responsible for programs like the YMCA’s Kindergarten Readiness Program, which equips children with literacy, math skills and even English lessons to better prepare them for English-speaking classrooms. “That program was started over 10 years ago, and it’s still going on today,” she said. “It’s not just for children who need to learn English; it’s for all children ages 3-5 years old.

“By giving to United Way,” Harvill said, “You are assuring that whatever the community needs will be there.”