Calera has special night in 21-0 shutout against Chilton County 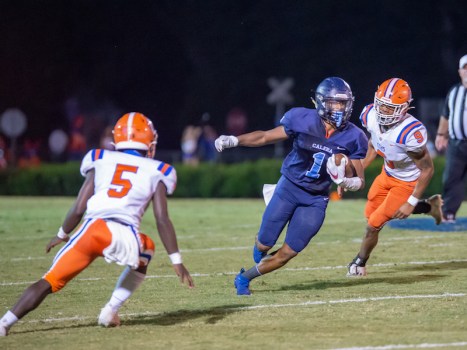 Kobe Prentice, No. 1, scored two touchdowns for Calera in the Eagles' 21-0 shutout victory against Chilton County on Friday, Sept. 10. (For the Reporter/Larry Dancy) 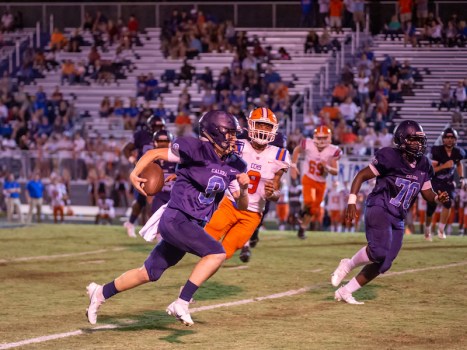 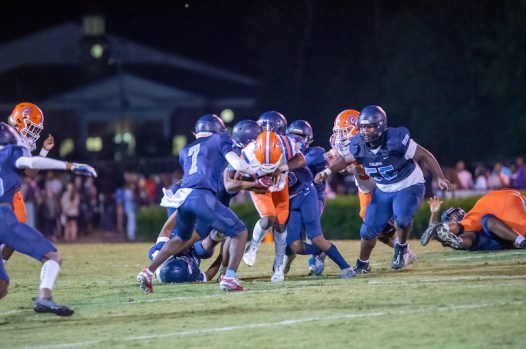 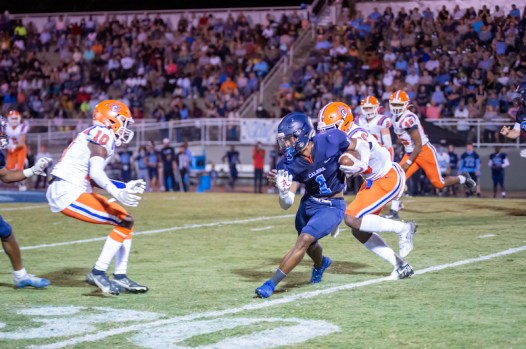 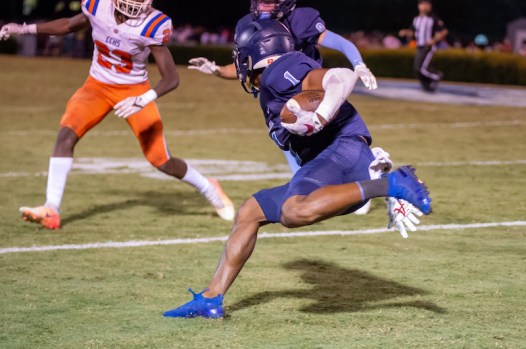 CALERA – The Calera Eagles improved to 2-2 Friday night, Sept. 10 as they shut out the Chilton County Tigers in a hard-fought home victory, 21-0.

The win gave the Eagles some much-needed momentum following a four-point loss to Pelham the previous week, and the points were earned in a defensive battle that didn’t see the Eagles pull away until near the end of the third quarter.

“Chilton County had a great game plan,” Calera head coach Jason Hamlin said after the win. “They kind of stumbled us a little bit. That first play we came out really hot, and then Chilton County kind of raised up. They were able to limit K.P.’s (Kobe Prentice’s) touches, his catches, they bracketed him up really well so we had to make some adjustments at halftime to put us in a little bit better situation, but hats off to them. They played a great game.”

Hamlin also credited the defensive line and the team’s running backs after running back Chris Cotton had to come out with an ankle injury early in the game.

“Our young running backs did a great job when we lost Cotton,” he said. “We were able to just continue to run the ball in that second half when we were kind of questioning, ‘What are we going to do?’ Because our top running back was out.”

Calera’s first points came on a 45-yard touchdown passing play from Preston Stokes to Kobe Prentice. On their next drive, the Eagles pushed the ball down to the Chilton County 1-yard line but were denied thanks to a Chilton County interception. The Tigers were not able to capitalize on the offensive side of things, however.

In the second quarter, Calera missed a field goal attempt but again took over the ball on downs. However, they were not able to capitalize on the opportunity, and the score stood at 7-0 at halftime.

It was with 3:05 in the third quarter that Stokes found Prentice again for a 28-yard touchdown play to double the Eagles’ lead. Then, halfway into the fourth, Calera’s Jaylon Pearson recovered a CCHS fumble to pave the way for running back Amari Brundidge to score from 13 yards out with 2:42 left to play.

The ensuing PAT became the final point of the game, putting Calera safely ahead for a 21-0 victory.

Calera was led by Stokes with a 16-for-22 performance featuring 250 yards and two touchdowns with one interception. Prentice remained a top target with six receptions for 86 yards and two touchdowns, while Braylynn Farrington went for more than 100 yards for the second week in a row with seven catches for 105 yards. Brundidge finished with 10 rushes for 74 yards and a touchdown.

Calera has now won two head-to-head games in the same season for the first time since joining the 6A classification.