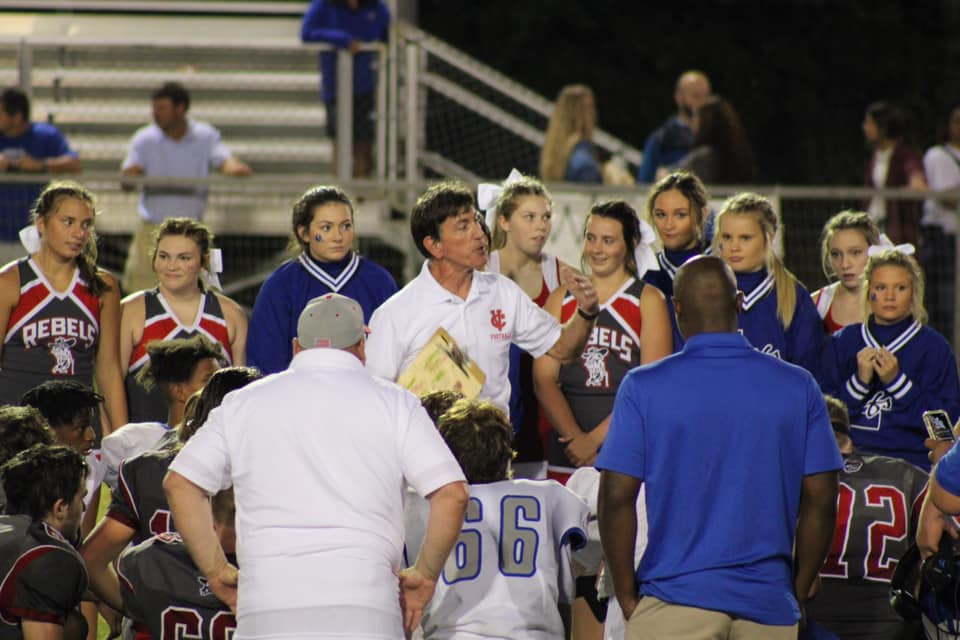 Coosa Valley head coach Vince DiLorenzo talks with his team after their win against Lakeside on Sept. 10. (Contributed)

HARPERSVILLE – Coosa Valley Academy picked up its first home region win of the season Sept. 10, defeating Lakeside School 26-14 to snap an 18-game losing streak that dated back to Oct. 26, 2018.

“It was the first win Coosa Valley has had in a long time. It was nice to see the parents and the community celebrate after the game. It was a long time coming and I appreciate the confidence Pam Lovelady showed in hiring back,” said Vince DiLorenzo, who returned to CVA as head coach this season.

Lakeside took a 14-6 lead in the first half with penalties taking points off the scoreboard for Coosa Valley, but the Rebels scored 20 unanswered points in the second half.

“We really shot ourselves in the foot in the first half with a lot of penalties we shouldn’t have had that were correctly called,” DiLorenzo said. “We had people out and were very, very thin. We challenged the guys at halftime to either bow up and show they had what it took or be what they’d been in the past. The players really decided they would not let the past affect their future and did what it took and got a victory.”

While Hunter Hill scored in the first half for CVA, Conner Hebson and Ray Albright opened the scoring in the second half, with Albright scoring on a more than 20-yard pass reception to give the Rebels the lead for good.

Weston Dooley intercepted two passes, including a pick six called back in the first half.

Evangel rolls past North River for 4th win of…