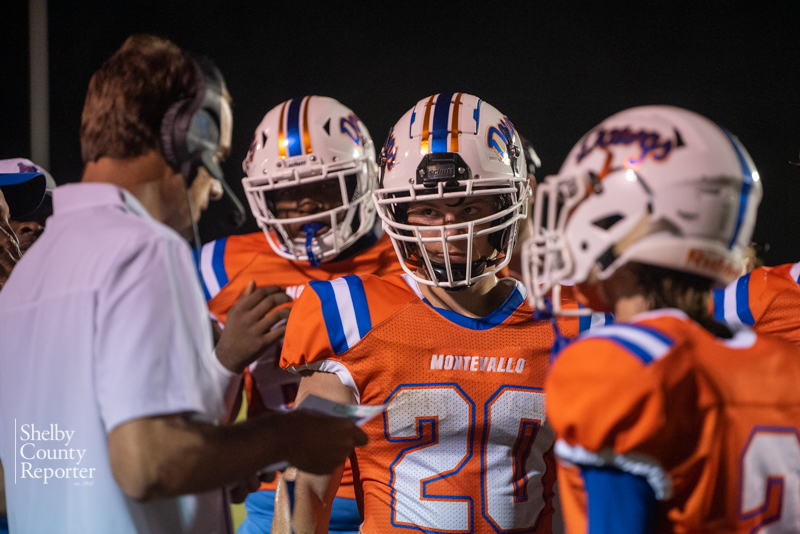 CENTREVILLE – Bibb County scored a crucial touchdown on a fourth-and-goal play with 13 seconds remaining in the third quarter of Friday’s game against Montevallo and pulled away for a 35-13 win.

The Choctaws scored first, in the first quarter, but Montevallo answered with a 35-yard score that made it 7-6.

Bibb added another touchdown to make it 14-6 at halftime, and then increased its lead to 21-6 on a 12-yard touchdown run with 9:32 on the clock in the third quarter.

The Bulldogs perhaps still had a chance if they could have stopped Bibb County on the fourth down play as the third quarter came to an end, but the pivotal play went in the Choctaws’ favor.

Still, MHS pulled back to within two scores of the lead with a touchdown with 8:48 to go in the fourth quarter, but Bibb County put the game away with a 30-yard TD run with about 5 minutes remaining.

His favorite targets were Javon Rogers and Joseph Anderson, who had four catches for 17 yards and three catches for 43 yards, respectively.

Anderson also had a receiving touchdown, as did Tamardrean Purnell. Anderson carried the ball 14 times for 72 yards.

Cole Dennis led the MHS defense with 13 tackles, while Jamion Prentice had nine tackles, and Cottingham had eight tackles and an interception.

The Bulldogs visit Wilcox Central on Sept. 17 for another region tilt before a mid-season bye week.