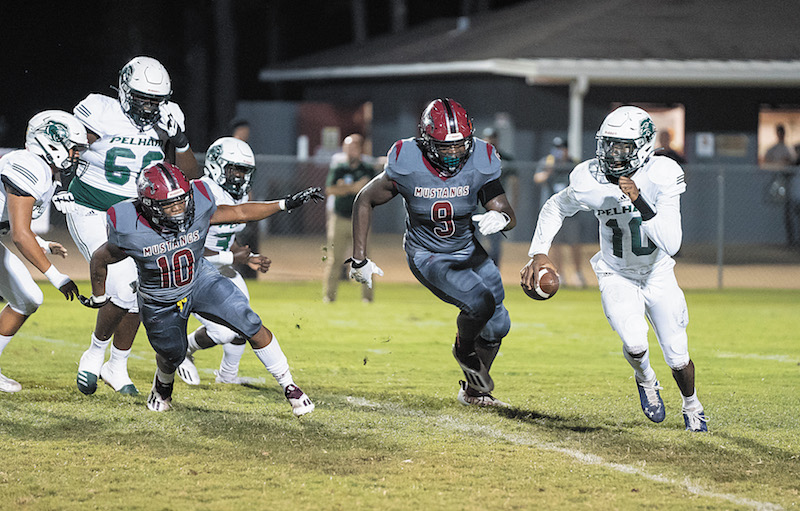 The Pelham Panthers overcame a 7-0 halftime deficit against Stanhope Elmore on Friday night to pick up a 14-13 win and improve to 3-1 on the season. (Alex City Outlook Photo)

MILLBROOK – The cardiac cats were up to their usual mischief on Friday night, Sept. 10, as the Pelham Panthers followed up last week’s 34-30 comeback win against Calera with another down-to-the-wire finish against Stanhope Elmore.

Trailing 7-0 at the half, Pelham scored 14 in a row in the second half to take a 14-7 lead going into the final quarter.

The Mustangs finally overcame the shift in momentum with 7:04 to play in the fourth quarter with a touchdown to get within a point, but a missed extra point became the story of the night.

Pelham went three-and-out on its next possession, but the Panthers then followed with a big interception from Corey Perkins to get the ball back with 2:41 to play.

But after failing to convert on fourth-and-3 with 40 seconds to play, Stanhope got the ball back with one more chance.

Shortly after, the Mustangs drew up the famed hook-and-ladder on their final play, and it worked to perfection.

Stanhope completed the pass and seemed destined for the game-winning touchdown with a receiver trying to beat the Pelham defense to the end zone, but Jamal Miles, who started the play on the opposite end of the field, chased down the ball carrier in a full-on sprint and tackled him inside the 5-yard line as time expired to preserve the 14-13 victory.

With the one-point victory, Pelham improved to 3-1 on the season and 2-0 in region play.

The Panthers have also put together two consecutive comebacks in impressive fashion, outscoring Calera and Stanhope by a combined 41-16 in the second half the last two weeks for two crucial area wins.

With a slow start offensively, the defense kept the Panthers in the game the game during the first half, and they quickly gave the team a chance in the second half as well with a quick stop.

Finally, Pelham capitalized offensively. The Panthers scored midway through the third and then in the first minute of the second half to grab the lead.

Gabe Gamble carried in one of the two touchdowns as part of his 108-yard night running the football, while Darius Copeland added the other as part of his three receptions for 24 yards.

After the two teams traded fumbles, Stanhope scored what looked to be a game-tying touchdown with 7:04 to play, but the missed PAT is ultimately what became the difference in the one-point game.

The Mustangs had chances the rest of the way, but Pelham found ways to make big plays when they were needed.

In addition to Gamble and Copeland, Will Lankford finished with 58 rushing yards and 31 passing yards at the quarterback position with one touchdown.

The defense, however, was the storyline.

The Panthers were led by nine tackles from Seth Branham, while Jaxson Drake and Jake Ingram both had six tackles. Perkins and Andrew Fields both made big plays as well with an interception and fumble recovery.

Pelham will now host rival Helena next Friday in a battle of two teams sitting at 2-0 in region play.