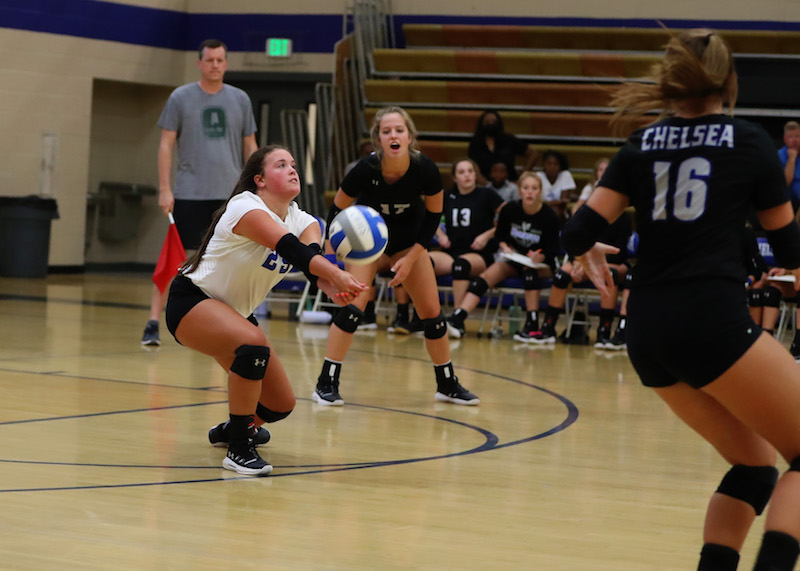 The Chelsea Hornets won 10 consecutive sets on Saturday, Sept. 9 to sweep through the Moody Invitational with five match wins. (For the Reporter/Cari Dean)

MOODY – Since their second loss of the season against Alexandria on Thursday, Sept. 9 in a tri-match that also featured a win against Lincoln, the Chelsea Hornets have quickly gotten back to their dominant ways.

Just two days later, the Hornets traveled to Moody High School to compete in the Moody Invitational, and the Hornets put together their third impressive Saturday of the season.

With two other Saturdays of at least three wins, winning their own tournament and finishing runner-up at Briarwood’s tournament, the Hornets put together five consecutive wins without dropping a set in Moody’s tournament to claim the championship.

In the opening match against Isabella, the Hornets set the tone for a busy day that would feature five consecutive matches by a dominant showing featuring set victories of 25-9 and 25-11.

In the second set, the Hornets took on county foe Shelby County and put together another impressive effort.

Chelsea won the opening set 25-11, which paved the way for another sweep afer winning the second set 25-13.

Seven different players had at least two kills in the win, while Lauren Buchanan led the way with nine. Madison Moore totaled five aces to lead the team. Morgan Martin led the team in assists with 12, while Moore finished just one assist behind with 11. Sartin totaled six digs to lead the team.

With confidence continuing to grow, the Hornets then met tournament host Moody at the perfect time for the first of two matches.

Chelsea jumped out to a quick led in the opening set and never looked back en route to a 25-12 victory for a 1-0 lead in the match. The Blue Devils battled in the second set, but it wasn’t enough to overcome a confident Hornets’ group, who won the set 25-19 to continue its perfect trek.

Pohlmann and Carsyn Polk both totaled four kills in the win, while MacKenzie Pierce and Addison Evans each added three. Sartin led the team with seven aces, while Martin and Moore had 10 and nine assists, respectively.

The Hornets then picked up one more win against the Blue Devils with set wins of 25-9 and 25-10, and went on to meet Isabella in the final match of the tournament.

It ended up being the tightest match of the tournament, but the Hornets still weren’t threatened to lose either set and finished off a perfect day of five match wins and 10 consecutive set wins in a 2-0 (25-18, 25-13) sweep.

Following the wins, the Hornets improved to 19-2 overall this season.