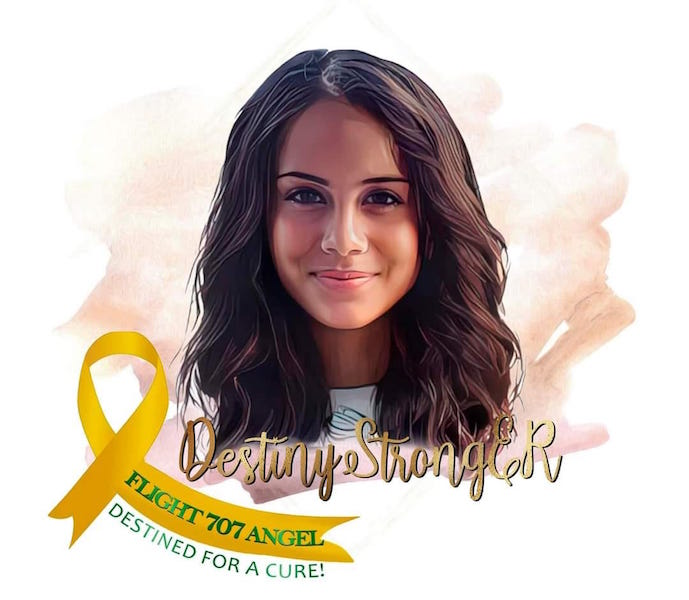 The logo for the Destiny StrongER Foundation depicts a slightly older and fully cured Destiny Riekeberg. The foundation will support families battling childhood cancer and raise money for research. (Contributed)

PELHAM – In her short lifetime, she inspired more people than most of us ever will. Now Pelham’s Destiny Riekeberg is the face of the Destiny StrongER Foundation, which seeks to aid other families battling childhood cancer.

The foundation was launched on Sept. 7 at 7:07 p.m., to reflect the time of Destiny’s passing on Sept. 17, 2020. The organization’s logo depicts the face of a slightly older and fully cured Destiny Riekeberg along with the words “Flight 707 Angel” and “Destined for a Cure.”

“Destiny has taken her flight at 7:07 as an angel, but we’re still in the fight for all the others who are battling,” said Destiny’s mother, Lacretia Riekeberg. “We are able to continue Destiny’s fight through her foundation, her fight for all the others. Because honestly, when Destiny was in the hospital, she prayed for all of her friends more than she prayed for herself.”

For any who might be unfamiliar with the story, Destiny was diagnosed with a rare form of liver cancer, hepatoblastoma, shortly after

Christmas break 2019. After a lengthy stay at Children’s of Alabama, she returned home in April but ended up back at Children’s for the remainder of her battle.

She attended Pelham Ridge Elementary and was active in her community, in cheerleading and other sports. In that time, she made many new friends—among them other children battling cancer—and won the hearts of many, even garnering nationwide attention.

Now the Destiny StrongER Foundation is spreading awareness of childhood cancer, particularly rare forms like Destiny’s, which was one out of a million.

The name comes from the hashtag #DestinyStrong the family used on social media throughout her battle, and the stylization is inspired by the way Destiny wrote it once.

Perhaps the most striking feature of the organization is its logo, which can be seen on the official website, Destinystronger.org, as well as Lacretia’s social media profiles.

It was chosen from among several designs and was submitted by a designer in Colombia, South America.

“This one came in and I opened it, and it took my breath away. It’s almost like Destiny went into this designer’s brain and said, ‘Create my logo like this as the way I look now’—now she is cancer free,” she said. “I feel it allows us to see her in the future and how she is now, and it’s such a blessing.”

The foundation operates out of the Riekeberg home. Lacretia serves as vice president and her husband, Dustin, is president; her sister Amber and lifelong friend Joy Gage both serve as officers.

In addition to board members, others involved include Destiny StrongER Ambassadors who support the cause, assist with fundraisers and are encouraged to start fundraisers of their own. They also share Destiny’s story and help point people to the foundation’s website.

“If you really want to support the cause you have to have a passion and a desire for it,” she said, noting that Cowell, from Massachusetts, was diagnosed with the same type of cancer as Destiny but was not diagnosed until the age of 18. “Izzy is a huge part of our lives now. She’s like family, and so is Hannah.”

Supporters can buy Destiny StrongER merch on the website, including official logo T-shirts, liver cancer bracelets, acorn charms that depict a significant symbol throughout Destiny’s journey, temporary tattoos featuring her original handwriting and more. Contributors can also donate to receive a bow to place on their mailbox.

Pelham’s youth league football teams and cheerleaders honored Destiny at a game on Wednesday night, Sept. 1, and Pelham High School is planning to honor her on Friday night, Sept. 17. In addition, the foundation will host an invitation-only launch party at the Riekeberg home on Sept. 18. There will be face painting, food, fun and even a TikTok station, followed by a balloon release at 7:07 in honor of Destiny as well as other children who have passed away from cancer. The names of children will be mentioned along with other information.

Lacretia said the plan is to turn the party into an annual event with the tag line “All That Glitters Is Gold.”

“We’re celebrating Destiny’s life, the launch of the foundation and we’re bringing awareness to childhood cancer all in one,” she said. “We’ll have lots of people coming out, friends and family, to celebrate the cause.”